GET NEWS AND ARTICLES IN YOUR INBOXPrint
A
A
Home | Wire | Where's the Demand? Oil Prices Drop Again

The average oil price last week came in at 45 dollars per barrel, according to the West Texas Intermediate measure, and oil prices dropped 3 percent yesterday due to declining demand.

This means oil prices haven't moved much at all since April, when the average weekly price was between 40 dollars and 44 dollars per barrel.

Back in April, OPEC and many in the investment world were predicting a fast turnaround in oil prices. Phil Flynn of the PRICE Futures Group, for example, predicted in January of this year that "crude oil is getting ready to party like its 1999." Well, there are still three months in the year, but in spite of The Fiscal Times' claim that "oil will rebound in 2016" an oil recovery this year is looking increasingly unlikely.

Unfortunately — for those banking on rising prices — the supposed cut in production never came. And, the predicted increases in demand have never been sufficient to close the gap between production and consumption. The IEA predicts the gap will close by next year, but that has yet to be realized. Initially, it was believed that production would immediately plummet in the wake of the 2014 crash, and a broad-based economic recovery would drive greater demand. We were told the drop in oil prices were almost exclusively a matter of excess supply — that growing demand would drive prices up again. But, the surging demand never materialized.

Well, it's been almost six months since then and oil prices remain down more than 55 percent from where they were in mid-2014. Oil prices bottomed out in February 2016 at around 30 dollars per barrel. Since then, prices have climbed more than ten dollars, but are certainly not approaching prices at a level that we might label a "recovery" from the perspective of 2014. 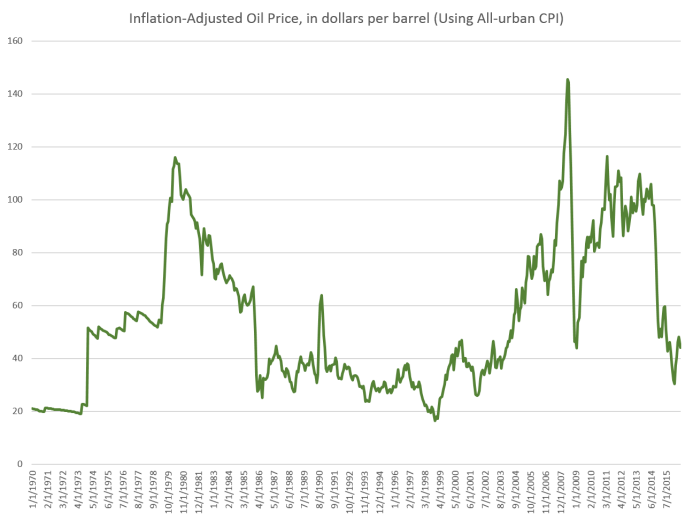 But why has production not fallen as much as was guessed? For one, the Saudis did not cut oil production as some thought they might. It turns out that Saudi Arabia is in financial trouble and has had to keep the oil spigot open to deal with its internal financial problems. Nick Cunninghom reported back in December 2015:

Saudi Arabia is under tremendous pressure. The Saudi government is considering slashing spending by a staggering 10% as it seeks to stop the budget deficit from growing any bigger. The IMF predicts that Saudi Arabia could run a budget deficit that amounts to about 20% of GDP.

The pain is manifesting itself in different ways. Not only will the Kingdom have to cut spending, but it has also turned to the bond markets in a big way. Low oil prices have forced Saudi Arabia to issue bonds with maturities over 12 months for the first time in eight years, raising 35 billion riyals (around $10 billion) so far in 2015.

By March 2016, it was becoming rather clear that OPEC countries were not going to significantly cut production, and the threatened "output freeze" never amounted to much of anything. Saudi Arabia and other OPEC countries badly need revenue.

Meanwhile, Saudi Arabia has recently regained the lead from the United States as the world's largest oil producer.

Oil extraction is generally more costly in the US than in Saudi Arabia, so lower oil prices have forced scaling back in the US. Bloomberg reports:

The drop in U.S. production came as the number of rigs drilling for oil and gas fell to a record low of 404 on May 20, according to data from Baker Hughes Inc. That number has since recovered to 508 as of Sept. 9.

Global production, however, has not plummeted as many predicted, which means demand is not outstripping supply, thus driving prices up.

Oil Demand is Not Growing as Anticipated

Matthew Parry of the IEA noted yesterday on Bloomberg that global oil demand is not what they expected. Led by China, India, and Europe, unexpectedly weak demand as meant that the IEA has had to "shave" its demand numbers.1

The US faces demand challenges as well. Domestically, housing prices continue to surge, limiting disposable income for many households who then spend less on gasoline. Meanwhile, US median incomes have been stagnant over the past decade, and workforce participation is still near a 30-year low. None of this points toward surging demand.

And, of course, demand in the US has been impacted by the dropping oil prices as the rig count in the US has declined, and oil jobs have disappeared. In the oil-boom state of Colorado, for example, the rig count dropped to a 16-year low in May, although it has recovered somewhat since then. But, when we look at employment in Greeley, Colorado — the center of the state's oil boom — we find that there have been no net employment gains at all since 2014. When we multiply this phenomenon across other oil boom states including Texas and North Dakota, we discover a real impact in terms of earnings, and thus lackluster demand for all goods and services, including oil-based products.

Put simply: there does not appear to be a secret reservoir of demand hiding in the wings to drive up oil prices in the near future.

One other factor that may be of concern is what Liam Denning has called the "extend-and-pretend oil market" made possibly by record-low interest rates. Denning supposes that one of the effects of zero-interest-rate-policy has been to make it easier to sit on oil stockpiles. Writing in March this year, Denning suggests:

First, cheap financing is helping to keep bulging oil inventories in their tanks. Wednesday's weekly report from the Energy Information Administration showed, yet again, that stocks are far above normal levels.

Thanks to ultra-cheap loans, the carry trade in oil has kept oil off the market and in storage, preventing further slides in prices.

Secondly, lenders may be pursuing an extend-and-pretend strategy to avoid taking ownership of physical property of diminished value:

While banks must eventually pull lines of credit from struggling oil producers, they are no doubt loath to take ownership of leases and rigs in a bankruptcy situation, putting off the day of reckoning.

A third problem rises from the fact that, once interest rates begin to rise, the developing world's demand for oil may further decline, driving a new drop in oil prices:

The explosion of borrowing in emerging markets, especially when denominated in U.S. dollars, is a ticking time bomb for the global economy. When rates start rising, pulling the value of the dollar up with them, the pressure on not just oil companies but all heavy borrowers in developing markets will intensify. And it just so happens that the developing world accounts for all of the projected growth in oil demand over the next five years, based on the IEA's numbers.

Oil prices continue to point toward the mediocrity of our current economic "recovery." Oil prices are not in free fall, nor do the fundamentals point toward a surge in demand. Without growth in real wealth and real incomes, there's no reason to suppose demand will be sufficient to outstrip ongoing production from cash-strapped governments that need the income.

As with the stock market, oil prices have become increasingly reliant on predicting future central-bank action. With Janet Yellen and the Fed yet again hinting that it may raise rates, we're living through something akin to what we saw with the Dow Jones in the second half of 2015. Prices stagnate or fall as everyone's waiting to see if the Fed actually has the nerve to raise rates. If it does, we may see another episode of quickly dropping demand. 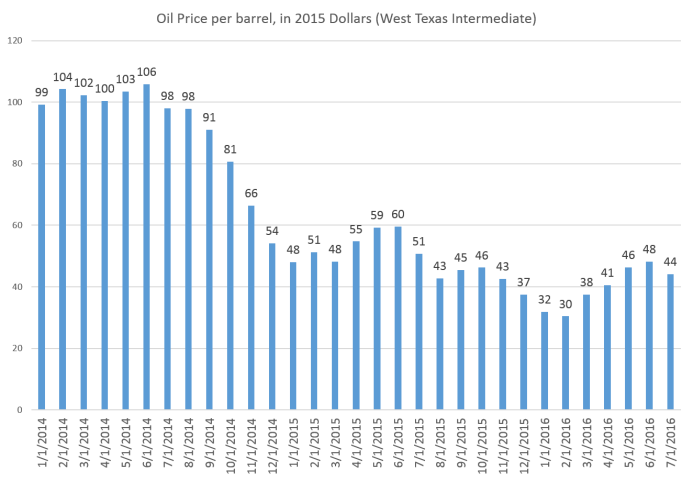 Why Property Rights Are Absolute, but Contracts Are Not

Because each person's control over his own body and will are inalienable, no person can be held to any sort of slavery "contract" even if all parties once agreed on it.

Cato's Letters on the "Loveliness and Advantages" of Political Liberty

As Ronald Hamowy put it, Cato's Letters is “unmatched for its breadth and vigor in the literature of the period.”

Will you help the Mises Institute build this new school of graduate economics today?

A Brief History of the Gold Standard, with a Focus on the United States

Arguments over the gold standard are not merely technical disagreements. Rather, the gold standard often serves as a proxy for “sound money,” which was a central element in the classical liberal tradition of limiting government’s ability to wreak havoc on society.

Trump's executive order providing a short deferment on payroll taxes is not really a tax cut. But many voters may perceive it as one.