GET NEWS AND ARTICLES IN YOUR INBOXPrint
A
A
Home | Wire | When Will the European Super-Bubble Pop?

When Will the European Super-Bubble Pop?

In early May, France elected globalist darling Emmanuel Macron. His victory gave the EU a short-term boost. However, it did not change the fundamental problems with Europe’s artificial mega-state.

The EU was built upon a foundation of sand, doomed to failure from the very start. The idea was ill-fated because the Swedes and the Sicilians are as different from each other as the Poles and the Irish. There are linguistic, religious, and cultural differences, and big differences in the standard of living.

Artificial political constructs never last. The EU is great for the “elites” in Brussels; not so much for the average citizen.

Meanwhile, there’s a centrifugal force even within these European countries. In Spain, the Basques and the Catalans want to split off, and in the UK, the Scots want to make the United Kingdom quite a bit less united.

You’ve got to remember that before Garibaldi, Italy was scores of little dukedoms and principalities that all spoke their own variations of the Italian language. And the same was true in what’s now Germany before Bismarck in 1871.

The chances are better in the future that the remaining countries in Europe are going to fall apart as opposed to being compressed together artificially.

I think it’s unlikely the Europe of tomorrow will look anything like the picture below. 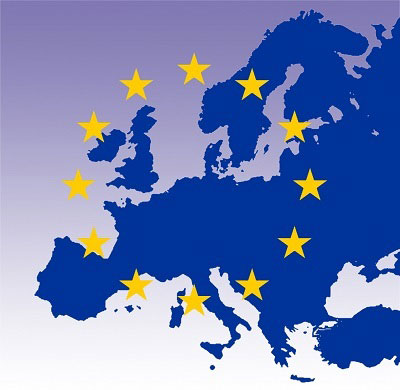 A Fool’s Vision of Europe’s Future

Europe is far more likely to splinter and eventually resemble the map below. It shows what Europe would look like if all its current separatist movements were to succeed. 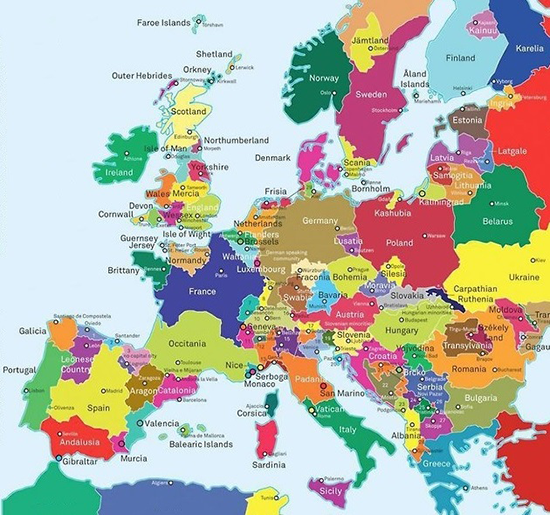 But the situation is actually much worse.

GDP measures a country’s economic output. However, it’s highly misleading. Mainstream economists count government spending as a positive when calculating GDP. A more honest approach would count it as a big negative.

In Italy, government spending accounts for a whopping 50%-plus of GDP. Remove that from the calculation, and I suspect we’d see how hopelessly insolvent the Italian government truly is.

In other words, Italy is flat broke.

I don’t see how the Italian government could possibly extract enough in taxes from the productive part of the economy to ever pay back what it’s borrowed.

Meanwhile, Italian Government Bonds Are in a Super Bubble

They’re currently trading near record-low yields. (When bond prices go up, bond yields do down.)

Over $1 trillion worth of Italian bonds actually have negative yields.

It’s a bizarre and perverse situation.

Negative yields could not exist in a free market. They’re only possible in the current “Alice in Wonderland” economy created by central bankers.

This is stunning. It means that Italy’s financial system depends completely on ECB money printing.

Italian government bonds are, without a doubt, in super-bubble territory. It won’t be long before a pin pricks this bubble and… pop.

That could happen soon.

And Mario Draghi, the head of the ECB, recently announced that after five years of manic money printing, he’s finally achieved his wrongheaded goal of 2% inflation.

Inflation is one of the most misused words; few even think about its actual meaning. What is inflation? “Well, that’s prices going up.” No, it’s not. To say that is to confuse cause and effect. Inflation is an increase in the money supply. You inflate when the money supply is increased by more than real wealth increases.

Prices go up as a result. People have forgotten about that. Today, inflation seems to come from out of nowhere, like a freak storm. No cause. Unless it’s blamed on the butcher, or the baker, or an evil oil company. Nobody ever thinks it’s a central bank—the Fed in the US—that actually creates more money, and causes inflation.

People who say that a little inflation is a good thing are dangerous fools.

Now that the ECB has reached its 2% inflation target, Germany and other EU countries are pushing the central bank to stop printing so much money.

Germany wants the money printing to stop. Italy wants it to continue.

But, since the ECB has reached its stated inflation target and Germany has crucial elections later this year, I think Germany will get its way. This is very bad news for Italy’s government and banking system.

Once the ECB—the only large buyer—steps away, Italian government bonds will crash and rates will soar.

Soon it will be impossible for the Italian government to finance itself.

Italian banks—which are already insolvent—will be decimated. They hold an estimated €235 billion worth of Italian government bonds. So the coming bond crash will pummel their balance sheets.

It’s shaping up to be a lovely train wreck.

I think we’ll see a full-blown crisis in Europe soon.

So, why should Americans or anyone outside of Europe care?

The EU is the world’s largest economy.

The euro currency is the second most widely held currency in the world.

The Financial Times commented on what would happen if the EU were to collapse: "It would probably lead to the most violent economic shock in history, dwarfing the Lehman Brothers bankruptcy in 2008 and the 1929 Wall Street crash."

A crisis in Europe would send a lethal lightning rod through the world’s currency and stock markets. Unparalleled economic turmoil — far worse than 2008 — could follow.