What If Taxpayers Could Choose if Taxes Went to the State Level or Federal Level? | Mises Wire
Skip to main content

GET NEWS AND ARTICLES IN YOUR INBOXPrint
A
A
Home | Wire | What If Taxpayers Could Choose if Taxes Went to the State Level or Federal Level?

What If Taxpayers Could Choose if Taxes Went to the State Level or Federal Level?

Most recently, we looked at decentralizing the welfare state, and found that each US state is more than wealthy enough and big enough to run its own welfare state at the state level without any need of planning or centralization through Washington, DC. Whether or not one thinks a welfare state is a good or necessary thing, the fact remains the US government is not an essential part of the equation. 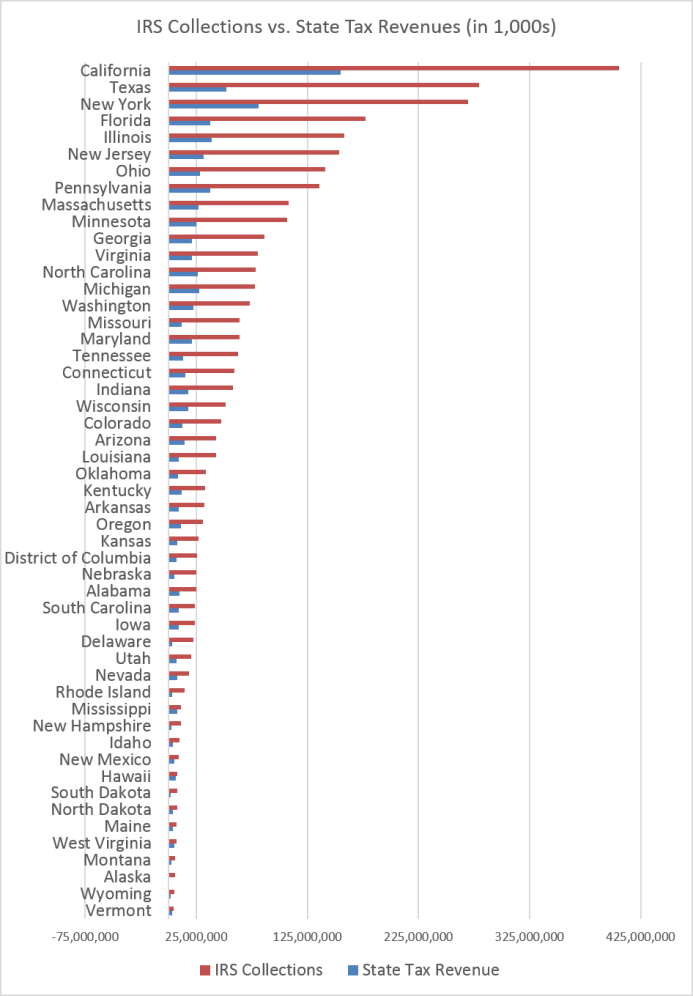 Let's look at it another way:

Of all the state-level and federal-level tax money squeezed from Georgia residents, only 19 percent of it goes to the state government.

In the second graph, we can see how much of the tax revenue produced by each state's residents (in dollars) go to either state or federal levels.2 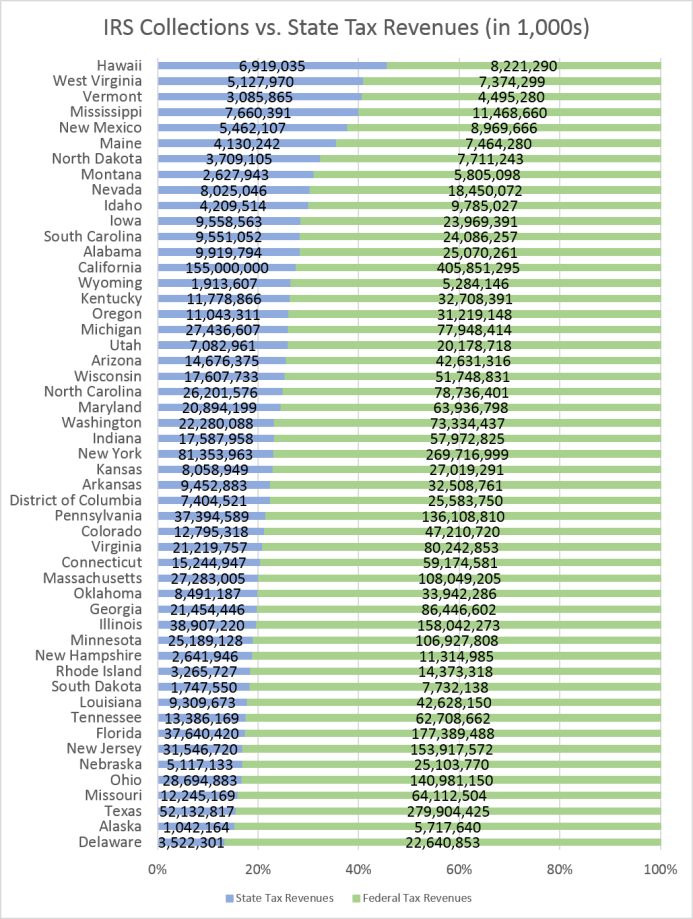 This could be due to several things. In states where a high percentage of tax revenue goes to states, this may be due to low incomes, since federal revenues are heavily dependent on wages and income. A low income state may nevertheless collect state level sales taxes, property taxes, and other taxes. This may then drive a relatively high amount of tax revenue to the state. This may very well be the case in West Virginia, New Mexico, and Mississippi where incomes are relatively low.

In some cases, though, the states at the top of the list may simply be high-tax states that collect a lot of revenue. Indeed, Hawaii, Vermont, and Maine are all relatively high-tax states according to the Tax Foundation.

in every state, rich or poor, high-tax or low-tax, the federal government is getting the lion's share of taxes wrung from the pockets of the taxpayers.

But, most of that ends up being spent in the states, anyway. So, an obvious question presents itself: why send all that money to Washington first? Why not just spend it where it originates?

More importantly, why not let the taxpayers themselves have more of a say over where that money goes in the first place?

It would be ... instructive to allow the various [taxpayers] to check off what specific services or agencies they wish to earmark for expenditure of their funds. It would be still more fun to see vicious and truthful competitive advertising between bureaus: “No, no, don’t contribute to those lazy louts in the Department of Transportation (or whatever), give to us.” For once, government propaganda might even prove to be instructive and enjoyable.

But Rothbard's reform here is too timid. It assumes that the tax monies must first go to Washington, DC.

But what if the taxpayers could decide — holding the total size of the tax bill constant, for the sake of argument — what level of government they wanted their tax money to go to.

In the spirit of Rothbard's reform, let's allow the taxpayers to check a box deciding whether or not their tax dollars will go to DC or if they'll simply be sent directly to state or local government.

Then we'll see just how much the taxpayers think they need federal bureaucrats do divvy up their money and eventually send some of it back to the taxpayer's home state.

It's a safe bet that the amount of federal revenue would decline under such a reform. Yet, not all taxpayers would want their tax revenues directed to the state and local levels only. After all, there is a very large number of Americans that live off federal tax revenue, whether they're Social Security recipients, military personnel, or highly paid engineers who fancy themselves as "private sector" workers, but who are really living off tax revenues as defense-contractor employees.

Looking at a map of federal spending on a state-by-state basis, we might guess which states might see a relatively small amount of tax revenue directed to the state level by taxpayers in our little experiment. 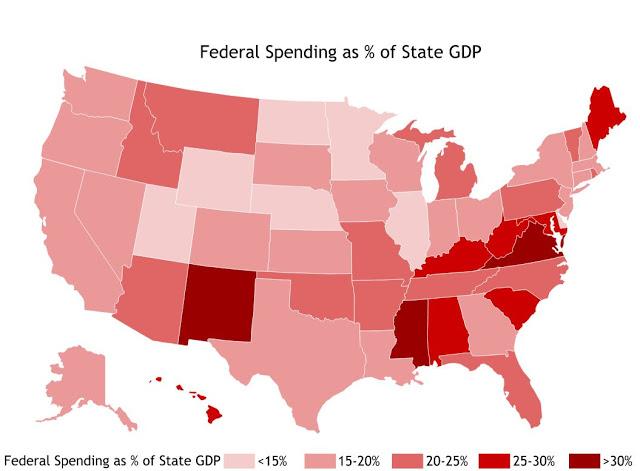 But even within these states, we'd see interesting conflicts among taxpayers. Younger workers, for example, might want their tax money to go to the state and local levels where their young children would benefit from state and local spending on schools. This would be in direct conflict with Social-Security recipients, of course, who live off the sweat of the brow of current wage earners, and who are more interested in getting a government check than in funding schools.

In that case — as Rothbard might suggest — it would be fun to see the AARP run ads denouncing young workers for directing their funds away from federal programs and ignoring old pensioners.

We might see similar conflicts between private sector and public sector workers. Small business owners might be more likely to appreciate state-funded and locally-funded amenities such as roads and local law enforcement. Your local plumber might be less enthusiastic about shipping his money off the Washington to fund the invasion of yet another country he's never heard of.

On the other hand, a reform like this would allow states like California to achieve the more "enlightened" welfare state the state has always wanted. After all, this is a state that wants its own Canada-style single-payer health care system. Where the tax revenues produced by Californians kept the state, Californians could have their long-desired social-democratic paradise. The plus side is the rest of us wouldn't have to pay for it.

Ryan McMaken (@ryanmcmaken) is a senior editor at the Mises Institute. Send him your article submissions for the Mises Wire and The Austrian, but read article guidelines first. Ryan has degrees in economics and political science from the University of Colorado and was the economist for the Colorado Division of Housing from 2009 to 2014. He is the author of Commie Cowboys: The Bourgeoisie and the Nation-State in the Western Genre.

Although national tragedies tend to bring a country together, it seems clear that the coronavirus will leave America as divided as it has been in modern history.

The state currently enjoys a vastly unbalanced share of the power within a society, such an arrangement is not in any way preordained, and the assumption that it must be betrays a narrowness of vision and a lack of historical knowledge.

The Fed Is Doing "Whatever It Takes" to Prop Up the Economy. That's a Very Bad Thing.

Why Didn't the 1958 and 1918 Pandemics Destroy the Economy? Hint: It's the Lockdowns

Most of the world's regimes enthusiastically destroyed their economies and consigned millions to destitution (and a rising tide of resulting health problems) in pursuit of a trendy and unproven theory. There's still not evidence that the lockdowns worked.