GET NEWS AND ARTICLES IN YOUR INBOXPrint
A
A
Home | Wire | Trump's Speech: a Budget-Busting Spending Spree

Donald Trump's speech to a joint session of Congress this week has been hailed as good politics from both supporters and opponents alike. The Washington Times declared that Democrats were left "befuddled, in ruins" after the speech. Meanwhile, CNN's Van Jones fell for what should have been regarded as cynical theatrics: Trump's parading out the widow of a dead Navy SEAL — a soldier who died in a botched raid ordered by Trump himself. This display prompted Jones to declare that Trump "became president of the United States in that moment, period.”

Trump hit all the right rhetorical beats with soaring language about the future and "we" and "us" doing wonderful things together while un-ironically declaring that "Everything that is broken in our country can be fixed. Every problem can be solved. And every hurting family can find healing, and hope."

Perhaps more alarming, however, are the more concrete declarations about policy. This wasn't just a speech in which Trump promised to solve everyone's problems. He promised to make government bigger, more active, and a lot more expensive.

And, of course, a lot of people loved it.

No Cuts to Spending

Since the very beginning of his campaign, it has always been apparent that Trump has never had any interest in cutting government spending. Like most politicians who vow to run government "like a business," Trump imagines that he'll just spend taxpayers' money "better" than others.

But none of the reforms favored by Trump have ever included making any substantial cuts to federal spending whether it be on the military or on social spending. He hasn't even talked about freezing government spending or slowing it down.

However, he has also given no indication that he plans to reduce Medicaid (12 percent of the budget, and quickly growing) either. Says Trump in his speech: "we should give our great State Governors the resources and flexibility they need with Medicaid to make sure no one is left out."

In other words, don't expect any Medicaid cuts.

So, right off the bat we know that Trump has no intention of touching half the federal budget: 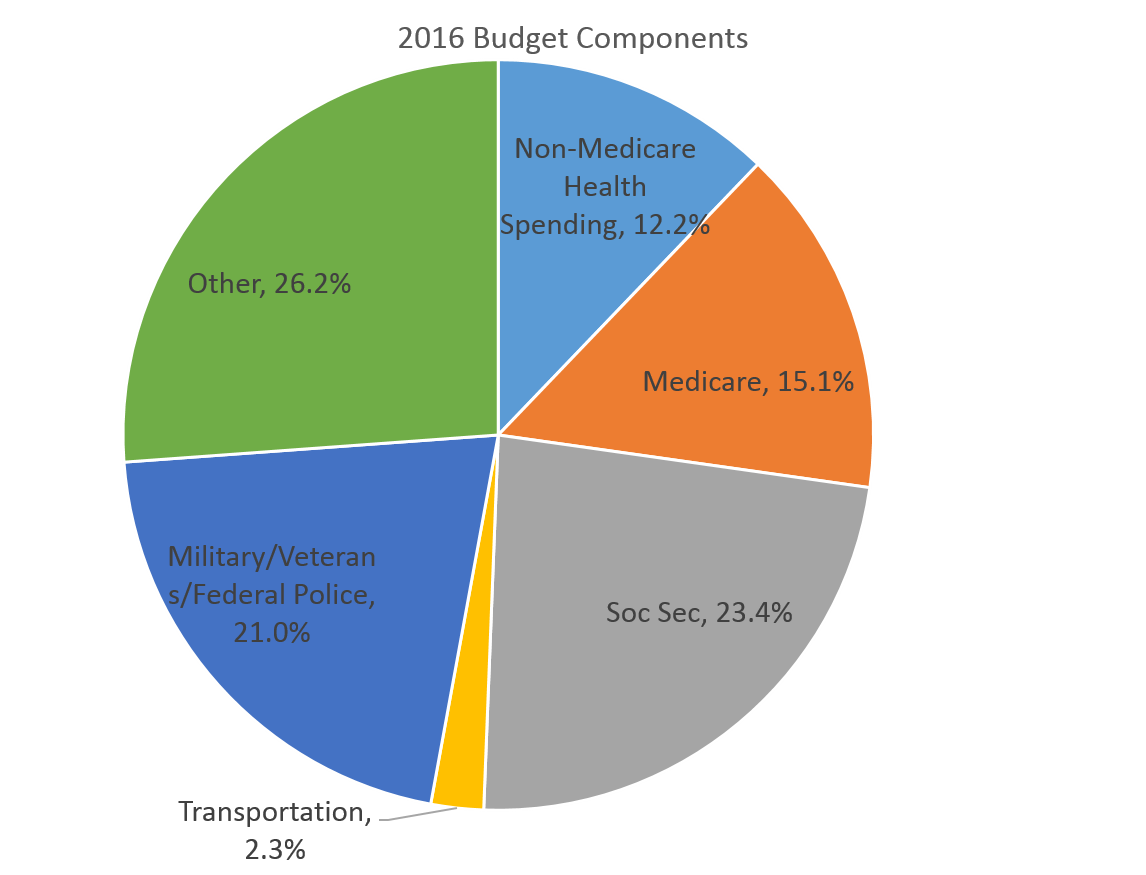 But of course, Trump isn't going to stop with simply not cutting anything. He plans to actively increase government spending above and beyond the continual growth we see in social spending.

Trump has pledged what he calls "a $1 trillion investment" in additional spending on "infrastructure." It's unclear if this is outright government spending or loan guarantees and other crony-capitalist strategies designed to funnel taxpayer money to "private" companies receiving government funds to build roads.

Given that federal spending on transportation in 2016 was 90 billion dollars, an additional $1 trillion would be an enormous increase over current spending levels.

And, of course, there is the border wall, which one could conceivable classify as "infrastructure" if one were so inclined. Even if we use the low-ball GOP figure of 15 billion for the wall's costs, that in itself would amount to one-sixth the cost of all transportation spending — which is largely infrastructure spending — in 2016.

On top of it all of this is more proposed spending on military and law enforcement such as the border patrol.

In the speech, Trump announced: "I am sending the Congress a budget that rebuilds the military." This claim is itself based on an absurd premise since the US military is already funded at level above Reagan-era Cold War levels. Nevertheless, Trump has already proposed a $54 billion dollar increase to military spending, which would be an increase of nearly 9 percent over 2016 levels.

But Trump doesn't plan to stop with just Pentagon spending. He has re-energized the federal War on Drugs, threatening states that have legalized marijuana, while giving the Drug War a prominent place in his speech:

"We will stop the drugs from pouring into our country and poisoning our youth — and we will expand treatment for those who have become so badly addicted."

Military and federal law-enforcement spending makes up over 21 percent of the total budget, while transportation spending accounts for an additional 2 percent. Once we add this to the more-than fifty percent of the budget that's off-limits social spending, we're now looking at about 75 percent of the federal budget that Trump indicates he will either leave to Congress or will actively seek accelerated spending.

What Will He Cut?

That leaves 25 percent of the budget from which to make major cuts in order to pay for Trump's spending plans. How does he propose to do that?

Trump has already indicated he plans "to pay for his military spending increase by cutting $54 billion from other parts of the federal budget."

Will he cut from poverty programs like disability insurance and food stamps and housing programs? It's possible, but it's going to be tough going politically. Poverty-related programs are popular among voters.

Moreover, that "other" 25 percent of the budget is already shrinking since Medicare, Medicaid, and Social Security are crowding out those programs. Baby Boomers are retiring and driving up retirement-based social spending while Medicaid continues to expand as a result of Obamacare. While it's true that Trump plans many reforms to Obamacare, cutting back on Medicaid-based subsidies is not one of them. 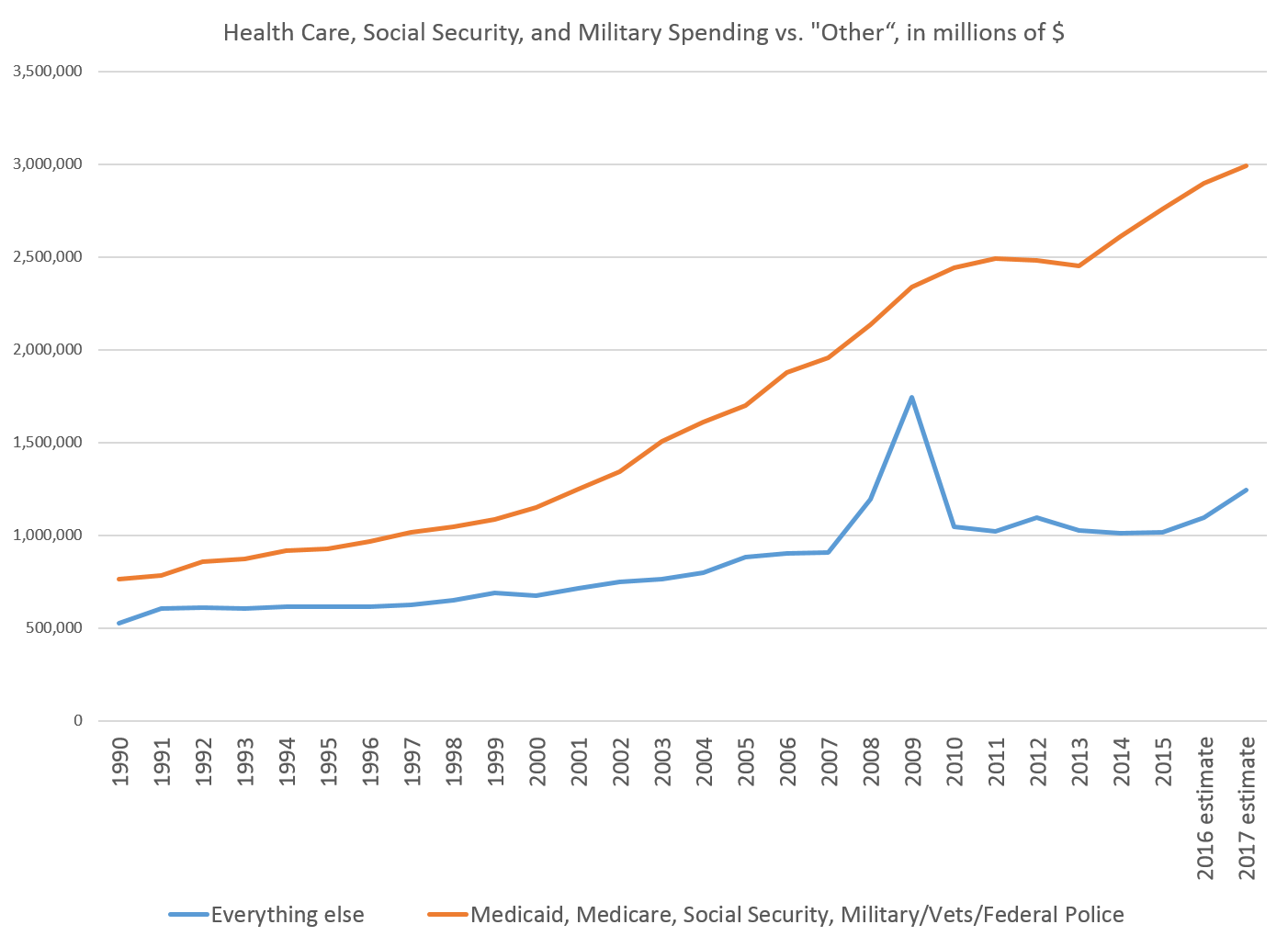 And, of course, all of this totally ignores the budget deficit, which was more than half a trillion dollars in 2016. If Trump wanted to be at all serious about deficit reduction, he'd already be talking about cutting 50 billion from overall spending, and that would be just a small dent in the deficit. But, where is Trump going to propose an additional 50 billion in cuts on top of the 54 billion he'll need to cut to finance his military spending plans? And then, on top of that, he'll need to make cuts to cover his infrastructure plans.

Once we start looking at the numbers, we quickly see that the only realistic scenario to come out of this is more federal spending and zero deficit reduction. Unless tax receipts pick up substantially, we'll likely see bigger deficits.

RELATED: "Tax Cuts Without Spending Cuts Are Pointless" and "Why Government Spending Matters More than the Size of the Deficit"

And, as we know, bigger deficits mean one thing: more money printing and more of the hidden tax known as inflation. It also means future taxpayers will be on the hook for more interest on the debt.

Trump wasn't about to let any of this get in the way of a good speech, though.

As many presidents have already proved, you can't go wrong with making a long laundry list of promises to the voters. Promise not to cut any of their social benefits, and promise to increase spending elsewhere. It's a winning political formula.

Unfortunately, as far as budget realities go, the plan doesn't look quite so solid.

Money laundering is illegal in the USA, but like so many other federal crimes, it is difficult to identify and define. That is the perfect recipe for government abuse of innocent people.