When one takes a closer look at federal budgets over the past decade, one is sure to notice a watershed budget year: 2009.

This was the year that federal outlays increased by a whopping 18 percent (in inflation-adjusted dollars) from the previous fiscal year.

How to interpret this budget increase, however, remains controversial because both presidents Obama and Bush are responsible for portions of the budget. the 2009 budget is bipartisanship at its worst.

Thus, when comparing budget growth between the two administrations, we have to first decide which administration gets the credit — or, more accurately, the blame — for the big spending increases in 2009 (underlying budget data is in constant 2016 dollars).1 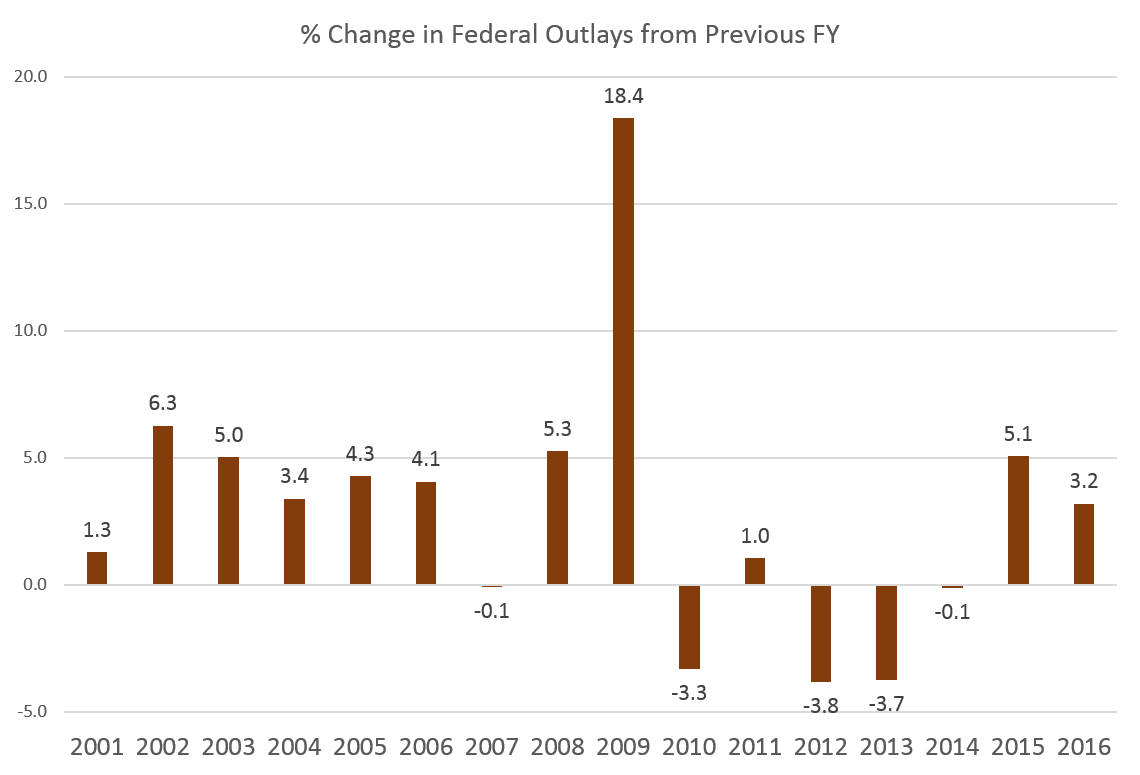 Now, if we were living in the mid-twentieth century, this would be an easy question to answer. Throughout much of the twentieth century — especially when there wasn't a world war on — federal budgets were approved months before the fiscal year began. This means that, but the time President Kennedy was sworn into office in January 1961, the FY 1961 budget had already been approved nearly a year earlier. In fact, back then, the fiscal year ended in June, so Kennedy would have been president only a few months before FY 1961 ended.

Kennedy had virtually nothing to do with planning the 1961 budget, and Nixon had very little to do with the 1969 budget.

But, things are a bit different today. Nowadays, not only does the fiscal year begin later — in October — but Congress waits much longer to pass a budget for the upcoming fiscal year, and it may not even finish before the new fiscal year begins. This is what happened in 2009.

As is customary, Bush submitted a budget early in the year before the new FY began. In his case, his submitted his 2009 budget in February 2008. Thus, Bush did have a lot of influence in how the budget took shape.

(All that grade-school civics stuff about the "power of the purse" of course, has never been an accurate reflection of reality. Presidents begin the budget process with their spending request, and are very influential in the process.)

The question remains, however: how much of the huge spending increases in 2009 should be attributable to Bush?

Indeed, the Bush administration's proposed budget totaled 3.1 trillion, which was the first budget ever that came in above three trillion. Had Bush received his request, then 2009's FY would have been a 4.9 percent increase over 2008.

This increase would have then been added onto sizable increases from the previous seven years, totaling an increase of 38 percent in budget growth since Bill Clinton's last budget in 2001.

This topic has already been debated repeatedly. One rehashing of the dispute followed the appearance of a 2012 article by Rex Nutting at Marketwatch in which Nutting attributed virtually all 2009 spending to Bush except for about 100 billion dollars attributed to Obama for that budget year. In response, rightwing columnist Brian Darling at the Daily Signal contended that most of the 2009 spending should be blamed on Obama. Darling, however, appeared to neglect the fact that Bush had already requested 3.1 trillion of that year's total outlays all on his own.

It appears that while Nutting was cutting Obama too much slack, Darling was doing the same for Bush. Meanwhile, Dan Mitchell at Cato has shown how Obama shouldn't receive all — or even most of — the blame for the huge FY 2009 deficit.

Of course, we will never know what Bush would have signed off on as president were he still president through the rest of fiscal year 2009, but it would appear reasonable to at least attribute to Bush what he, in fact, requested for the 2009 budget: 3.1 trillion dollars. Even this is a pretty pro-Bush position since Bush submitted this budget before the 2008 financial crisis occurred. It's likely had he submitted his budget later that year, his request would have been considerably larger.

Nevertheless, we can adjust the 2008-2010 budget transition period by attributing 3.1 trillion of it to Bush. The other 400 billion, however, we'll add on to Obama's 2010 budget. This method is crude, of course, since it makes 2010 spending much higher than it actually was — but if we average things out over the course of the administration, it gives us a decent look at overall growth.

In last week's article on this topic we looked at average growth rates for each presidential administration. In that analysis I attributed all of the 2009 budget to Obama. (In the past, I have used other methods.) But, even when we blame 2009 spending on Obama, we find that spending tended to grow more under Bush than under Obama.

(I've left out Gerald Ford's very short tenure. Ford was a big spender, but with only two years as president, one can't draw many conclusions about his term from this sort of analysis. Underlying budget data is in constant 2016 dollars): 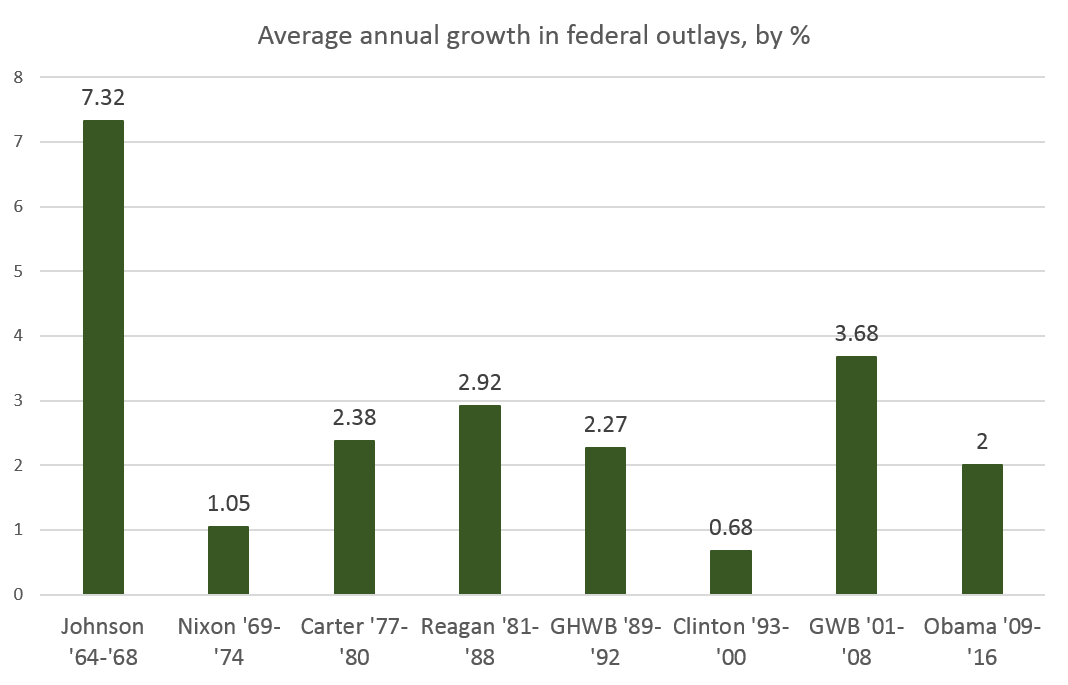 There really aren't any surprises here. Anyone who's been paying attention would have naturally suspected that Johnson has been the biggest spender since the Second World War, with Clinton as one of the smallest.

Now, if we more accurately attribute a portion of that 2009 spending to the Bush administration — namely the $400 billion not in the Bush budget request — we come to only a slightly different conclusion. However, to remain consistent, I've also applied the same method to all other presidents in the time period: ('81 goes to Carter, 2001 goes to Clinton, etc. Underlying budget data is in constant 2016 dollars). 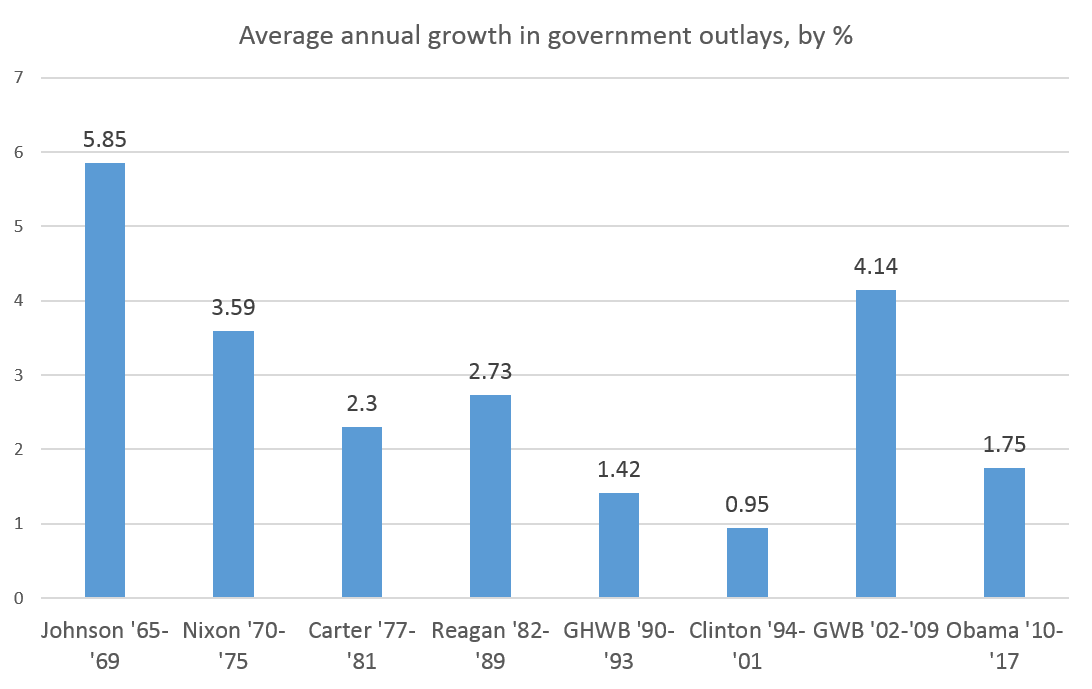 For some presidents, such as Carter and Reagan, this change in analysis didn't make much difference at all. For Nixon, it makes a big difference since 1975 was a big spending year. However, as expected, this change does increase Bush's spending, and reduces Obama's spending.2

But again, there shouldn't be any big surprises here. Johnson and Nixon were war presidents, and neither made any significant cuts to social spending. Johnson increased it substantially. Nixon was hardly a budget cutter. Similarly to Johnson, George W. Bush increased both social spending — as with Bush's Medicare Part D plan — and greatly increased military spending. At the end of his term, Bush supported a variety of stimulus programs, including the auto bailout and TARP.

One can argue, of course, that Obama gets off the hook easily because he was handed a huge budget by the Bush administration and needed do little to look like a budget cutter. This is true, but no one forced the Bush administration to sign off on spending growth of more than 30 percent during his tenure. In fact, federal outlays increased 25 percent while the GOP controlled both the White House and Congress from 2001 to 2007.

Certainly, in the wake of the 2009 "stimulus" Obama should have cut federal spending substantially, and at the very least should have returned federal outlays to where they were before the crisis.

This, incidentally, was what Ron Paul proposed — and more — during the 2012 presidential campaign. USNews reported in 2011 during the campaign:

If Rep. Ron Paul becomes president, he would cut his own salary to less than $40,000 a year, end five cabinet-level departments, audit the Federal Reserve, end all foreign wars, and trim the federal workforce by 10 percent. These and other cuts are part of Paul's "Plan to Restore America," released Monday, which details how he would decrease federal spending by $1 trillion during his first year as president and balance the budget by his third year...

On Paul's chopping block are the Departments of Energy, Commerce, Interior, Education, and Housing and Urban Development. He would privatize the Federal Aviation Administration and the Transportation Security Administration while freezing spending for most other departments. He also plans to repeal President Obama's signature healthcare law, as well as the Dodd-Frank and Sarbanes-Oxley financial regulations.

While Paul's plan was of course treated as "extreme" it was merely a cut back to 2005 budget levels, and was hardly radically austere by historical standards. Of course, such extreme cuts would not have been necessary in the absence of the profligacy of the GOP White House and Congress during that period, but Paul's cuts would have been a good start.

As it happened, though, the Bush administration handed Obama an enormously inflated federal government, and Obama needed to do little more than hold the line in order to have access to massive amounts of government resources. 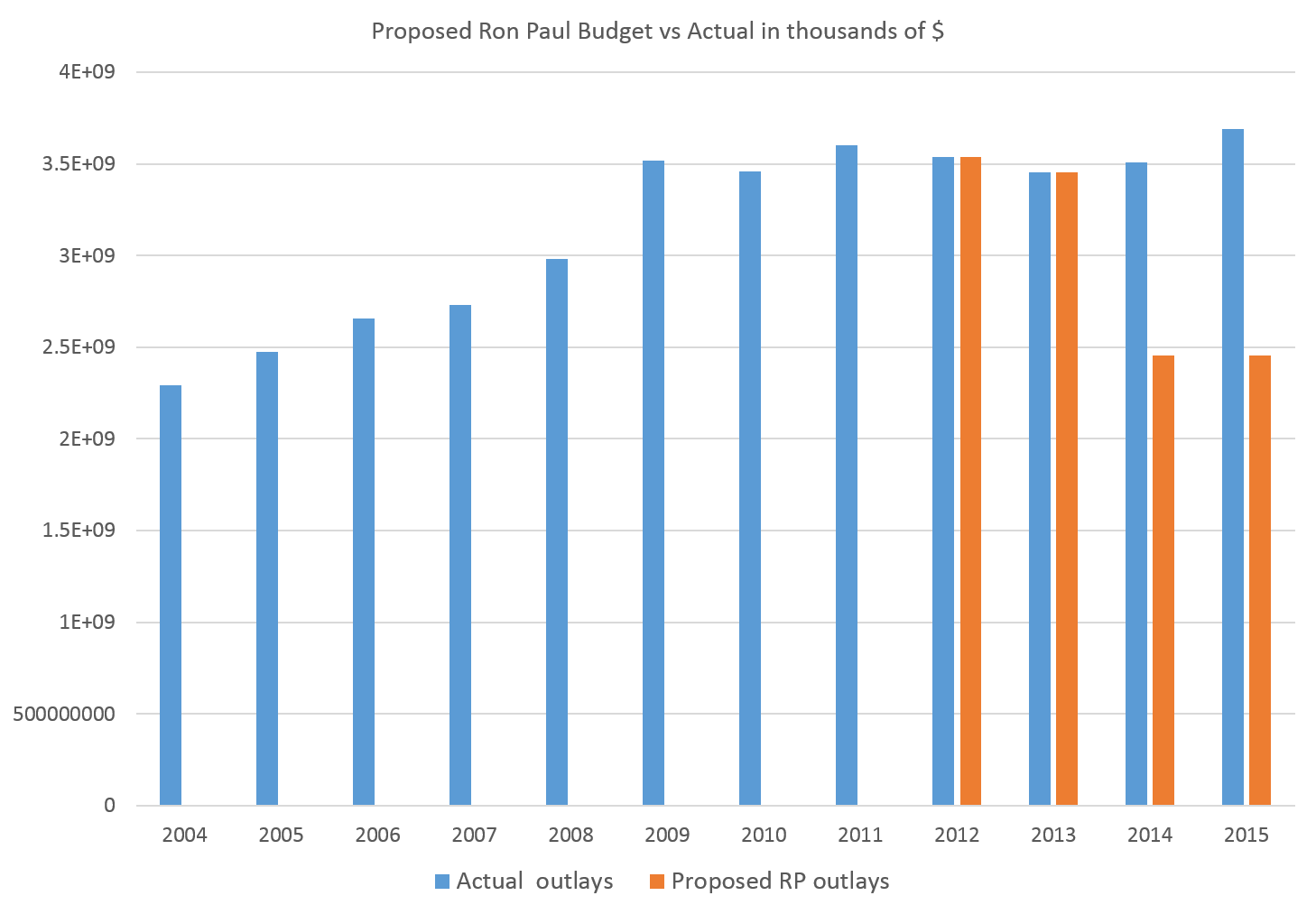 But What About Congress?

Many have claimed that one should look to congress for a better view of who's responsible for federal spending. I've already done that to a large extent in this article: "Gridlock in DC Does Little to Stymie Government Spending." The unfortunate truth is that there is plenty of bipartisan support for growing the federal budget.

But, it may be fruitful to go back and look again at periods where a single party controlled both the white house and Congress.

There are only a handful of these periods over the past 50 years (Underlying budget da is in constant 2016 dollars): 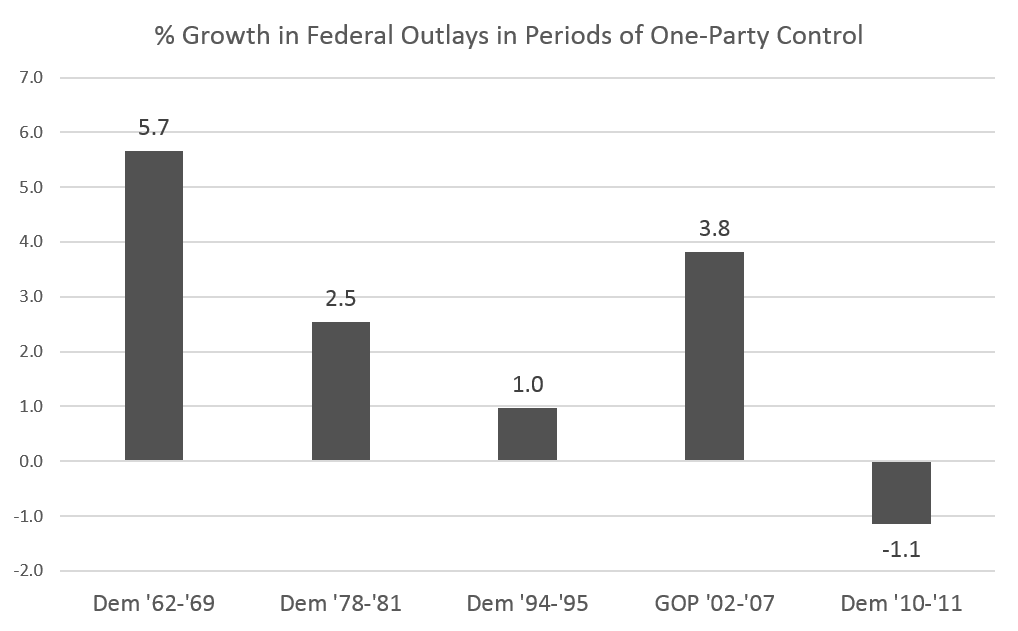 With the 2002 FY, the GOP gained control of the budget-making process in both Congress and the White House for the first time since the 1920s. It continued to have that control for six years. The Party spent freely, and spent more than when Carter and Clinton enjoyed single-party rule.

As we've discussed above, the 2009 budget was a "victory" for bipartisanship, so the first budget to be under total Dem control in the Obama years was 2010, with 2011 being the last before the GOP regained control of Congress. In this case, the Democrats slightly trimmed the budget, although thanks to the growth at the end of the Bush years, they were already able to spend freely. They could have spent more, of course, since they faced no veto from any GOP president or majority.

Will the GOP, which now controls both the White House and Congress, do what Obama should have done in 2010 and implement cuts taking fed spending back to 2008 levels? It's unlikely.