There's No Such Thing as an "American" Homicide Rate

In September, the FBI released new homicide data, and the overall US homicide rate rose for the second year to an eight-year high.

Homicide rates still remain well below where they were in the 1980s and 1990s, when homicide rates sometimes exceeded 9 per 100,000. 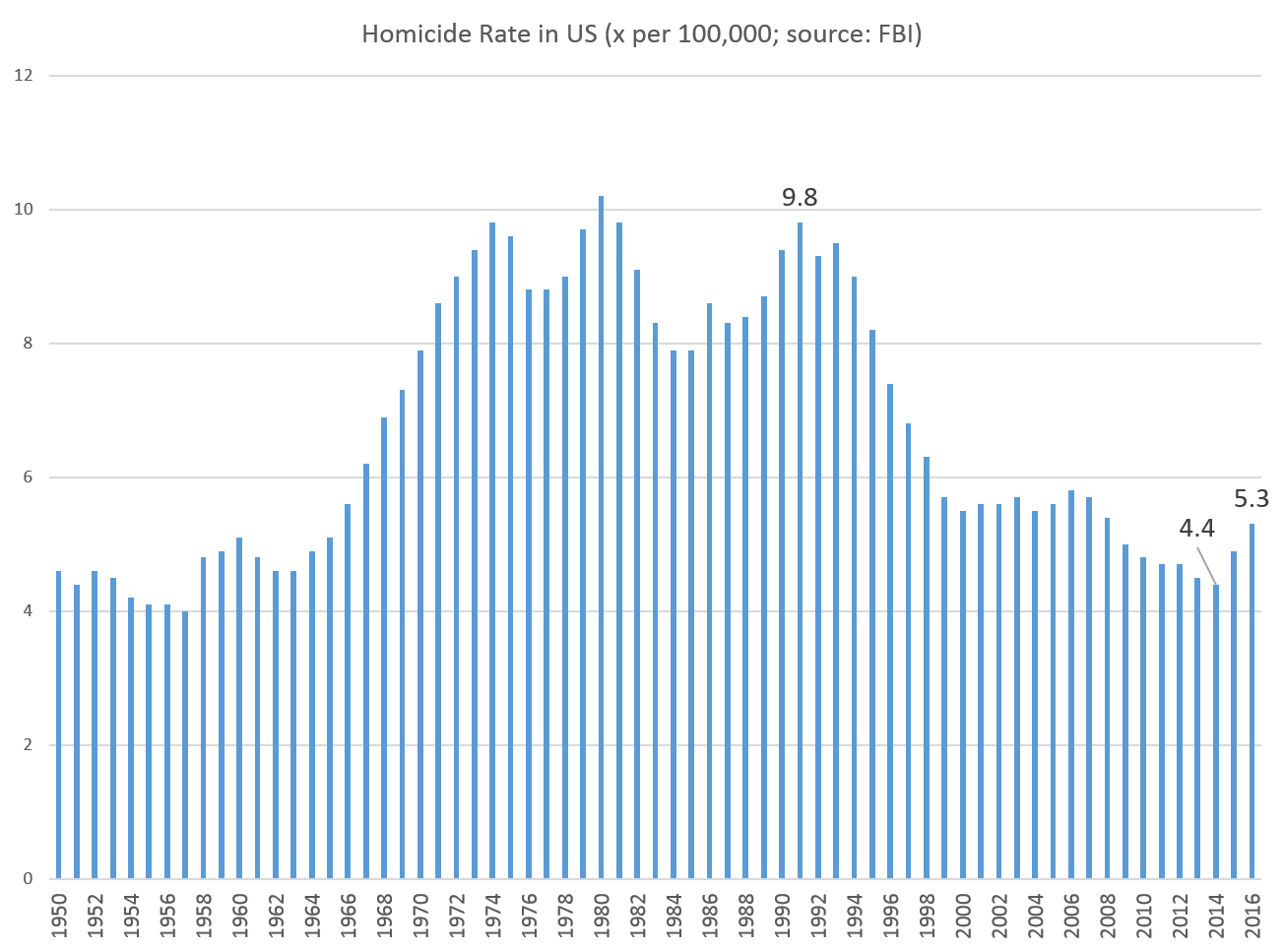 When it comes to making any serious analysis, however, nationwide homicide rates for a place as large as the United States are next to useless. When we look at numbers on a state-by-state basis, we find that homicide rates vary from 1.3 per 100,000 in New Hampshire to 11.8 per 100,000 in Louisiana.

To offer some additional context, I've included rates from Canadian provinces (using Canada's 2015 stats) side by side with US states: 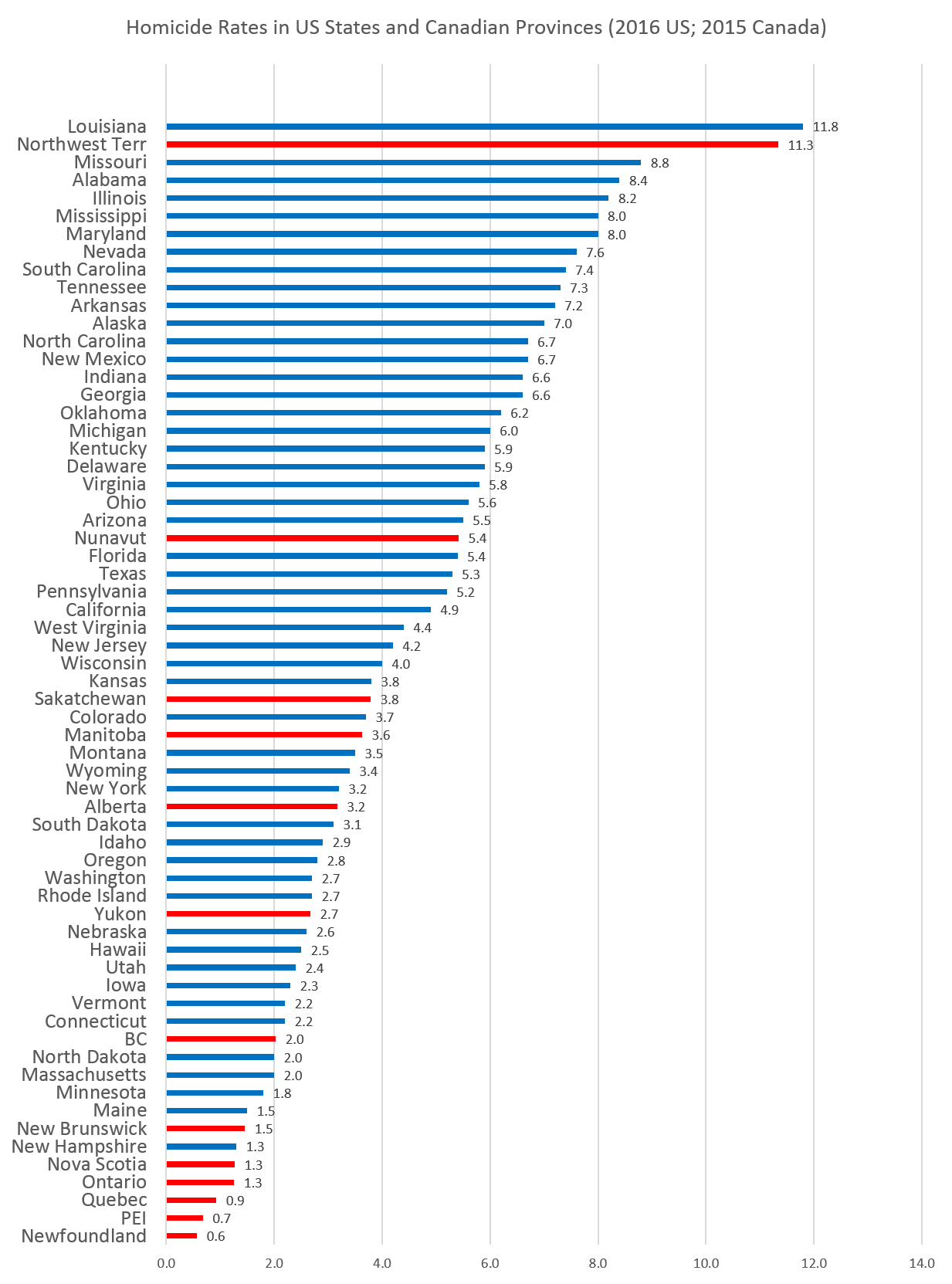 Presented as a map: 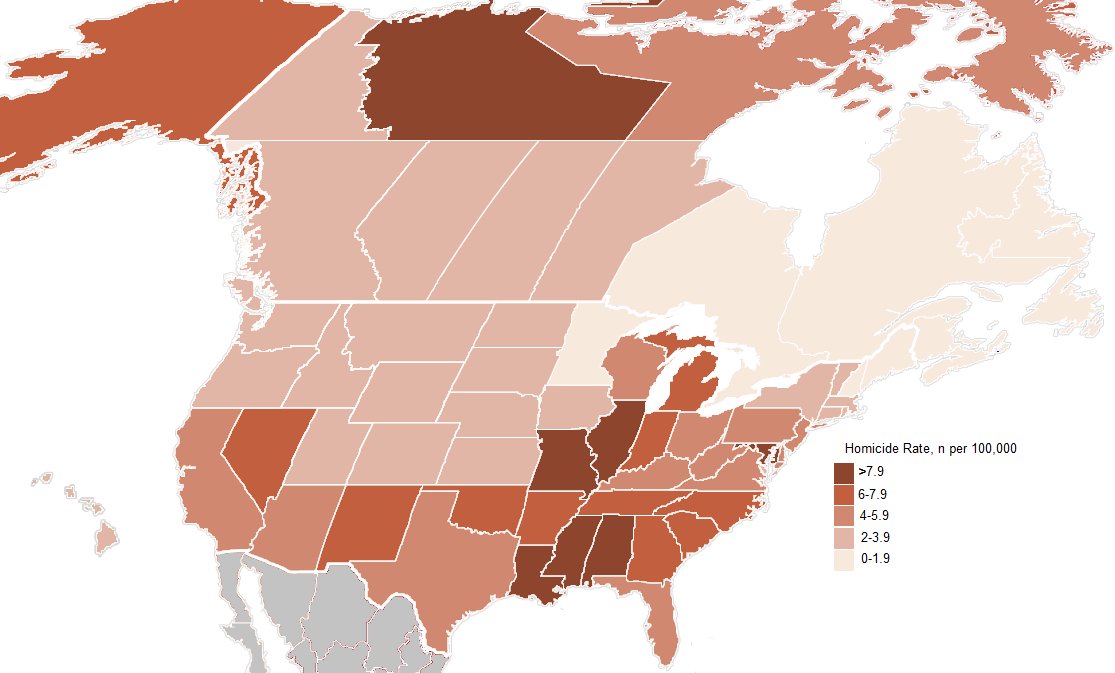 There are clear regional differences in many cases. States in the far north and far northeast of the United States report very low homicide rates while certain homicide "hotspots" apparently in Missouri, Maryland, Illinois, and the deep South are driving up US rates.

These details emphasize the mistake of speaking of the nationwide US homicide rate as if it were in anyway descriptive of any single trend or legislative reality in the US.

We often hear about homicides are rampant in "America" — presumably caused by high levels of private gun ownership — but any serious look at the numbers forces us to refine our question and instead ask why some parts of the US have some of the lowest homicide rates on earth, while the situation in other areas is considerably different.

What Are the Important Factors in Homicides?

Some places largely free of gun restrictions — like the Dakotas, Utah, Idaho, Minnesota, Vermont, and New Hampshire — have very low homicide rates. But other places with similar or more restrictive laws — such as Missouri, California, and most of Latin America — have much higher rates. Obviously, homicide rates are not simply a function of gun laws.

Even researchers on the political left are increasingly coming to terms with the fact that homicide rates are not simply a matter of passing prohibitionist laws.

One of the most recent examples of this is new research described by Leah Libresco at the Washington Times. Libresco noted that few, if any, of the gun bans being floated by policymakers is likely to be effective. Libresco notes:

…my colleagues and I at FiveThirtyEight spent three months analyzing all 33,000 lives ended by guns each year in the United States, and I wound up frustrated in a whole new way. We looked at what interventions might have saved those people, and the case for the policies I’d lobbied for crumbled when I examined the evidence...

I researched the strictly tightened gun laws in Britain and Australia and concluded that they didn’t prove much about what America’s policy should be. Neither nation experienced drops in mass shootings or other gun related-crime that could be attributed to their buybacks and bans. Mass shootings were too rare in Australia for their absence after the buyback program to be clear evidence of progress. And in both Australia and Britain, the gun restrictions had an ambiguous effect on other gun-related crimes or deaths...

…no gun owner walks into the store to buy an “assault weapon.” It’s an invented classification that includes any semi-automatic that has two or more features, such as a bayonet mount, a rocket-propelled grenade-launcher mount, a folding stock or a pistol grip. But guns are modular, and any hobbyist can easily add these features at home, just as if they were snapping together Legos. … [S]ilencers limit hearing damage for shooters but don’t make gunfire dangerously quiet. An AR-15 with a silencer is about as loud as a jackhammer. Magazine limits were a little more promising, but a practiced shooter could still change magazines so fast as to make the limit meaningless...

By the time we published our project, I didn’t believe in many of the interventions I’d heard politicians tout. I was still anti-gun, at least from the point of view of most gun owners, and I don’t want a gun in my home, as I think the risk outweighs the benefits. But I can’t endorse policies whose only selling point is that gun owners hate them.

What Libresco did conclude, was that a host of societal issues are driving much of what we hear about in terms of so-called gun violence. Mental illness, suicide, gang violence, and domestic violence are all important factors that drive gun violence. The problem, Libresco admits, is that simply prohibiting certain types of guns doesn't really address these issues.

(For similar articles, see Jeffrey Goldberg at The Atlantic and Justin Cronin at The New York Times.)

Other factors we've covered here at mises.org include sky-high incarceration rates in the United States, and how the history, residential mobility, and cultural heterogeneity of the Americas make the US and Latin America quite different from Europe and East Asia in terms of homicide and violence.

To understand the current trends, then, we have to look beyond a few headlines about rare mass shootings and look at larger demographics and societal trends. A focus on legislation, by contrast, tends to substitute wishful thinking for an understanding of the the complex reality.