GET NEWS AND ARTICLES IN YOUR INBOXPrint
A
A
Home | Wire | The Tea Party, Ten Years Later

December 16, 2017 is the tenth anniversary of the modern Tea Party. That fact will surprise many laypersons who uncritically accept the mainstream narrative that the Tea Party began on February 19, 2009 when Rick Santelli, live on CNBC from the Chicago Mercantile Exchange (CME), declared a rebellion against "socialism" one month into the Obama administration.

But wait a minute: Rick Santelli on establishment NBC lighting the spark of an anti-establishment rebellion? An uprising over mere proposed Obama bailouts of mortgage holders coming four months after silence over (if not a defense of) George W. Bush's $700 billion TARP bailout of Wall Street?

If the mainstream narrative seems fishy, that is because it is. What really happened ten years ago and how was the Tea Party transformed from a libertarian grass-roots movement to today's controlled (and just-about dead) establishment version? What are some of the lessons that can be learned?

The ground-zero event in the formation of the Tea Party occurred when supporters of Ron Paul's first presidential campaign registered the Web address TeaParty07.com on October 24, 2007 (below is Archive.org's snapshot of the site on November 13, 2007). 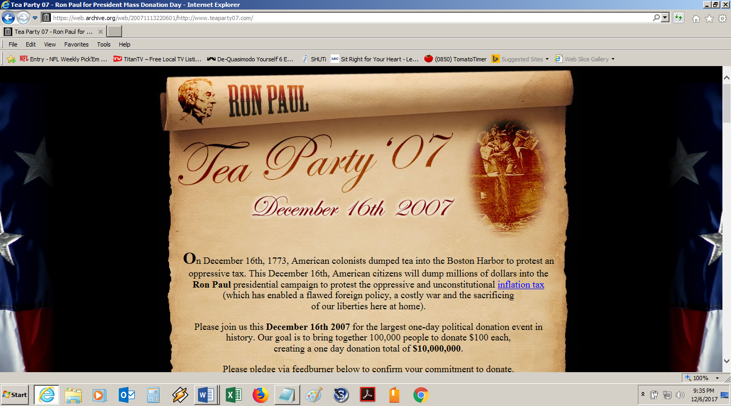 Twelve days later, on November 5, Guy Fawkes Night, Paul supporters held the first "money bomb" fundraiser, which (for Internet fundraising) raked in a record $4.3 million. Days after this came the anniversary of the Boston Tea Party. Paul supporters in Boston re-enacted the dumping of tea into Boston Harbor and a newcomer to politics, ophthalmologist Rand Paul, spoke at Faneuil Hall. A second money bomb held on this commemoration of the Tea Party raised over $6 million, shattering the previous record set eleven days before.

What was this schism on the American right about? It was a rebellion against the Bush Republican party's wars (in particular, the twin disasters of Afghanistan and Iraq), drunken-sailor federal spending (e.g., a $500 billion unfunded expansion of Medicare for a new prescription drug program), and a burgeoning post-9/11 federal spy and police state (e.g., the Patriot Act of 2001, etc.).

By February 2009, the GOP lay in complete tatters. In addition to its endless wars and domestic spending spree, it had added a $700 billion bailout of Wall Street after the financial crisis of 2008. (Never mind a series of smaller outrages such as a ban on incandescent light bulbs and the TSA, which should have been a private effort, if anything, from the beginning).

On top of all that, instead of nominating Ron Paul in 2008, the GOP had nominated conservative "war hero" John McCain and Alaska governor Sarah Palin. A war-weary public completely rejected the ticket in favor of a younger, articulate Barack Obama who promised peace and a revived economy.

The Santelli rant sparked the conservative and GOP establishments to transform a marketing vehicle that would serve to not only distract the public from their recent colossal policy failures, but also serve as a gold mine of self-enrichment: t-shirts, coffee mugs, bumper stickers, Taxed Enough Already (TEA) yard signs, fluff books from the conservative pundit class, Glenn Beck rallies promoted by the Fox News Channel, Rush Limbaugh iced tea, and children's books.

As Sarah Palin replaced Ron Paul as the face of the movement, a surreal change in advocacy followed. The anti-interventionist Tea Party, once outraged about the endless occupations of Afghanistan and Iraq, was now wanting the U.S. to attack and invade Iran. Rally chants of "End the Fed" eventually disappeared.

A Tea Party in February?

By 2014, the faux Tea Party's fifth anniversary, it was clear that the mainstream media were firmly devoted to advancing the new establishment narrative, as 2014 headlines such as "Tea Party Marks Fifth Anniversary" make clear.

Still, glaring inconsistencies remained. The grass-roots Paulist Tea Party began on December 16, 2007, the 234th anniversary of the original Sons of Liberty protest of 1773. The conservative and GOP forgery of February 19, 2009 was not connected to anything but the advancement of the corporatist interests of Conservatism Inc. and the GOP. Even its supposed founder, Rick Santelli, was quickly pushed offstage while the Fox News Channel, Glenn Beck, Sean Hannity, and others took center stage.

While the Ron-Paul Revolution, from the spread of homeschools to Austrian economics, continues on in educating people around the world, the Tea Party is all but completely dead. In the age of Donald Trump its lessons are more vivid than ever.

The two-party U.S. duopoly, which insulates itself from competition and outsiders through regulatory barriers such as ballot-access laws, front-loaded primaries, and super delegates, presents obstacles even to billionaires who wish to challenge it.

Trump was an outsider who promised a less interventionist foreign policy, full repeal of Obamacare, and a wall on the U.S.-Mexico border. The two-party cartel not only sunk these promises that Trump supporters wanted, but installed a special prosecutor to investigate wild allegations of Russian hacking to help elect Trump. Make America Great Again has yielded to bizarre rabbit holes such as bombing Syria and moving the U.S. embassy in Israel from Tel Aviv to Jerusalem.

On the opposite side of the aisle, the Democratic Party's sinking of Bernie Sanders holds the same lessons. Had progressives pursued decentralization instead of Obama's empty promises and the mirage of a Sanders presidency, California, Vermont, and Oregon could be much better prepared to separate from the rest of the U.S. and pursue their preferred policies from collectivist health care to sanctuary cities unhindered by the Trump administration.

Decentralization and autonomy is what the U.S., going back to the Articles of Confederation, was originally about. Those paths, instead of trying to wrest control of leviathan, would be far more effective in getting all sides much of what they want. As Brexit has shown, postponing the process only makes it more difficult to implement later on.

One Hundred Years of Medical Fascism

The introduction of Obamacare was only the natural evolution of many decades of increasing state control of the...