In modern America, government schools are one of the last remaining truly socialist institutions. And when I use the term socialism, I'm using the technical and old-school definition: government ownership of the means of production.

Although private schools do exist in America, schooling in general — especially at the pre-college level — is overwhelmingly delivered by government-owned institutions called "public schools."

Few other industries in America are operated this way, and this is true even when we include products and services essential to human life and safety, such as food and housing.

While the US did flirt with creating a large number of government-owned housing projects during the 20th century, housing is nearly all privately owned in the US today. Most government "affordable-housing" programs take the form of subsidies that go to private owners, whether for-profit owners who receive what were once officially called "Section 8" vouchers, or via other subsidy programs.

Similarly, food production and grocery institutions are overwhelmingly private as well. Nearly all Americans, when they go to a store to buy food, do so at a privately owned shop of some kind. In this case, of course, there are also government subsidies, but they take the form of vouchers often referred to as "food stamps."

Schools are one of the rare cases in which is simply assumed by a great many people that a government should be directly delivering a good or service through a government-owned facility instead of through subsidizing a private institution.

Are Vouchers the Answer?

Advocates for school vouchers would like to move away from this state-owned model by relying on a voucher system for education. This is already done to an extent in higher education, with subsidized loans, and even with outright grants for certain low-income households who send students to private colleges.

On a certain level, it is hard to object to this plan — when compared to the government-ownership model.

Imagine, for example, if other industries were run like government schools.

Imagine, then, that some reformers came along saying "hey, instead of selling government-owned food and housing, let's just give everyone a voucher and let them buy food and housing from whoever will accept the vouchers!"

Having several grocery stores to choose from is in most cases likely superior to a situation in which one has only the choice of a single government-owned store.

There is, however nothing novel in this observation or in the suggested solution. It's just the food-stamp model.

So let's not kid ourselves. Voucher advocates are simply advocating for a food-stamp model in education. It's no more innovative than that.

And while it's a good thing to avoid monopolistic government-owned institutions, that's where the advantages of vouchers end. In spite of this, school voucher advocates have long pushed the policy by claiming that a voucher system will somehow wean people off government money for education over time. And yet, there's no evidence to suggest this would actually happen. The use of vouchers for food has only gone up over time, because that's what government spending programs usually do: 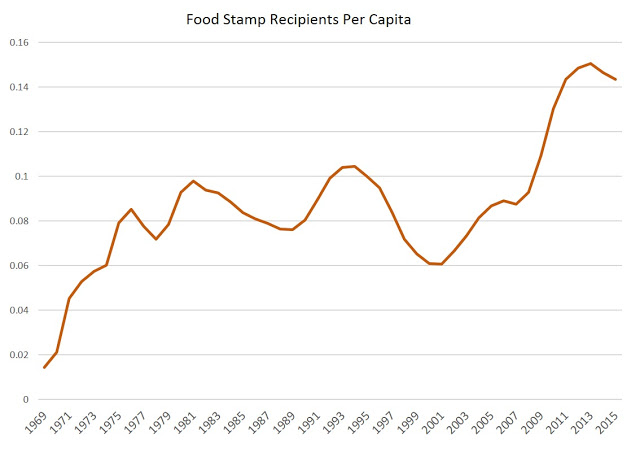 Choice is good, but unless the plan also reduces the overall role of government spending in schooling, no meaningful difference will occur in terms of state dominance of the industry. We'll still be facing an enormous number of workers and institutions who will depend on government taxation and spending.

After all, if most everyone is shopping at ostensibly private grocery stores using government vouchers does it really matter if the store if technically privately owned? No real marketplace would exist because most consumer spending would depend on government vouchers. As William Anderson writes:

Vouchers are nothing more than another rendition of Oskar Lange’s "market socialism." They are an attempt to "play market" using socialist hardware...

The same is true of schooling, and vouchers may simply result in adding a patina of "marketness" to a system that remains driven by government spending.

"Voucher-ization" Can Only Cut Government If Overall Spending Is Cut

Fortunately, in the real world, in spite of the existence of food stamps, government spending is not the primary driver of the grocery industry. This is because food vouchers — while now used by one in seven Americans — are still only a small part of the grocery marketplace.  Most grocery-store transactions remain, more or less, market transactions.

In the realm of schooling, however, only ten percent of students go to private schools.

Obviously, there would not be much of a private industry in any real sense of the word.

The reason that grocery stores remain largely private is that food stamps are means-tested, and only go to a small percentage of consumers The same is true of housing. Housing vouchers aren't simply handed out to every taxpayer. They only go to certain groups of people, who comprise a relatively small minority of housing consumers. For most people, housing is purchased or rented in a transaction that, for now, can still be described as largely private.

Similarly, to bring any meaningful change to schooling, education vouchers would have to be reduced to just a small part of the schooling marketplace. If they are not, then we end up with a situation akin to one in which everyone receives a housing voucher or food voucher from the government each month.

RELATED: "Four Reasons Why Government Spending Is Even Worse Than Taxes" by Ryan McMaken

All of this occurs regardless of whether education spending is done through vouchers or direct spending on government schools. The main problem is the spending, not the means by which it is distributed.

The only antidote to this is to actually cut government spending and to reduce its relevance in the education marketplace. A voucher system may be offer an advantage in terms of choices offered. The same is likely true in a health care system in which vouchers-funded hospitals would be preferable to government-owned hospitals. By itself, though, introducing vouchers means nothing in terms of shrinking the size of government. The only meaningful change will come with a reduction in spending. And that's true whether there are vouchers or not.

Should Libertarians Get behind States Waging "Humanitarian" Wars?

Fernando R. Tesón is all mixed up. He thinks libertarians' principled nonaggression ties their hands in the face of violence against others and that this limitation extends to good-guy states.

How Long Will This Recession Last?

Bottom line, it’s a recession at the moment; whether it gets worse depends on inflation, and policymakers goofing around whistling past graveyards should give anyone pause.