GET NEWS AND ARTICLES IN YOUR INBOXPrint
A
A
Home | Wire | Protectionism vs. Corruption: Which Is Worse for the Economy?

Protectionism vs. Corruption: Which Is Worse for the Economy?

The revulsion felt by many towards the two major party candidates this election is more than just a matter of personal feelings. There is an economic basis for the apprehensions that most people feel towards Trump and Clinton.

Free trade is essential for prosperity. Free trade allows the employment of people in different nations to shift towards areas of highest productivity. Economists have known about the advantages of free trade for centuries. In 1817 David Ricardo explained how free trade allows an international division of labor according to “comparative advantage.”

Is Political Corruption Even Worse than Tariffs?

Corruption, meanwhile, impairs economic efficiency and lowers living standards. The effects of corruption on economic development are explained, for the most part, by what Gordon Tullock termed as “rent seeking.” Rent seeking refers to the cost of using governmental powers to transfer wealth. Special interest groups lobby to use governmental powers for private gain, to carry out wealth transfers from the general population into their pockets. The resources devoted to transferring wealth could alternatively be used to produce more real wealth. Hence, corrupt practices of rent seeking make us all worse off.

Modern studies have long shown correlations between economic prosperity and freedom from both trade barriers and political corruption. If we graph data from the Economic Freedom index, we find: 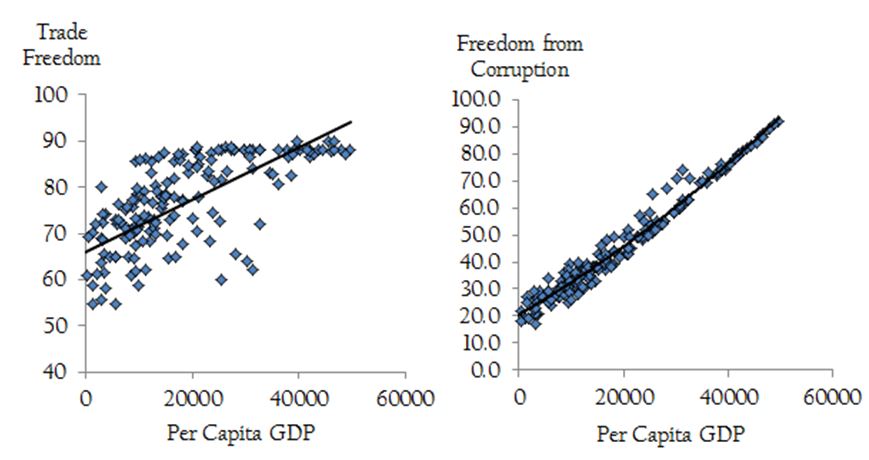 Some disagree with economists about free trade, and many of those support Donald Trump, who has repeatedly spoken against free trade. Those who want to restrict trade point to job losses. It is true that the number of manufacturing jobs in the US has declined, but this is not because of trade — technology has reduced the relative number of workers needed in manufacturing.

Opponents of free trade point to trade deficits as proof that free trade does not work. However, trade deficits are driven by budget deficits and capital inflows — by excessive federal outlays (a self-inflicted wound) — and by the desire of foreigners to invest in the US (a positive force for US workers).

The situation with Trump supporters is clear: many people do not understand how the global economy works, so they support bad policies.

The situation with Clinton, however, is less clear. Evidence of the negative effects of corruption on economic prosperity is abundant: everyone knows that corruption is bad, and economic science shows that it is certainly inefficient. Support for Clinton suggests that many voters are willing to look the way when a candidate looks to encourage even greater levels of rent seeking and influence-peddling in government. This could truly be crippling to an economy, and perhaps worse than Trump’s faulty positions on trade.