Price Inflation Is Not the Worst Part of Easy Money Policy

There are many critics of the Fed’s recent money supply expansion, especially since 2008, whose chief criticism is that it will result in consumer price inflation. While proponents of the Austrian School agree that high consumer price inflation is one possible result of an expansionary monetary policy, we neither hold it as necessary nor as the worst consequence of money creation.

For the Austrian, who defines inflation as an expansion of the money supply, rising consumer prices only take place to the extent that this new money drives demand for more consumer goods. But as Mises pointed out, new money does not enter the economy neutrally; that is, it enters in specific ways and in accordance with specific mechanisms. This affects where the rising prices will show up first. And if it takes decades for the newly created money to reach consumers, then it will take decades for the consumer prices to rise.

Secondly, rising consumer prices are by no means the primary evil of monetary expansion. The primary evil of monetary expansion under our money and banking system is the harm done to the capital structure. The artificial suppression of interest rates that results from the expansion of the money supply has an eroding effect on the economy’s capital stock. When interest rates are suppressed below what they would have been without the monetary expansion, investments in unprofitable projects suddenly appear to be profitable. This is the basis for the Austrian Theory of the Business Cycle. Capital is allocated to projects that the economy cannot in actuality support and is therefore squandered.

When critics forget that A) rising consumer prices are not a necessary result (also see Murray Rothbard’s America’s Great Depression, page 85-87) or B) that consumer price increases aren’t the primary evil of monetary expansion, they don’t have much to say in response to mainstream economic narrative of our time: The Fed has quadrupled its balance sheet, so where’s the inflation? If anything, the Fed is going to need to do more to create inflation, considering we have entered a dangerous era of “lowflation.”

Before a comment is made on what happened to the inflation?, let’s remind ourselves that the Misesian understanding of the business cycle presupposes that the new money makes its way to the economy via the credit markets. That is, all else being equal, there would be no business cycle if the money was just printed by the government and handed out equally to consumers. The business cycle takes place because the new money is loaned out by banks to businesses who use this money to invest in longer processes of production. The investment with the new money into the capital structure first bids up the prices of the “factors of production.”

The point is this: prices rise in accordance with what the newly issued money is spent on. If $1 trillion Federal Reserve notes were printed to the tune of $100 quadrillion, but it was all buried and never used, no prices would rise. Thus, the lack of consumer price inflation in the economy means that the new money created (especially since 2008) is going somewhere besides consumer goods.

Now, in a completely free market with sound money that cannot be fractionally lent out or merely created digitally, general prices in the economy would tend to stay relatively stagnant over time or ticking downward as productivity increases. This doesn’t mean prices of individual goods always remain the same, it means that, mathematically, as some prices rise, others must fall. Aggregate prices can only rise over time if there is a constant increase in the supply of money.

This principle includes, of course, stock market prices. That is, if there is no monetary expansion, stock market averages would mathematically not be able to trend upwards, unless people consumed less elsewhere in order to buy stocks. Individual stocks of growing companies could go up while stocks of companies less in tune with consumer demand would fall. But the phenomenon of all stocks across most businesses going up at the same time can only take place in a regime of monetary expansion. For more, see Kel Kelly’s Mises Daily article here.

In the years since the last great inflation scare of the 1970s, we have seen the money supply expand monumentally, while the consumer prices have not gone back to 70s style increases. And indeed, as the Fed quadrupled its balance sheet in response to the financial crisis of 2008, even still: shockingly low consumer price inflation (especially compared to what many thought would happen, given the money supply expansion). But yet, while consumer price inflation rates never hit the same double digits as they did in the 70’s check out the Dow Jones: 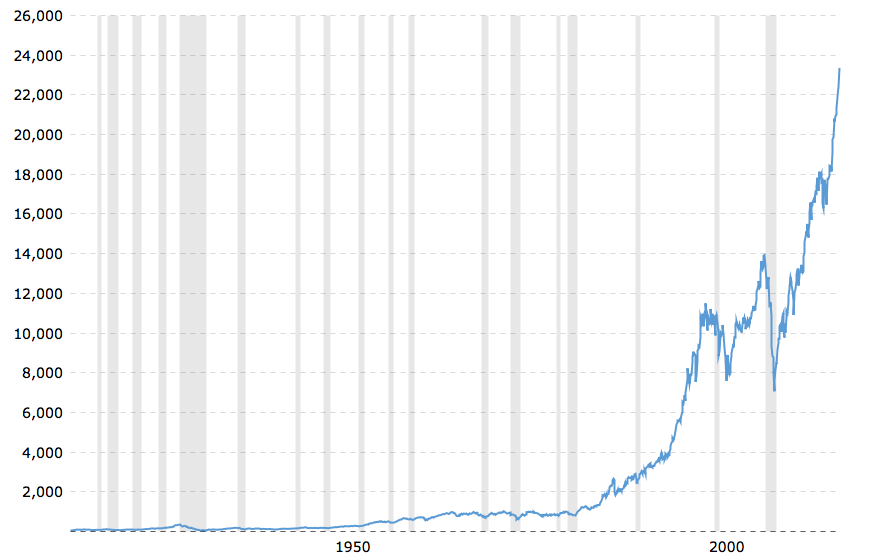 One of the reasons that the inflation has hit asset prices far more intensely than consumer prices is because of how the Central Bankers reacted to the 70’s double digit price inflation. When Nixon took the United States off the gold standard completely, the result was freedom of the central banks to greatly expand the money supply. The downside of this was that the money quickly entered the hands of the consumers and caused tremendous damage to the currency’s purchasing power. Volker, of course, responded by increasing interest rates quite substantially and killing the rising price inflation.

This created a big problem for governments. Robert Blumen describes this in a Mises Daily article several years ago:

“The conundrum facing governments at the time was how to enable governments to continue to live beyond their means, without suffering inflationary consequences. […] The mechanism of the last major bout of inflation was the sale of government debt to commercial banks. In this process, called "monetization," banks or the Fed create the money out of nothing with which to purchase the bonds.”

The problem was that the Federal Government wanted the Fed to help finance its reckless spending without actually producing price inflation. The solution to this dilemma is the cause of maniacal stock price booms since the 1990s. It is the reason why the Fed’s massive monetary expansion never resulted in consumer price inflation. The “quantitative easing” embarked on by Bernanke never resulted in extremely high consumer price inflation because the banking system no longer expands the money supply by way of commercial banks.

Instead, as Blumen writes:

the centerpiece of [the central bank solution to the dilemma] was a change in the method of financing government debt. Deficit finance bonds would be sold to private investors through existing financial markets. This would place the bonds in the hands of investment funds, rather than on the books of commercial banks as would have been the case had they returned to the old style of monetization.

[These changes] confined the price adjustments resulting from monetary expansion to the financial system. The character of the 80s and 90s inflation differed from that of the 70s. In recent decades, price changes following money quantity changes have been in stocks and bond prices, rather than wages and consumption goods prices.

But this shift does not mean the business cycle has been eradicated. It merely means that the consumer outcry against monetary expansion — a political issue that provides a check against reckless central bankers — has been temporarily silenced, all while the capital structure is eroded behind the scenes. The historically low interest rates that resulted not from savings but from money creation still do damage to the economy’s pool of real savings. A hyperinflation of a paper asset is a monetary illusion that cannot produce real wealth, real goods and services.

As Frank Shostak has said,

The printing of money therefore cannot result in more savings as suggested by mainstream economists, but rather to its redistribution. This, in the process, undermines wealth generators, thereby weakening over time the pool of real savings. So any so-called economic growth, in the framework of a loose monetary policy, can only be on account of a private sector that manages to grow the pool of real savings despite the negative effects of the loose money policy.