GET NEWS AND ARTICLES IN YOUR INBOXPrint
A
A
Home | Wire | New Job Numbers Disappoint, Labor Force Shrinks, the Fed Has No Strategy

The media today is reporting that markets are volatile today because new employment data from the BLS has come in below levels forecasted. Basically, when we play the expectations game, the employment numbers disappointed.

But if we ignore the expectations, do the numbers look good?

According to the new payroll data for September, total payrolls were up, year over year, by 1.9 percent. That’s the smallest YOY increase since May 2014. Also, the year-over-year change in payroll employment has gone down for six of the last seven months: 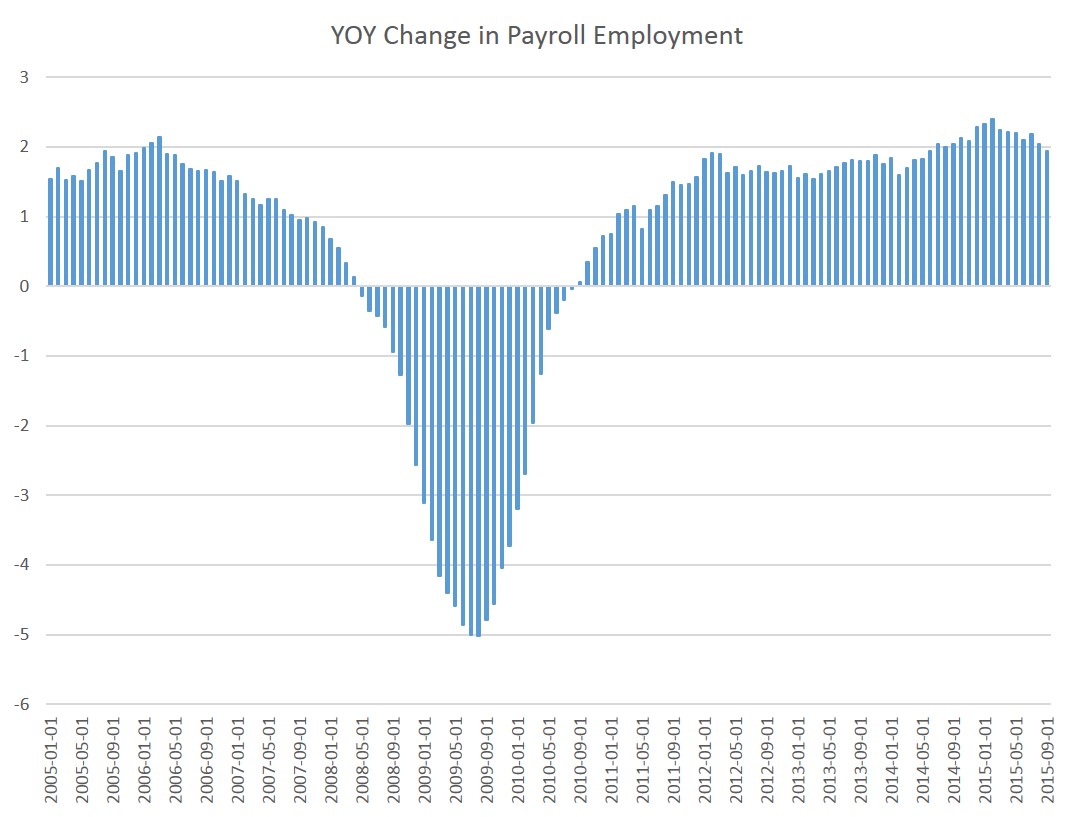 Overall, growth rates are still fairly robust (compared to the 2002-2008 expansion), but we haven’t seen this many drops in the YOY growth since 2007-2008. The trend is not robust.

This was coupled with lackluster numbers in average weekly earnings. September’s Year-over-year growth was the second-lowest rate measured this year, behind only June’s number: 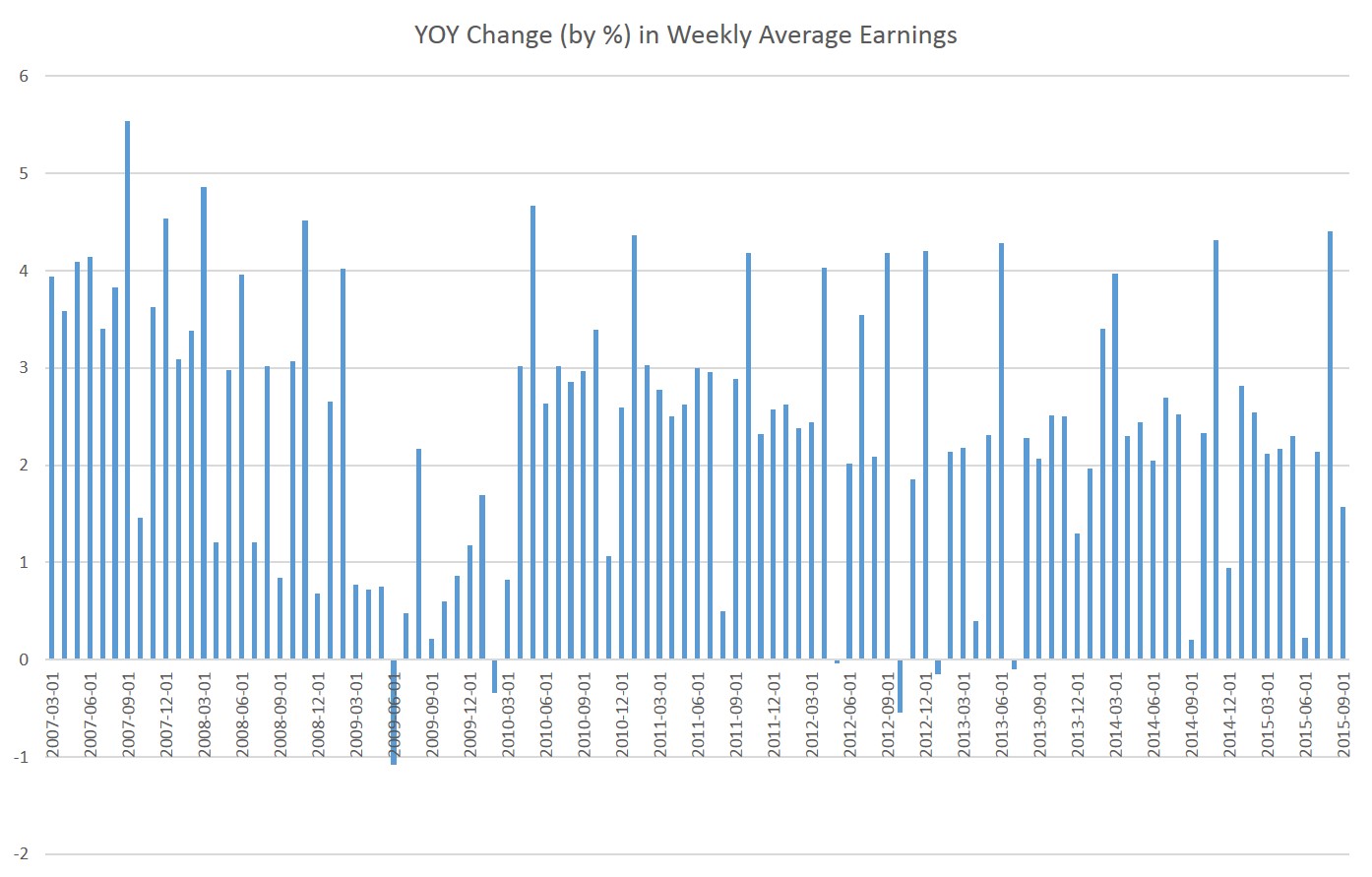 The number is not terrible, but it’s clear that the markets were expecting some signs of real growth. All they got, though, was just more of the same within an overall trend that’s drifting down.

On top of this, we find that the labor force participation rates do not point toward a particularly encouraging job market either. According to the latest data for September, the total of potential workers not in the labor force hit a new high of 94 million. With so many out of the labor force, we’d expect an increased scarcity of workers to be pushing wages up. But that doesn’t appear to be happening. 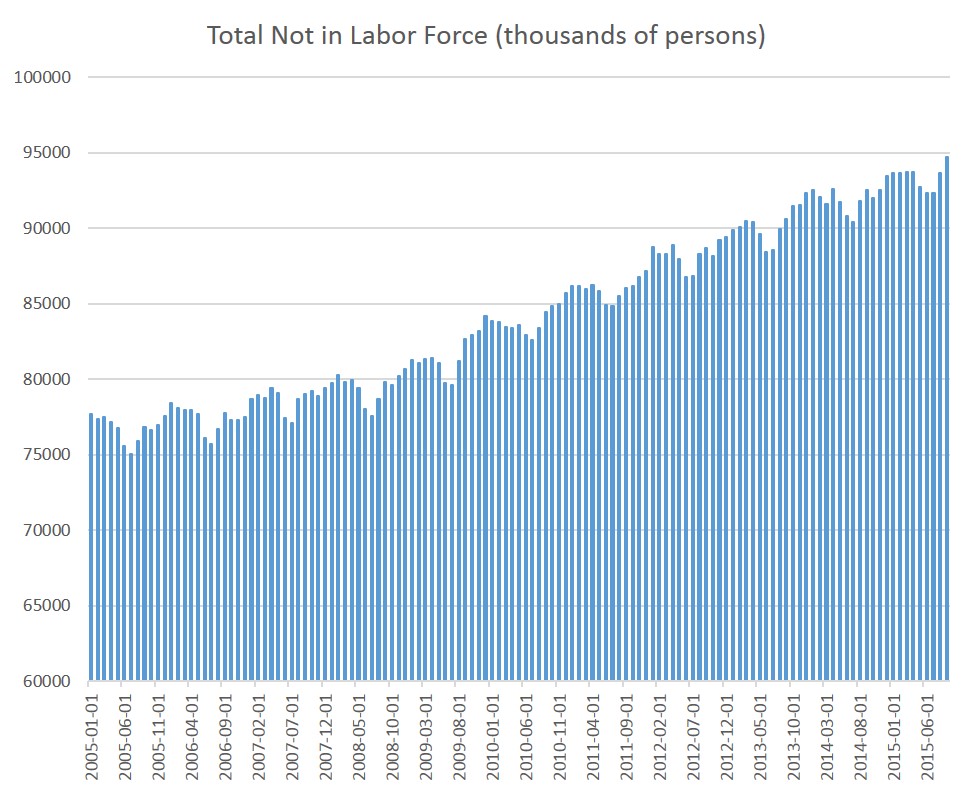 These new highs in out-of-labor-force numbers translate into a labor force participation rate of 62.4 percent. You’d have to go back to 1977 to find a comparable rate: 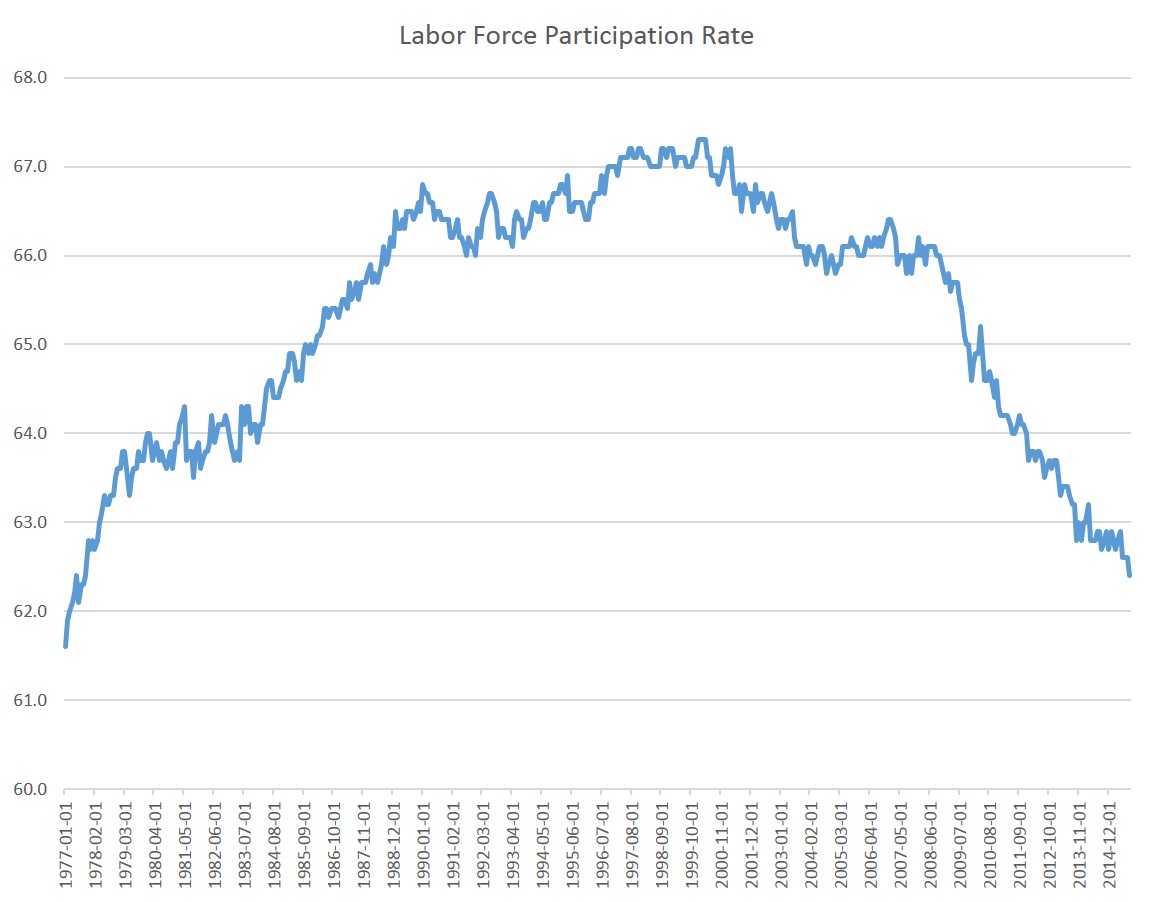 So, it’s great that the payroll survey shows a year-over-year increase of 2.7 million jobs, but that seems a bit sparse when we consider that labor force participation is so low.

Now, you might be saying to yourself “well, what if some of those people are happy with their standard of living and are out of the labor force because they'd rather have leisure than work?” That would be a good question to ask. It could be true for many, such as retirees.

But, in this case, we can’t blame the big declines on retirees. If we look at labor force participation in the over-65 crowd, we see that it’s actually gone up in recent years: 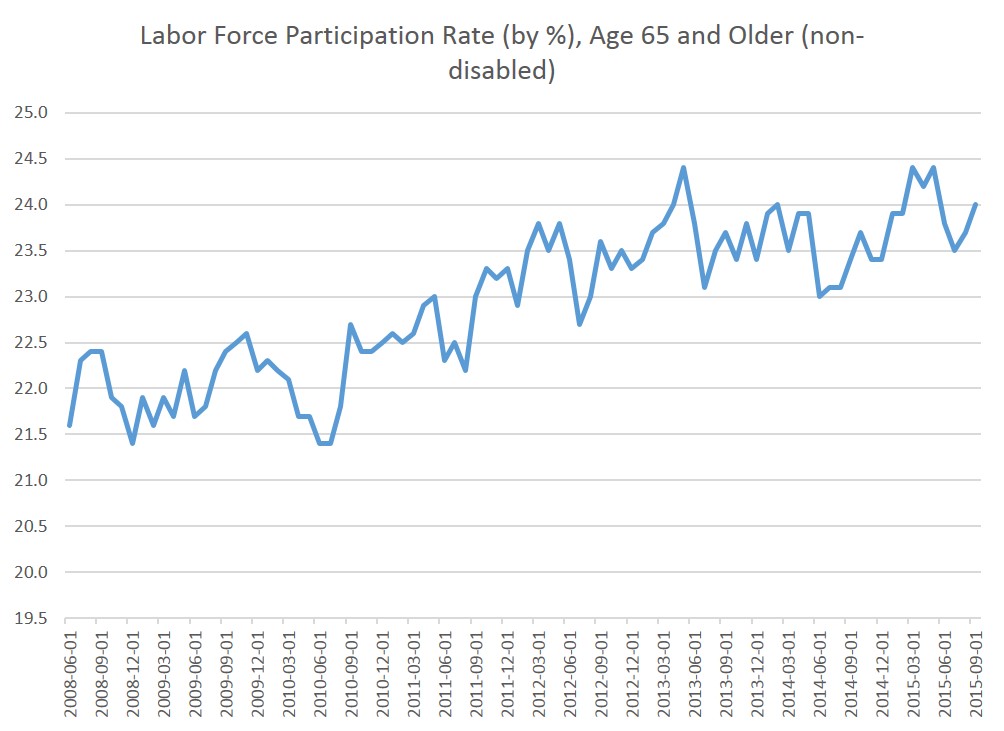 And in the over 55 crowd, the rate is stable around pre-crisis 2008 levels (although slightly declining).

The real declines, we find, come in the younger groups, including the 25-55 crowd. 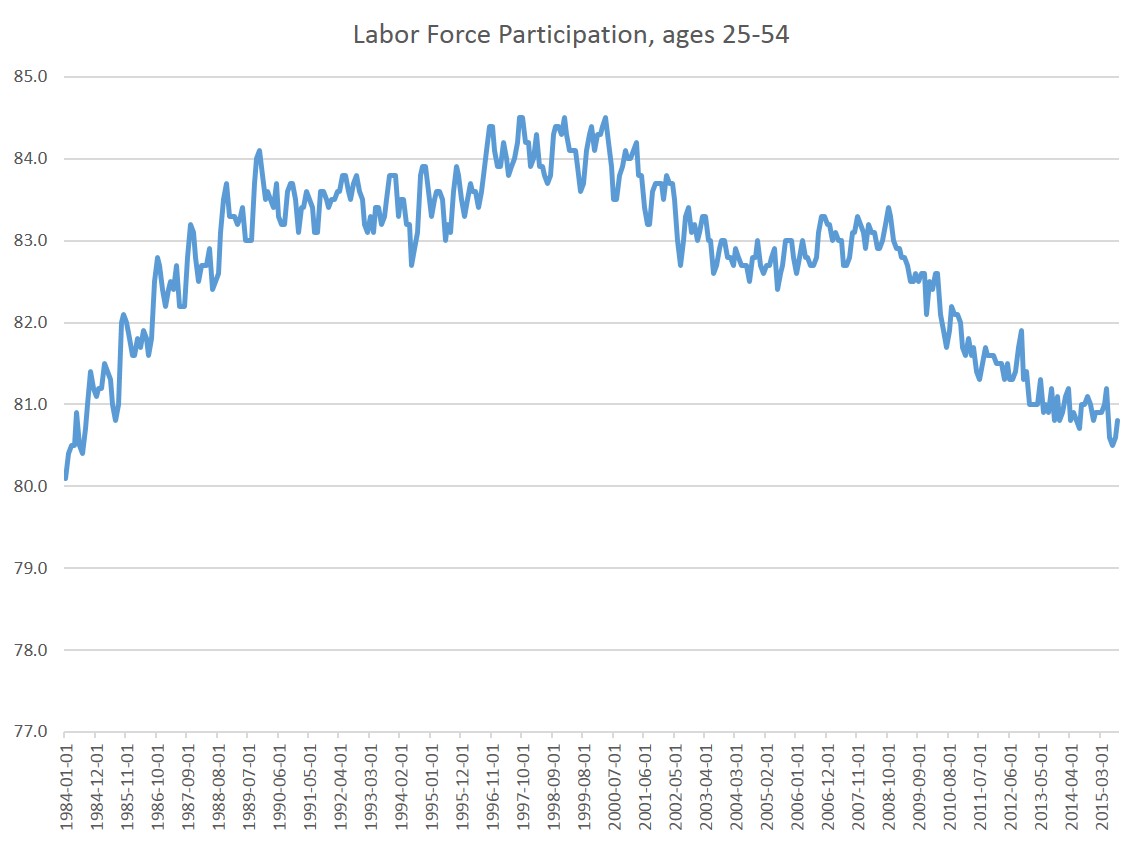 So, we’re getting declines in the labor force among the workers who are in the period of their lives that bring the greatest expenses (such as child rearing, starting businesses, buying family cars and furnishing homes). That doesn’t point to a robust economy, and it spells trouble for public pensions down the line.

The 16-19 group has even worse numbers (which are near an all-time low) for labor participation as teens experience very high unemployment and also put off work to hope (possibly vainly) for better work opportunities after obtaining a higher-ed degree.

Naturally, the markets should be getting worried. As Business Insider suggests, the Fed can't raise rates with such mediocre numbers coming out. And at the same time, central banks are already in ZIRP and negative interest rate territory. It's beginning to look like recent history is the absolute best we can hope for, and the current trend is drifting down. There's nowhere the central banks can go now.