A Nationwide Minimum Wage Is Even Worse than State-Imposed Wages

Labor activists have continued to press for a nationwide minimum wage of 15 dollars, and in a surprisingly economically-literate article at ABC news, commentators recognized that the higher a minimum wage is pushed, the more it will increase unemployment:

"It seems to me very probable that the employment losses would be quite a bit larger under a $15 federal minimum than under a $12 minimum," Burtless said. "And I am speaking as a labor economist who strongly supports the president's call for an increase in the federal minimum wage to $10.10 an hour. I can even be persuaded that a hike in the minimum wage to $12, if phased in over a long enough period, could be a good idea, depending on the condition of the economy and the rate of increase in U.S. median wages."

"If we want low-skilled people to still get or keep jobs, $12 is a stretch for many, while $15 might be impossible. Think of someone earning $10 right now," Holzer said. "They probably get hired or kept at $12 but not $15. And those earning $8 right now might be priced out the market at both wages."

In other words, if you set the minimum wage at a point where it won't affect that many workers, and you won't end up with noticeably higher unemployment rates on your hands.

Make no mistake: as a result of any increase in the minimum wage, fewer new hires of low-skilled workers will take place, and some will be laid off (ceteris paribus). But proponents believe that the workers who are priced out of a job are just the price "we" pay for raising the wage of those lucky enough to keep their jobs. As is common for interventionists, the predominant justification for overlooking the downside  is that "one can't make an omelette without breaking some eggs." The eggs to be broken here are the least skilled workers whose productivity falls below the minimum wage.

But even honest interventionists admit that, at $12 per hour some people will simply be unlucky and lose their jobs. At $15 per hour, as Holzer notes, an even larger number will lose their jobs.

This fact is hard to deny, and it's why no one advocates for an increase in the minimum wage to $50 dollars per hour. Virtually everyone instinctively knows that no one will hire low-skilled workers at that wage. Nevertheless, there remains an idea that the downside can be minimized by raising the minimum wage incrementally.

That's just wishful thinking, but it is true that raising the minimum wage incrementally is better than raising it $10 or $20 all at once. That would throw the labor markets into complete disarray.

Another less-bad way of dealing with minimum wage increases is to make sure that they are done only at the local level. A nationwide minimum wage is one of the more damaging ways of implementing a minimum wage.

At the center of this problem is the fact that wages are not uniform across the country, so increasing a national minimum wage to $12 would mean an area with relatively low money wages would have to push wages up higher to meet a new minimum wage — as compared to an area with money wages already close to $12. Thus, the resulting unemployment wold be higher in those low wage areas and in other areas.

To illustrate this, let's use "food preparation workers" as classified by the Bureau of Labor Statistics. These workers are often used by the media as "typical" minimum wage workers. We can use the BLS's numbers to get an idea of what hourly median wages are for low-skilled workers from state to state.  Keep in mind that the median wage is calculated only using people lucky enough to be employed above the minimum rate. A worker who is qualified to earn $7 per hour is forced to earn a wage of $0: 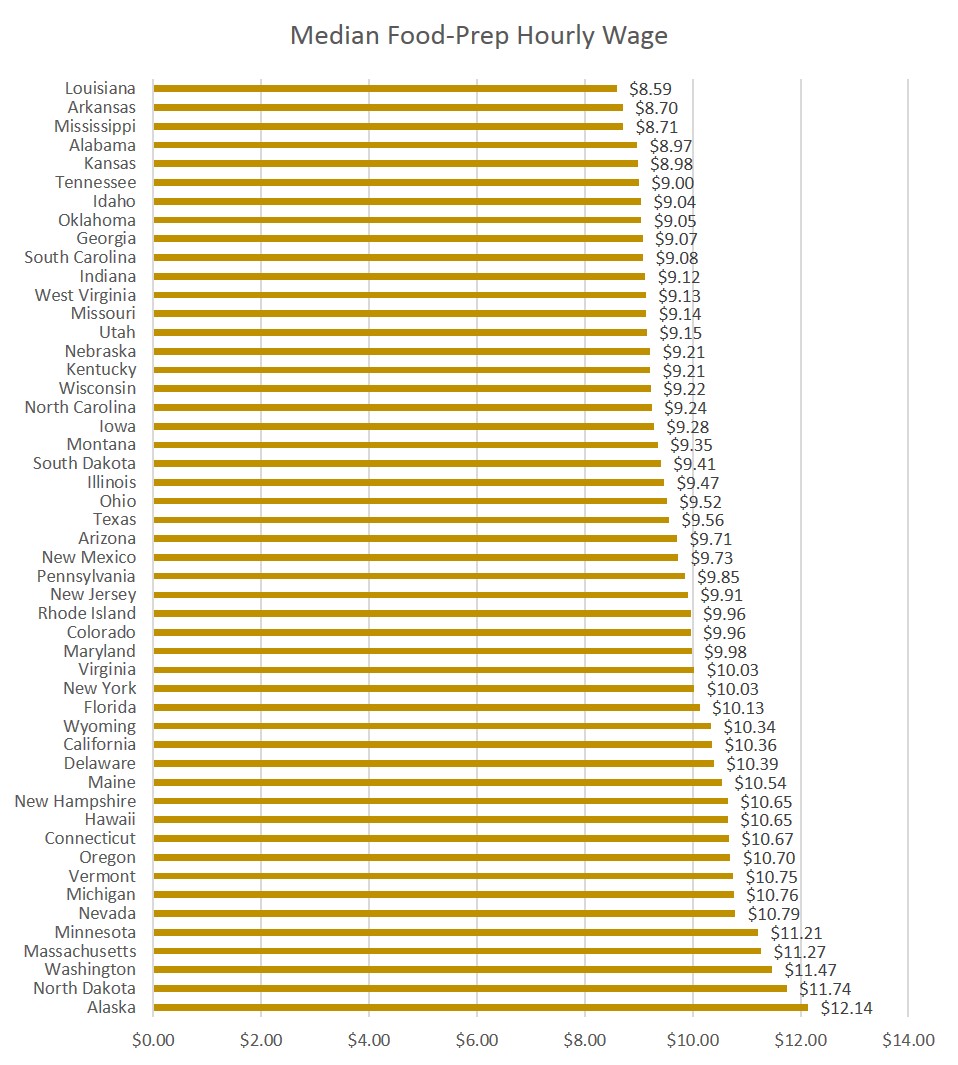 Naturally, every state has a median wage above the national minimum wage of $7.25. (It's required by law.)

On the other hand, every single state has a food-prep median wage well below $15 per hour. Thus, raising wages in any of these states to $15 will be problematic and price people out of job. However, the median wage for food-prep workers varies by as much as three dollars from state to state. As one might expect, places that tend to have a higher cost of living and/or a relative shortage of workers (e.g., Alaska and North Dakota) have higher wages. Areas with a low cost of living, such as Alabama and Kansas, have lower wages.

In Kansas, for example, if the minimum wage were raised to, say, $8.25, we would indeed see some marginal workers lose their jobs, and low-skilled workers would not be hired, when they might have been hired at $7.25. However, the numbers in this case may not be enough to cause a large enough change in the unemployment rate to be noticed by the media, or made into political hay by politicians. Given the current median wage, it's clear that many employers would continue to value many food prep workers at a rate above the minimum wage, even if it were increased.

An Increase to $15 Would Be Huge in Some States

In some states, though, the effect of a national minimum wage of $15 could be devastating. In Louisiana, for example, a median wage earner in food prep would have to see his wage increase 75% just to stay legal. In Alabama, the increase would be 67%. Of course, few wage earners would be likely to actually see wages increase 60 or 70 percent. Many would instead likely see their wages go to zero by being laid off. Obviously, few businesses — especially small and medium-sized ones —could afford to raise wages 60 or 70 percent and still keep all their employees. Or, as would likely be the case, many employers would simply go out of business and lay off 100% of their work force.

Here's how much the median food-prep wage in each state would have to be increased to meet a mandated $15 wage (for food-prep workers): 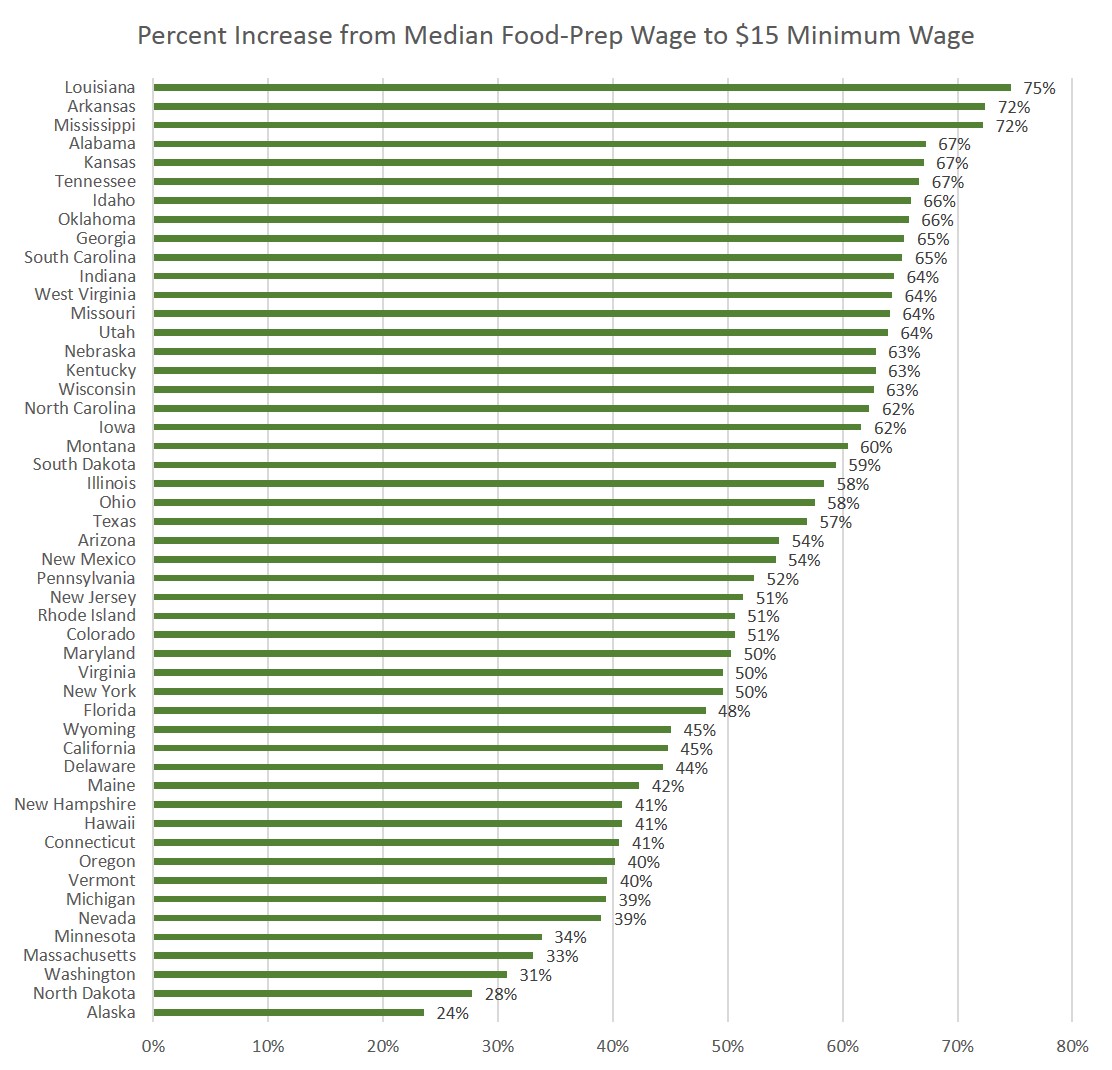 In Some States, Median Wages Are Barely Above Minimum Wages

Let's look at it another way. Things are actually worse in some states than is implied in the graph above. Some states already have median wages barely above their set minimum wages, meaning that any additional increases in those states would be even more problematic that we might initially think.

The next graph shows us how far above the food-prep median wage is above the set statewide minimum wage. Some states have their own, higher minimum wage rates. states without their own minimum wage simply defer to the national rate: 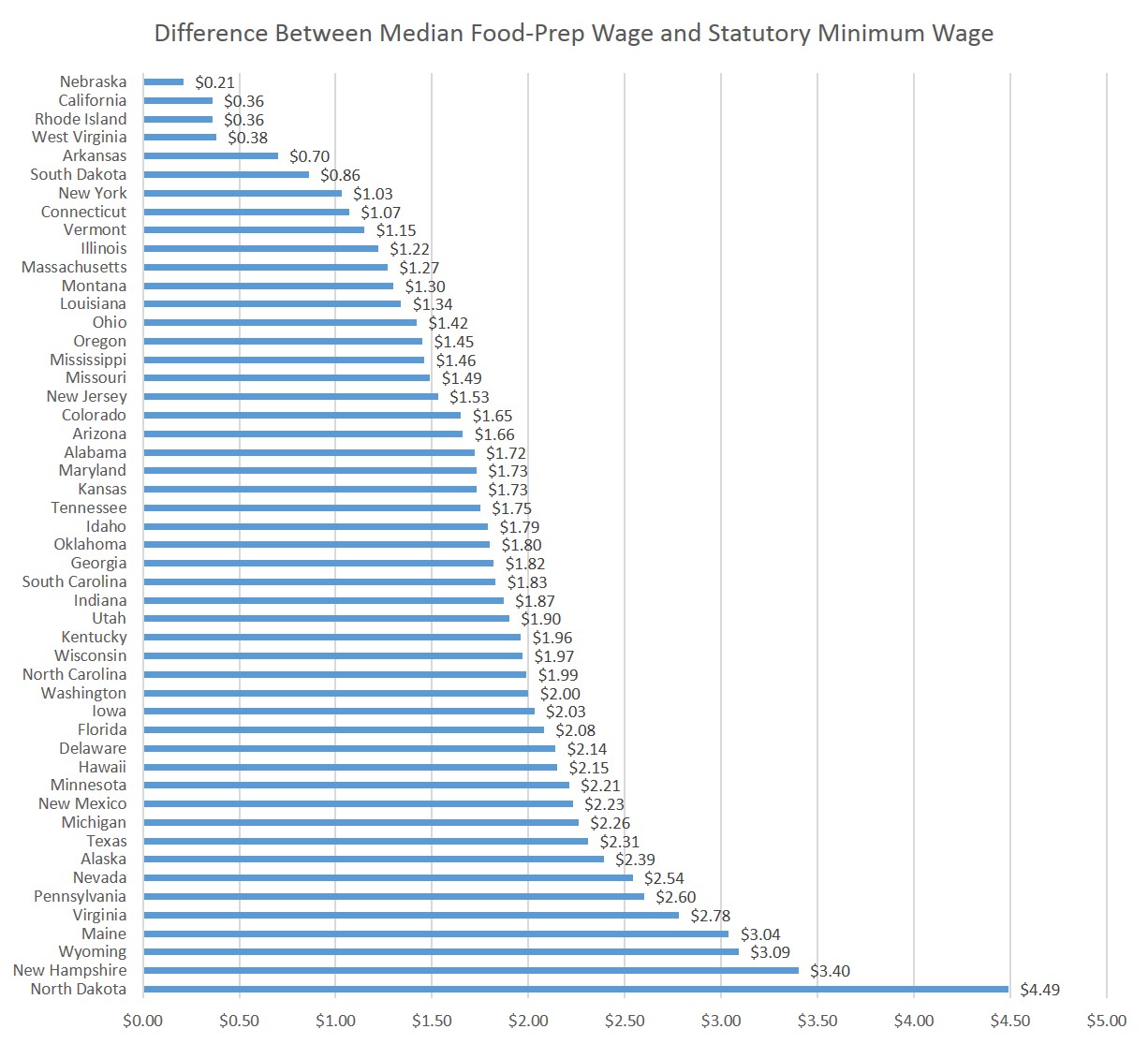 This graph gives us a sense of which states could increase their minimum wages with the least amount of disruption to the existing labor market. The states with "room to grow" their minimum wages — so to speak — include Nevada, where the median wage for food prep is more than $2.50 above the state's minimum wage of $8.25. In North Dakota, where there has been an oil boom and labor shortage in recent years, the median wage for food prep is nearly $4.50 above the minimum wage. In other words, you could increase the minimum wage in North Dakota a dollar or two and most North Dakotans would keep their jobs.

Some other states, though, have already set their minimum wage so high that food prep workers have a median wage very close to the mandated minimum wage.

Nebraska, for example, has a surprisingly high minimum wage for a state with such a low cost of living. There, the median wage for food prep workers is a mere 21 cents above the minimum wage. That means if you work in food prep in Nebraska, you probably aren't making much more than the minimum wage, even if you have experience. It also means that most workers who could have earned a wage that was a dollar below the median wage is instead rendered unemployed by the price floor.

In Nebraska, increasing the minimum wage even 25 cents would place the median wage below the minimum wage. That means fully half the work force in that field would then potentially be priced out of a job.

Food-prep wages in these states are already so close to minimum wages that a significant number of workers in the food prep field are unlikely to survive a minimum wage hike much beyond where they are now.

The more intelligent politicians behind the planned minimum wage increase there know this, which is why they've chosen to phase in the increases over time. This phase-in will also allow for price inflation to force up median wages, thus diminishing the effects of the increase in the mandated wage. The politicians, though, will receive credit for their "compassion" in raising the price floor.

It's understandable, though, why New Yorkers and Californians would want a raise. Those two states are among the worst places to be a low-skilled workers, once the cost of living is factored in. Even if one is a low-skilled California worker who's lucky enough to have a job at the mandated minimum wage of $10, that's still one of the lowest wages in the country in real terms.

The third graph shows the median food-prep wage in each state when adjusted to "regional price parity" as provided by the BLS: 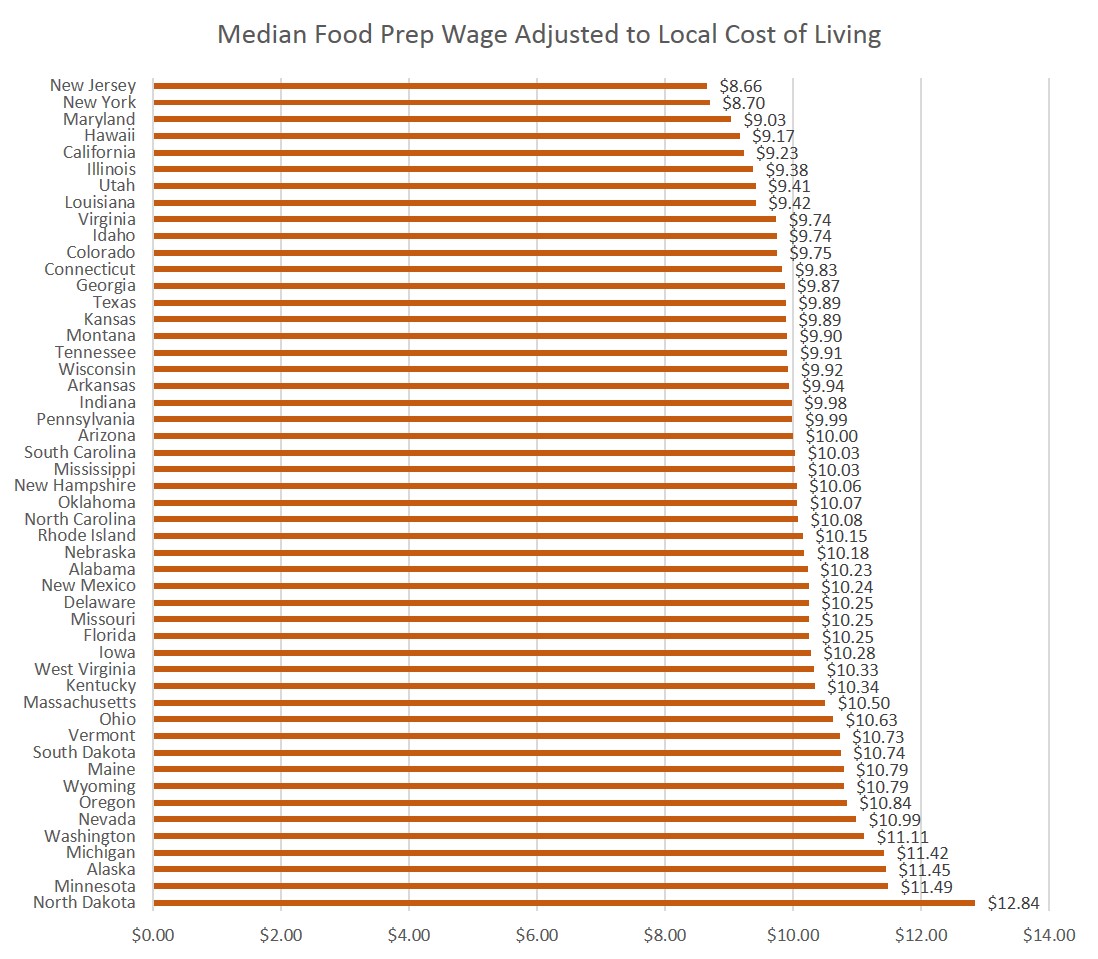 [RELATED: "California and New York Are Poorer Than You Think"]

Theoretically, a low-wage worker in New York could give himself a quick raise simply by moving to New England or the Midwest. Of course, many New Yorkers for some mysterious reason think New York is a wonderful place and refuse to leave. This is a choice they make, and their demonstrated preference is to remain in New York and receive a lower wage.

The lesson to be learned here is that, while minimum wage laws are bad, uniform minimum wage laws imposed across dozens of diverse economies are much, much worse. Naturally, imposing minimum wages at the statewide level leads to the same problem, but on a slightly smaller scale.

If politicians wanted to increase real wages, they'd instead focus on lowering the cost of living and increasing worker productivity.