GET NEWS AND ARTICLES IN YOUR INBOXPrint
A
A
Home | Wire | Las Vegas: An Austrian View of Land Prices

Tags The EntrepreneurValue and Exchange

In Chapter 9 of Man, Economy and State, Murray Rothbard takes on the valuation of land. Robert Murphy discussed Rothbard’s analysis in a 2011 piece for mises.org, writing that he had covered this chapter in a Mises Academy class, and that the discussion of land prices “is an illuminating topic because it involves capitalization and entrepreneurship, two areas where Austrians have made seminal contributions to economic theory.”

Indeed, while it’s been said “you can’t get hurt in the dirt” and the likes of Will Rogers and Mark Twain preached, “Buy land, they’re not making it anymore.” With capital or higher order goods, price and timing (or as Austrians would say, entrepreneurial foresight and capitalization) are everything.

Recently, Australian billionaire James Packer listed 34.6 acres on the Las Vegas Strip for sale. The land parcel lies just north of the Fashion Show Mall and across Las Vegas Boulevard from the Wynn. His asking price is $400 million.

“This is one of the most exciting properties to become available in Las Vegas in a long time,” listing broker John Knott, head of CBRE’s global gaming group, said in a press release. 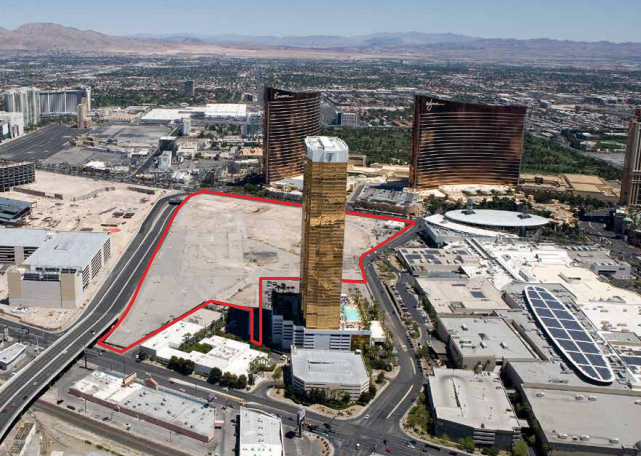 That project was proposed by the Israeli Alon Group when that company paid $1.2 billion for the property at the top of the boom in 2007. Their plan to build a casino-resort modeled after New York’s Plaza Hotel was stopped cold by the financial crash which put a kibosh on the funding of major casino projects.

What’s also interesting about the site is only 18.4 acres of the site are owned fee simple as real estate nomenclature calls it. The other 16.2 acres are leased from the Elardi family, who through thick and thin collect their considerable rent payments.

Murphy quotes Rothbard, “Future rents of durable goods tend to be capitalized and embodied in their capital value and therefore in the money presently needed to acquire them. As a result, the investors and producers of these goods tend to earn simply an interest return on their investment.”

Murphy uses the example of sharecroppers leasing land and so on, using tiny amounts to illustrate. But, of course, as he writes, “Once we understand the basic process, it’s easy to see how changes in the underlying fundamentals will influence land prices.”

This particular, highly desirable, parcel of land, fell 77 percent in value and now is on the market for 43 percent more than what was paid for it in a liquidation. No improvements have been made. In fact the casino that occupied the property — The New Frontier — was torn down after the property was purchased for $1.2 billion, the highest amount ever paid for casino land.

In 2007 when Alon made its purchase, the Las Vegas economy was not only robust, but it was believed that there was much more to come, despite the Federal Reserve having increased the Fed Funds rate sharply since 2004.

Las Vegas Sands had just opened the 50-floor, 3,025 room Palazzo Hotel next to the Venetian. McCarran International Airport had a $4 billion expansion underway that would eventually become another terminal. Wynn Resorts had its Encore property under construction, MGM’s CityCenter was the largest construction project in the world, the Fontainebleau was under construction, and Boyd Gaming had torn down the Stardust Hotel and Casino with plans for a huge new hotel property.

Making a huge investment, tearing down an old property, and starting fresh with vacant land didn’t seem like such a crazy idea in 2007, but of course it turned out to be just a part of what Rothbard described as a “massive cluster of errors.” The CityCenter project almost bankrupted MGM and one of its towers was torn down. The Fontainebleau was never finished and sold for pennies on the dollar at a bankruptcy auction. Boyd Gaming stopped construction after erecting the steel for its structure and remains as a huge skeleton, under different ownership, to this day. The airport’s new terminal seems empty most of the time.

An adequate theory of depressions, then, must account for the tendency of the economy to move through successive booms and busts, showing no sign of settling into any sort of smoothly moving, or quietly progressive, approximation of an equilibrium situation. In particular, a theory of depression must account for the mammoth cluster of errors which appears swiftly and suddenly at a moment of economic crisis, and lingers through the depression period until recovery.

In 2014 when James Packer’s group purchased the Alon site in foreclosure the Las Vegas economy was on the mend and the Federal Reserve’s zero interest rate policy was in full swing. Key staff were hired and the start of construction was considered imminent. Gross gaming revenue in Las Vegas was over $9.5 billion in 2014, while visitor volume was over 44 million.

However, Packer could not secure the financing to start the project despite his personal wealth. Until early this year, the project was a go if financing could be secured. “There is no question that the environment is difficult for everyone at the moment, but deals are still getting done,” Andrew Pascal (Packer’s CEO) told the Las Vegas Review Journal. “We will continue to advance our development and ultimately secure the capital we need.”

So while the entrepreneur has the vision, he or she must convince financiers of their projections for cash flows extending far into the future. The project’s debt, equity and profit total its present value. As Rothbard explains,

The capital value of ground land, as we have seen, sums up the discounted total of all future rents, and these rental sums may exert a tangible influence from a considerable distance in the future, depending on the rate of interest. There is therefore no mystery in the fact of a capital value for an idle site, or in its rise. The site is not being villainously withheld from production.

Now, Packer’s ability to sell the property will depend on another entrepreneur being able to secure financing to build a project that will produce, as Rothbard refers to it, “future rents.” The central bank's continued artificially low interest rates make investments appear more profitable than they really are, and this is especially so for investments with long-term horizons, i.e., in Austrian terms, there is an artificial lengthening of the investment horizon.

If Packer had obtained financing and opened in 2018 as he projected, his timing might have been good. Rosemary Vassiliadis, director of Clark County’s aviation department believes McCarran airport will have more traffic this year eclipsing its record of 47.8 million airline passengers, set in 2007. However, gross gaming win for the first quarter of this year was $100 million less than the first quarter of 2007.

Las Vegas is attracting plenty of tourists, but they aren’t gambling as much as they used to. Chris Kirkham writes for the Wall Street Journal, “For casinos on the Las Vegas Strip, the share of revenue from gambling has been in decline for years, falling to about a third of the total in 2016, from 56% 20 years ago, as operators have pulled in more from hotel rooms, entertainment and food and beverage sales.”

The average hold percentage for blackjack is 12 percent and for craps it’s more than 13 percent. On the Strip slot machines hold more than 7 percent. A customer’s stomach dictates how much he or she can drink or eat. Meanwhile a tourist can gamble all day and all night until their money or credit runs out. Bar and restaurant profit margins are razor thin.

However, as Austrians understand, it’s not what a project might earn now, but in the future. “What distinguishes the successful entrepreneur and promoter from other people is precisely the fact that he does not let himself be guided by what was and is, but arranges his affairs on the ground of his opinion about the future. He sees the past and the present as other people do; but he judges the future in a different way,” explained Ludwig von Mises.

The Fed is raising rates and making noises about shrinking its balance sheet. Ryan McMaken pointed out last month that the Fed is already tightening. Using “Austrian” money supply figures, he wrote,

Las Vegas based economist John Restrepo noted there’s “always a market for something at the right price,” but he’s not convinced someone will pay the Alon site’s asking price.

With higher rates and less gambling,“soon enough” might be a long way off, or the land’s price may come way down.

The Federal Reserve is raising interest rates and we know what follows, given there has been more than a decade of...