It May Be a Long Way Down

Today's discomfiting 1,000 point drop in the DJIA may be the next in a series of shocks for worldwide equity markets. But given the growth in the Federal Reserve Bank's monetary base, US stocks may have a long way down left to go.

Consider that base money has more than quadrupled since the Crash of 08.

Not surprisingly, excess reserves of Fed member banks have skyrocketed from effectively zero to over $2 trillion in the same period. 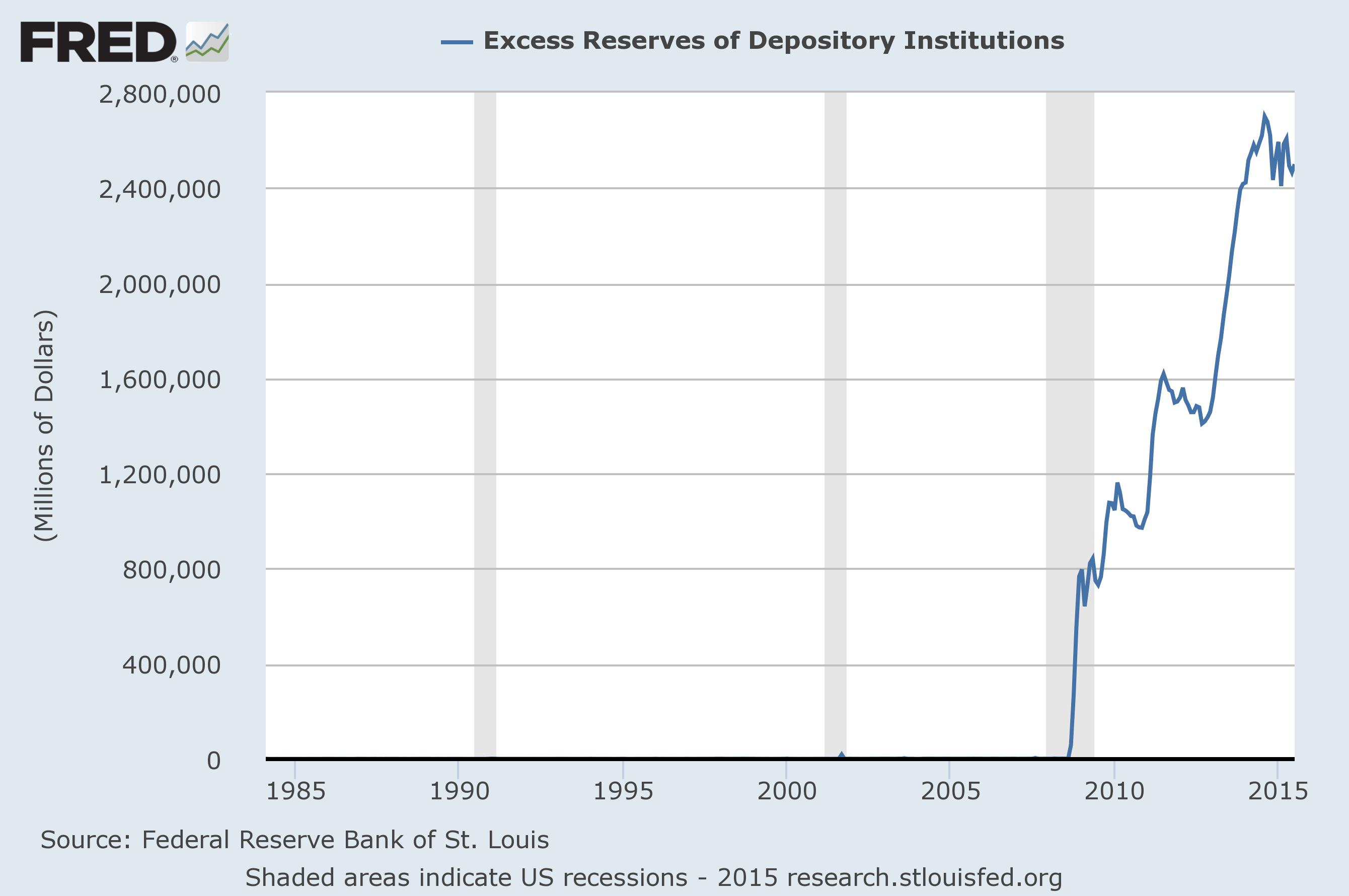 Of course Krugman et al. want us to believe that expansion of the monetary base doesn't cause price inflation, especially (as Austrians argue) in a non-uniform manner across asset classes (i.e. QE has flowed disproportionately into equities). Pay no attention to bank reserves, they say, it's all just a mechanism to keep that pesky Fed Funds Rate at or near zero.

But will the same demand-side economists deny blame for the enormous deflationary correction (i.e. the Bust) that has to occur in the wake of central bank buying sprees?

Raul Meijer, writing in the Market Oracle, sums up the predicament:

Plenty amongst you will be talking about economic cycles, and opportunities, and debate how to ‘play’ the crash, but all this is useless if and when a market doesn’t function. And just about all markets in the richer part of the world stopped functioning when central banks started buying assets. That’s when you stopped being investors. And when market strategies stopped making sense.

Central banks will come up with more, much more, ‘stimulus’, but what China teaches us today is that we’re woefully close to the moment when central banks will lose the faith and trust of everyone. After injecting tens of billions of dollars in markets, which thereby ceased to function, the global economy is in a bigger mess then it was prior to QE.

The whole thing is one big bubble now, and we know what invariably happens to those. More QE is not an answer. And there is no other answer left either. Those tens of trillions will need to vanish from the global economy before any market can be returned to a functioning one, and by that time of course asset prices will be fraction of what they are now. It may not happen today, but that doesn’t matter: what’s important to know is that it WILL happen. And if you keep being out there trying to outsmart a non-functioning market, you’ll get burned as badly as the millions of Chinese grandmas who already lost 20%+ so far just this month.

If the US gets out of this with only a 20% correction across all asset classes we should be thanking our lucky stars.

The Chinese Communist Party Is Creating a Crackdown Economy

China has created a crackdown cycle that is hurting the entrepreneurial spirit.