Earlier this week, Charles Hugh Smith suggested that the federal government abandon its use of survey-based employment data and instead simply use IRS data on incomes and tax filings to estimate trends in employment and income.

As Smith notes, the IRS data gives us a good idea of how many people are earning income. The fact that reporting income to the IRS is mandatory suggests it may be more reliable than the telephone survey data used for the Household Survey of employment.

Indeed, looking through this data, we can easily see how many filers reported income.1 ("Filers" can include joint filings from married couples.) Because the US forces even non-US residents to pay on income, not all filers are US residents. Nevertheless, the vast majority of filers are residents, and this gives us an idea of how many Americans have jobs and how many are paid wages and salaries. Other income is included as well, such as dividends, capital gains, and all those other sources of income you're supposed to report on your returns. The data includes more than just taxable income. We can use it to attempt to recreate a measure of total income overall.

The total number of filers (including all income sources) looks like this: 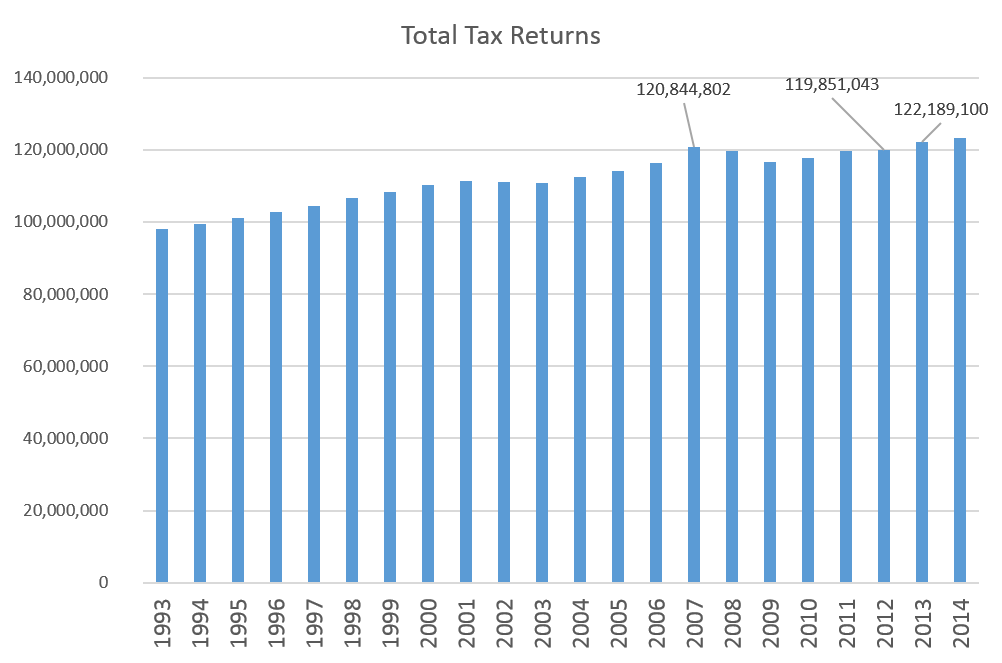 As Smith suggested, this gives us an idea of how many people were earning some income. Of course, 35 million to 50 million of those people were reporting gross adjusted incomes at levels under $20,000. So, certainly not all of them were full-timers or "breadwinners."

Moreover, when we look at the total number of filers combined with total aggregate income reported, we can estimate the average amount of income among filers overall.

Thus, in this case, we take the total amount of wages and salaries reported, and divide that by the total number of filers: 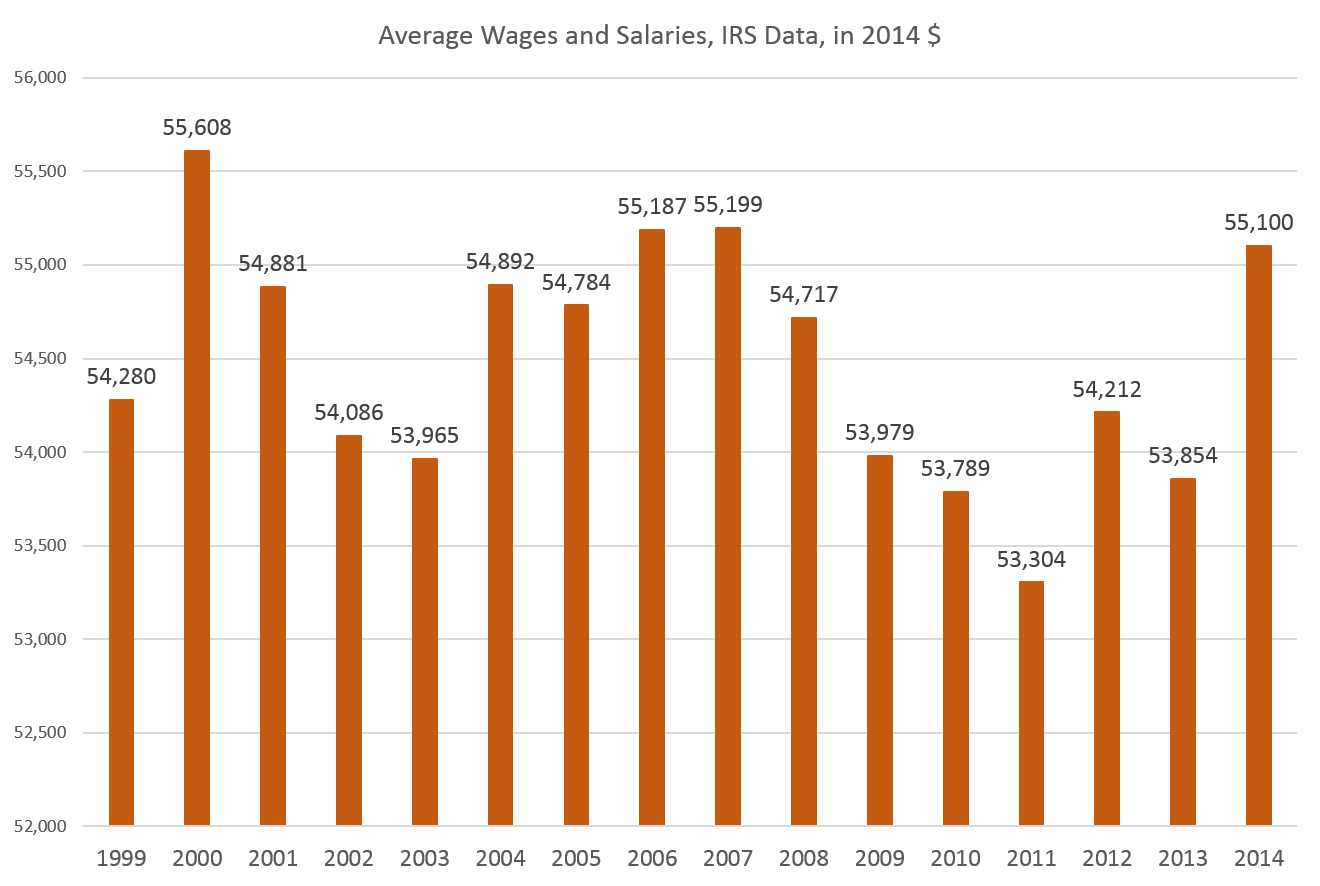 At this point, some are likely to point out that average income numbers aren't as good as median income numbers because averages can be skewed upward by a small number of multi-billionaires. That's true enough. We don't have enough information to calculate a median, but the IRS data allows us to remove those making more than a million dollars in wages from our analysis. But, it doesn't change the overall trend.3

In either case, the average income has moved only sideways since the year 2000.

Of course, wages and salaries aren't the only form of income. Fortunately, the IRS data also allows us to add in other types of income such as interest income, dividends, capital gains distributions, pension income and IRA income. When we add several of those measures in, though, we find more or less the same trend. It's true that total incomes are higher than when we include only wages. But again we're moving only sideways4: 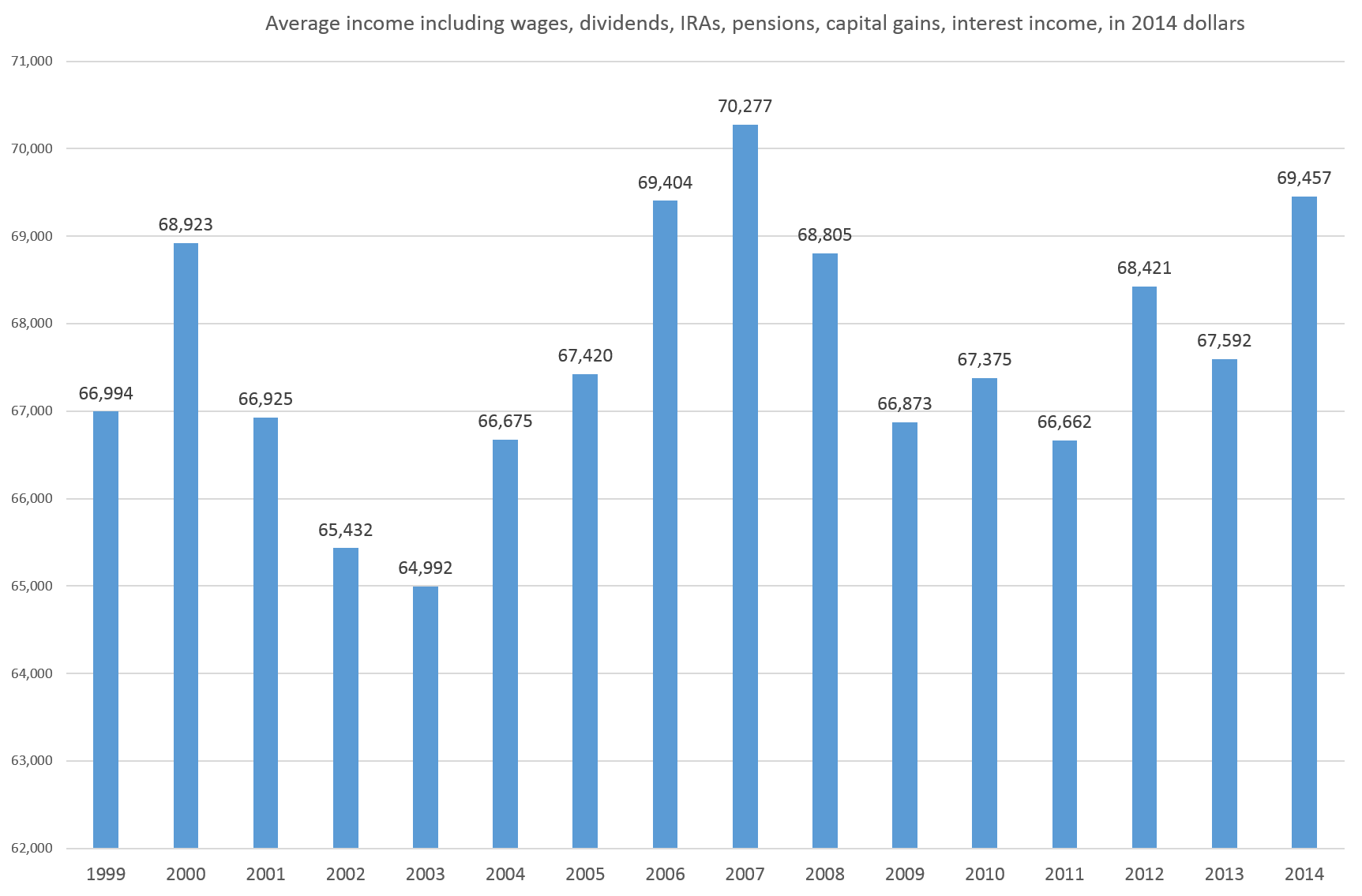 This income data somewhat mirrors earlier analysis on median household and individual income. In those analyses, we found income to be below both 2007 and about equal with 2000 levels.

Moreover, a recent report from the Harvard Business School repeatedly makes the point that real income and wealth growth in the United States peaked in the 1990s and has been declining since.

If we want to make another comparison to the official employment data, we can also analyze the number of filers who report wages and salaries, and then compare that to growth in the working age population.

The OECD releases annual numbers on growth for the population between 16 and 65 years of age. We find, of course, that there is a gap between the total number of people who file returns, and the total number of people in the working-age population. That gap, however, has been growing over the last twenty years from 65 million to around 80 million. 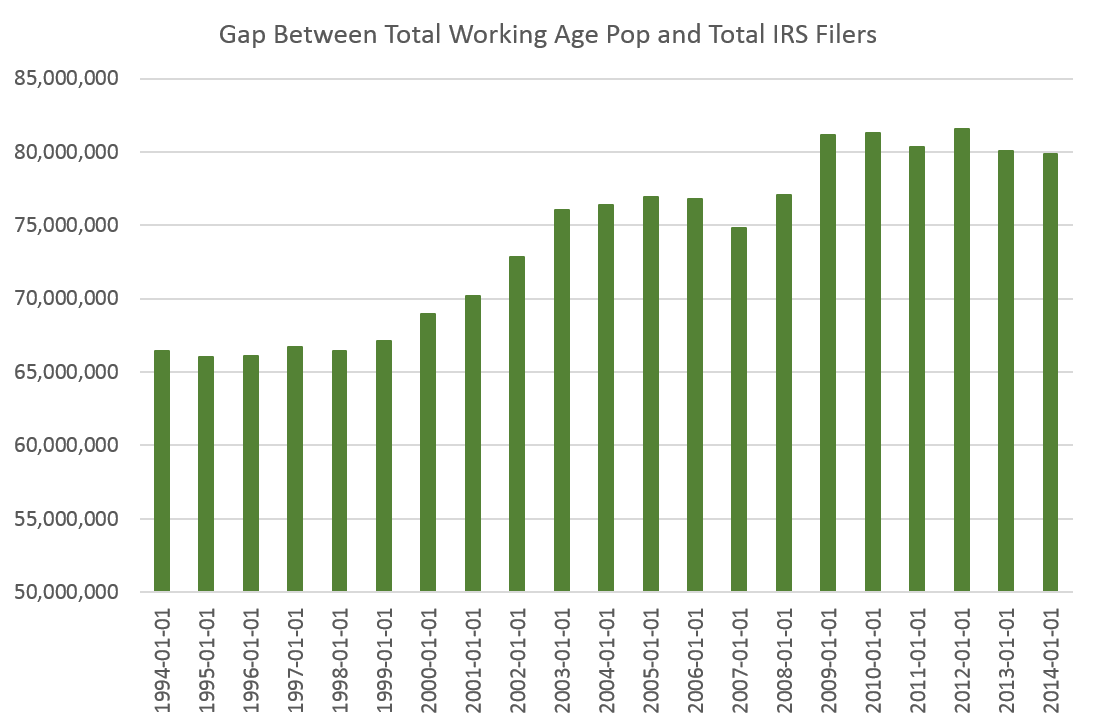 One can naturally argue that more people are staying out of the labor force because they don't need to work. That's surely true for some people, but the income data doesn't point toward a general trend in rising levels of disposable income.

Nor does it appear plausible to argue that there are fewer filers because more people are getting married and submitting joint returns. The marriage rate is now at a historic low.

Indeed, what we see in this data lends some credence to the official data showing more than 90 million residents "not in labor force."