GET NEWS AND ARTICLES IN YOUR INBOXPrint
A
A
Home | Wire | How Long Will Cheap Debt Bail Out Automakers?

How Long Will Cheap Debt Bail Out Automakers?

This week, the Commerce Department reported that consumer spending was heading upward, thanks in part to the strongest sales in six months for automobiles.

For the automobile industry, that's reassuring, but the larger trend points to a period of stagnation.

In recent years, there's been much speculation over whether or not Americans have gotten over their love affair with automobiles. We are often told that younger consumers (i.e., Millennials) don't like cars, and will all move to Manhattan and take the subway, or ride Uber cars everywhere else they want to go.

It's unclear whether or not we can blame auto sales declines on Millennial hipsterism, however. After all, with Baby Boomers moving into their 70s, more Americans are facing declining wage-based income and they're facing a need for more retirement planning. Fewer of them are running out and buying an "extra" car for weekend use.

At the same time, Millennials are postponing marriage and family later, which means they have less need of more expensive family-sized cars. When you're childless and living in the city, it's fairly easy to get by without a car. Taking the bus, or walking a mile to run errands isn't a big deal. On the other hand, when you have a couple of toddlers in tow, walking to the grocery store in the rain seems a lot less do-able. So, even Millennials who want cars — which is still a lot of them — don't yet require automobiles the way that people with families need them.

Incomes are an issue as well. There is evidence that median incomes have been largely stagnant since 2001, surpassing former pre-crisis peaks only in the last two or three years. This suggests that many Americans simply have less money to spend on automobiles. 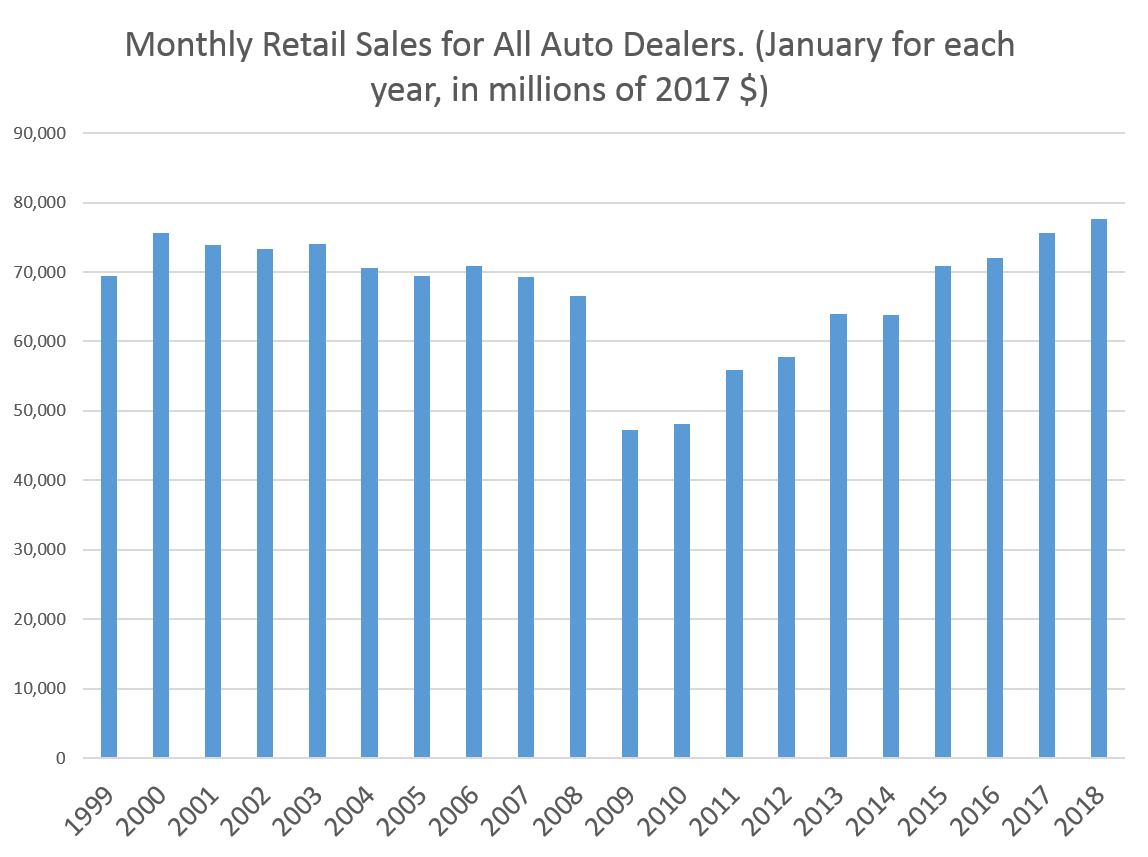 Looking (above) at the Commerce Department's totals on auto sales for all auto dealers (including both new and used cars), we find that total sales reached $77.6 billion in January of 2018. Compared to all other January totals, that's a new all-time high — even higher than the old peak of $57 billion reached in 2007.

But, if we adjust for inflation using the official CPI, we find that total auto sales have only this year surpassed the old January 2000 peak of 75.6 billion dollars reached 19 years ago.

From the perspective of the automobile industry, that's not exactly a reason to throw a party. Moreover, if we take these same numbers and adjust them for population growth, we find that spending on autos per capita is still down from where it was in 2000. 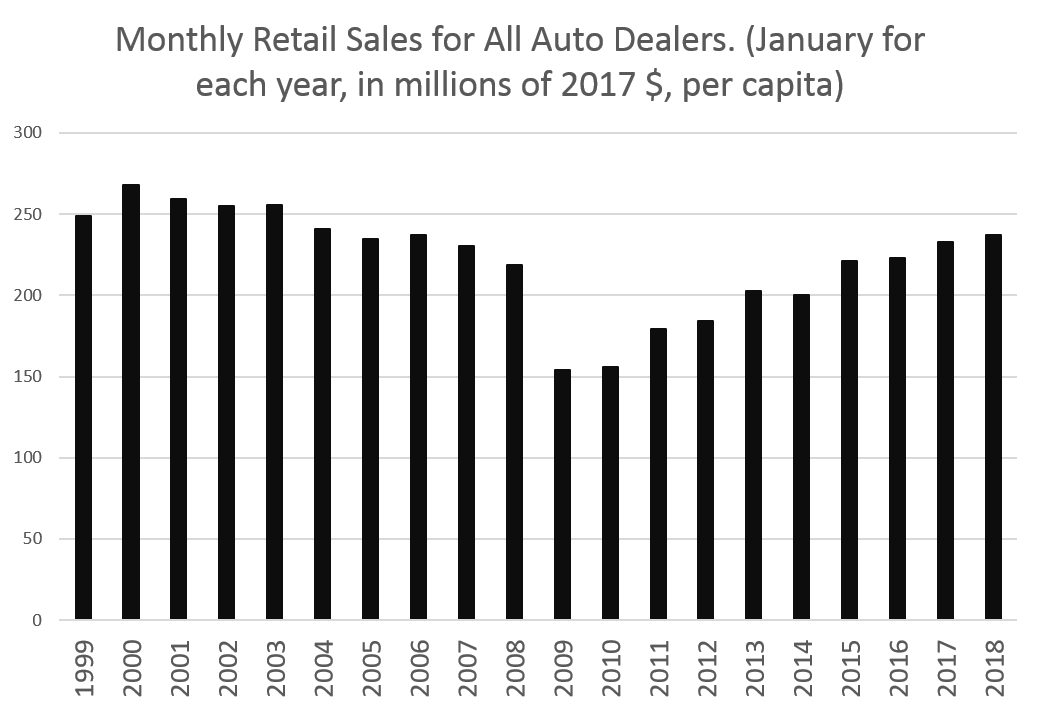 Easy Money to the Rescue

Fortunately for auto makers, lenders can still offer them cheap money to entice potential buyers with cheap financing — and auto dealers have been using cheap loans to juice auto sales for years. Gabrielle Coppola at Bloomberg this month noted, though, that the era of 0% auto loans may be coming to an end — at least for now. 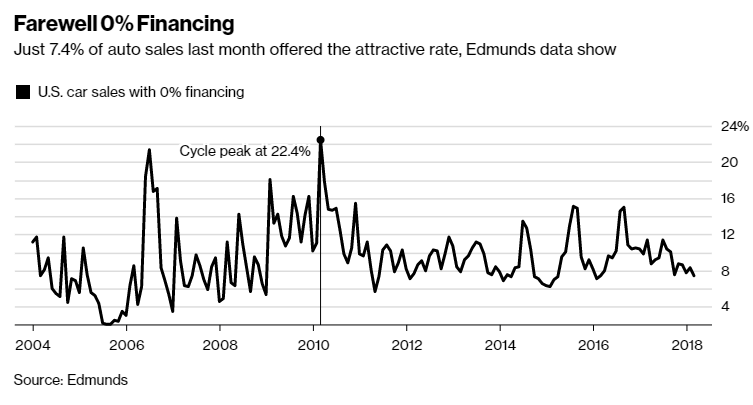 Ultra cheap borrowing costs have allowed auto dealers to push ever larger auto purchases by just telling new buyers to "finance it." This had been going on well before the current era of post-financial-crisis "stimulus," but the Fed's quantitative easing after 2008 helped prolong the era of cheap auto debt far longer than many might have expected.

If it weren't for this, we'd likely see auto sales totals that are far worse than what we've been seeing.

But, even with all this help from the central bank, if we look at inflation-adjusted, per capita totals for auto loans, we find that things still haven't returned to their previous peak levels.1 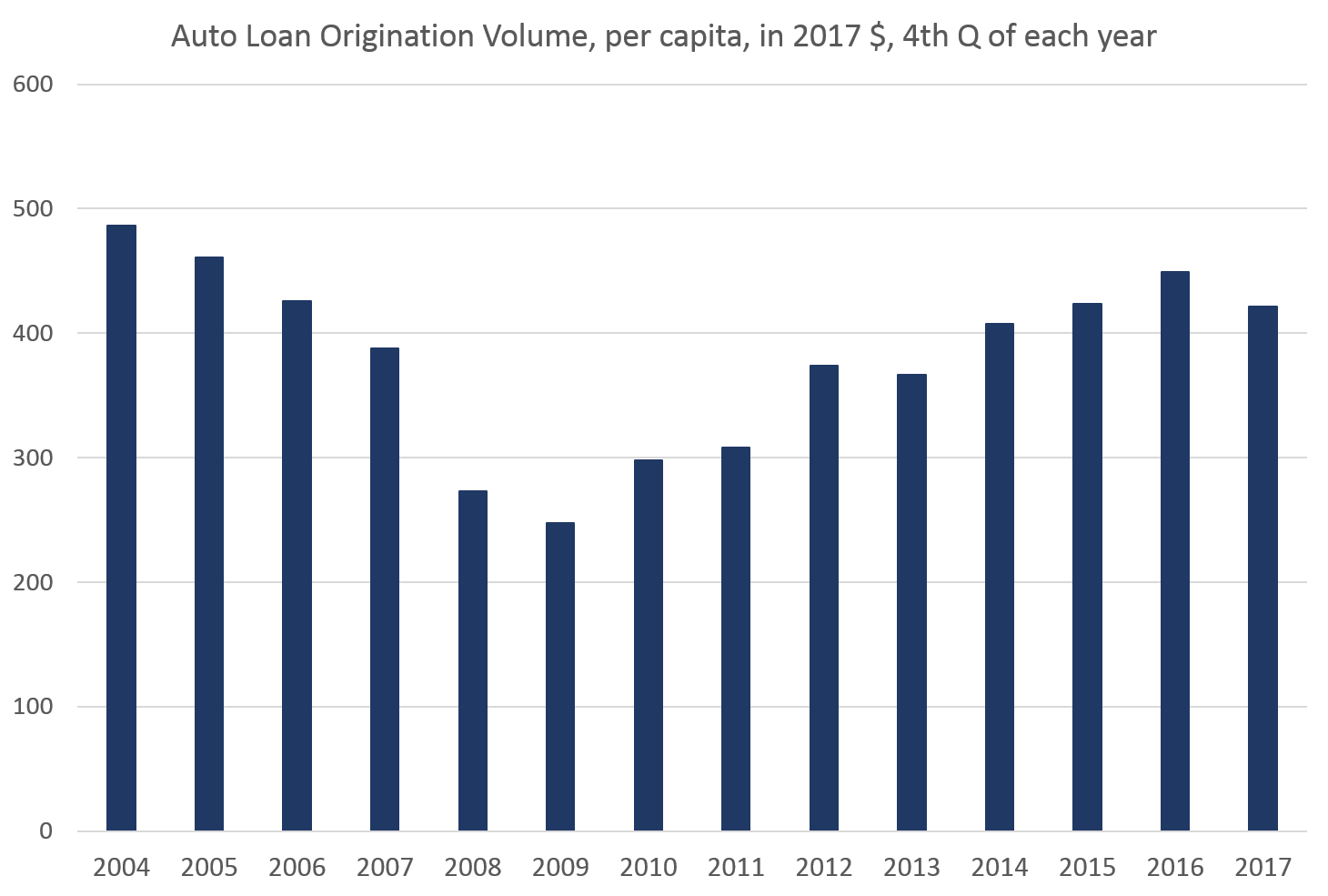 In the big picture, of course, this might be good news, and might indicate that fewer consumers see automobile ownership as something that justifies more debt. 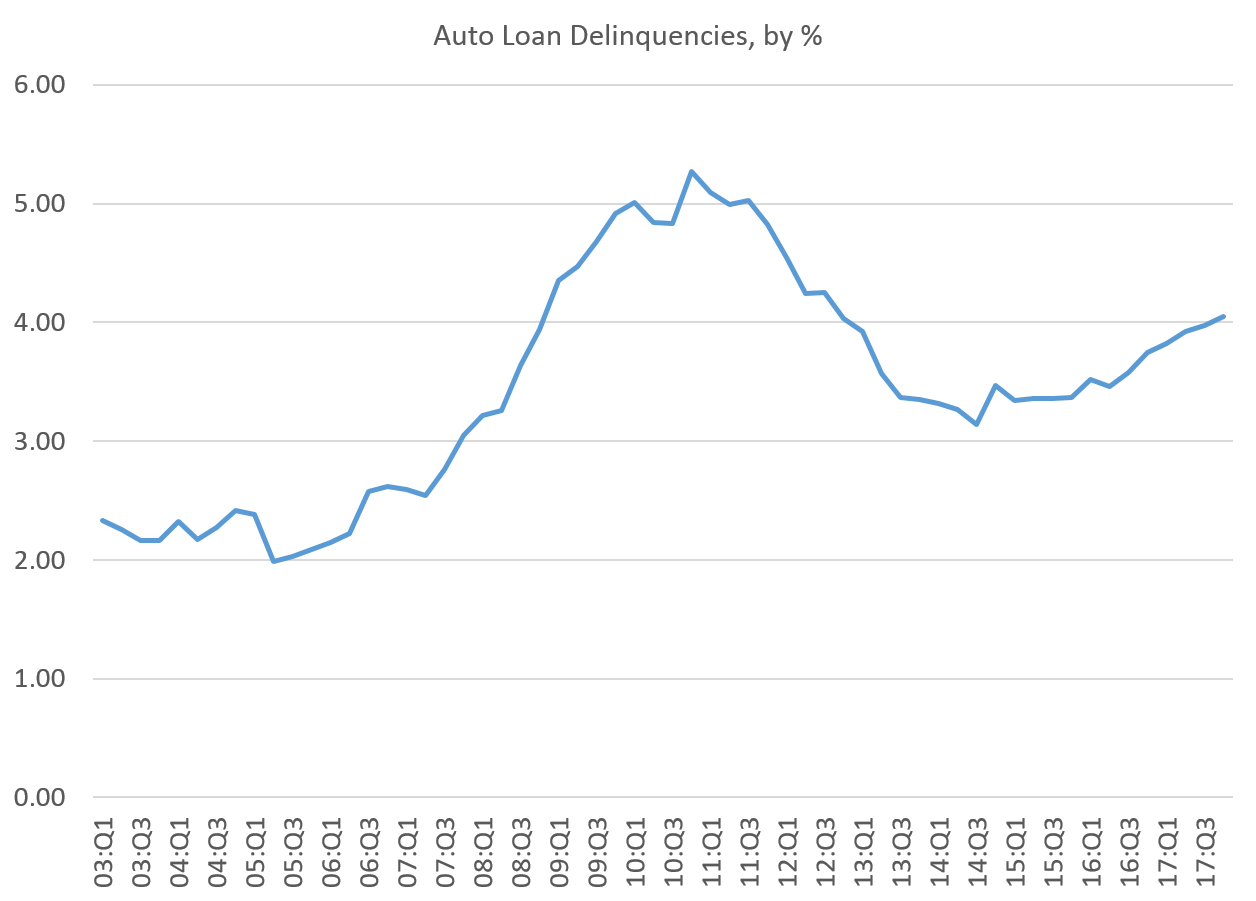 But a great many consumers are choosing to go into debt anyway. But even here, there's some bad news for the industry: more consumers are missing their payments. During the fourth quarter of 2017, auto loan delinquencies hit 4.05 percent. That certainly doesn't top 2010's peak level of 5.25 percent, but it is the highest delinquency rate we've seen since the fourth quarter of 2012 — making it a five-year high.2

The Rise of the Luxury Pickup Truck — and other Excesses

Even if total per capita debt levels haven't reached what we saw during the happy days of the last bubble, there's plenty of evidence than many auto buyers are happy to live it up.

As the AP reported late last year, we have now entered the era of the $80,000 pickup truck:

The F-Series Super Duty Limited, a luxury heavy-duty truck with a starting price of $80,835. It has custom two-tone leather seats, a heated steering wheel wrapped in hand-stitched leather and high-tech features like a 360-degree camera system that guides drivers when they’re hitching up a trailer.

While a $90,000 truck may be out of reach for many, the pickup truck market overall is seeing plenty of price growth:

The luxury trend has helped pickups outpace the industry in terms of the prices they command. So far this year, the average vehicle is selling for $34,671, up 38 percent from 2005. The average price of a full-size truck has jumped 54 percent in that same period, to $46,844.

(By contrast, the CPI increased 26 percent during the same period.)

While some groups of buyers may be clutching their wallets, there are plenty who are ready to spend.

This becomes more clear when we start to look at the lack of popularity in new cars at the bottom end.

Theoretically, it's possible to buy a new car for under $13,000 dollars. But, as the dealerships explain, no one actually wants to buy those cars. USA Today reports:

Using that new [Nissan] Versa as an example, the bottom-price model has a manual transmission. Few can or will drive a stick-shift nowadays. Moving up to the conventional four-speed automatic adds $1,000.

In addition to being hard to find, bare-bones cars just aren't that desirable, even among those who swear they "just want basic transportation." Often "basic" means sans air conditioning, power windows and a radio.

Power windows sounds like a luxury until you picture yourself reaching from the driver's seat across the car to hand-crank the passenger-side window.

And, with the resurrection of sub-prime auto loans in recent years, there are still many ways that potential auto buyers can get into a new car without having to settle for something that doesn't offer all the conveniences.

Even with subprime, loans, however, auto loans for borrowers with lower credit scores are looking less plentiful than ever. Whether this is due to caution on the part of buyers or lenders is not clear.3

In either case, it does appear that much of what's keeping the industry afloat is a surprisingly resilient demand for luxury trucks and other vehicles with expensive options included.

This aversion to truly "basic" automobiles might help explain why the personal saving rate fell to a ten-year low in January of this year. It also helps us see why household net worth in the United States still hasn't recovered from the last recession.

It seems that many car buyers are still quite optimistic about how much debt they'll be able to afford. We'll see how much longer that optimism lasts.