How Long Can the Fed Keep the Boom Going? | Mises Wire
Skip to main content

GET NEWS AND ARTICLES IN YOUR INBOXPrint
A
A
Home | Wire | How Long Can the Fed Keep the Boom Going?

How Long Can the Fed Keep the Boom Going?

The US bond market trades at a quite high valuation. For instance, the 10-year US Treasury bond presents a price earnings (PE) ratio of 43. In other words: It takes 43 years for the investor to recoup the bond’s purchase price through coupon payments; the bond market’s PE ratio even went up to 68 in June 2012 and July 2016, respectively. 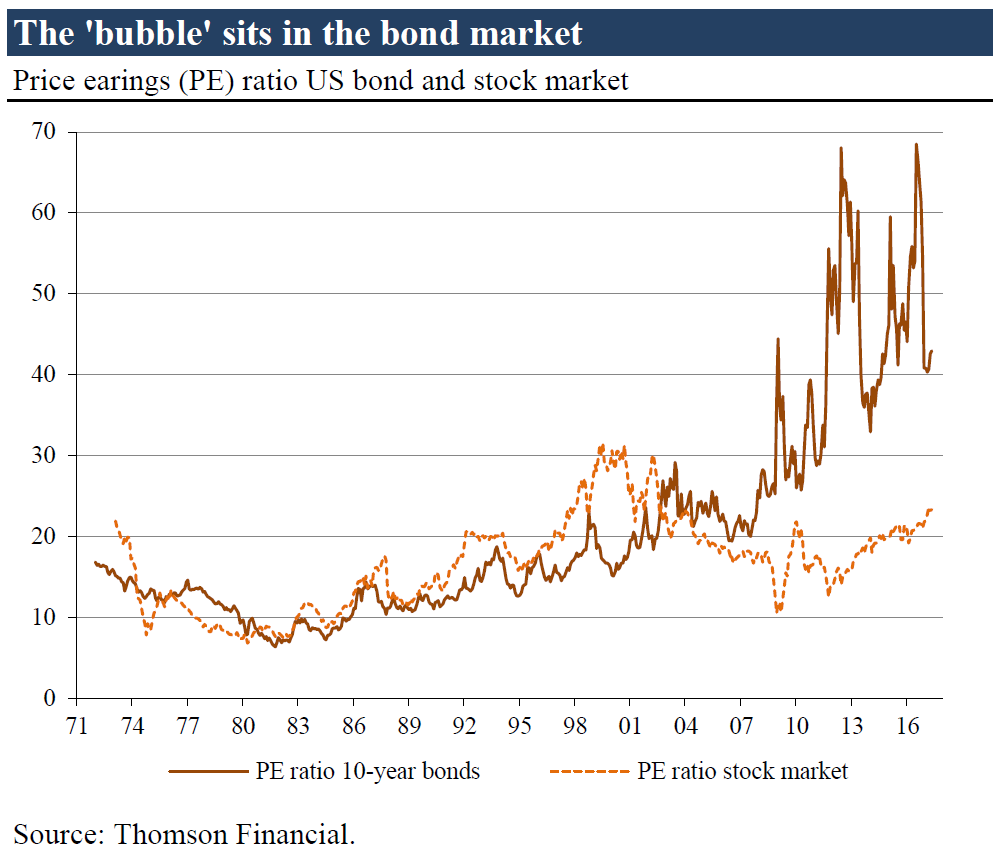 How come that US bond valuations are that high? Many economists would argue that the reason is a “savings glut”: Relative to investments, savings balances are high, resulting in a substantially decreased market clearing interest rate. There is, however, another, much less sanguine explanation:

The Fed has pushed interest rates to artificially low levels. It has, in the wake of the financial and economic crisis of 2008/2009, lowered banks’ funding costs to basically zero, and, furthermore, purchased government and mortgage bonds on a grand scale. This, in turn, has inflated bond prices and, accordingly, forced bond yields down.

By now, the Fed has changed course. It has raised its interest rate three times since December 2015, bringing it to 1 percent. This, however, has not had a significant impact on long-term yields. 10-year US Treasury yields still trade at a low 2.4 percent. Is it possible that the Fed has lost its grip on long-term yields? Should the “savings glut theory” be proven right in the end? 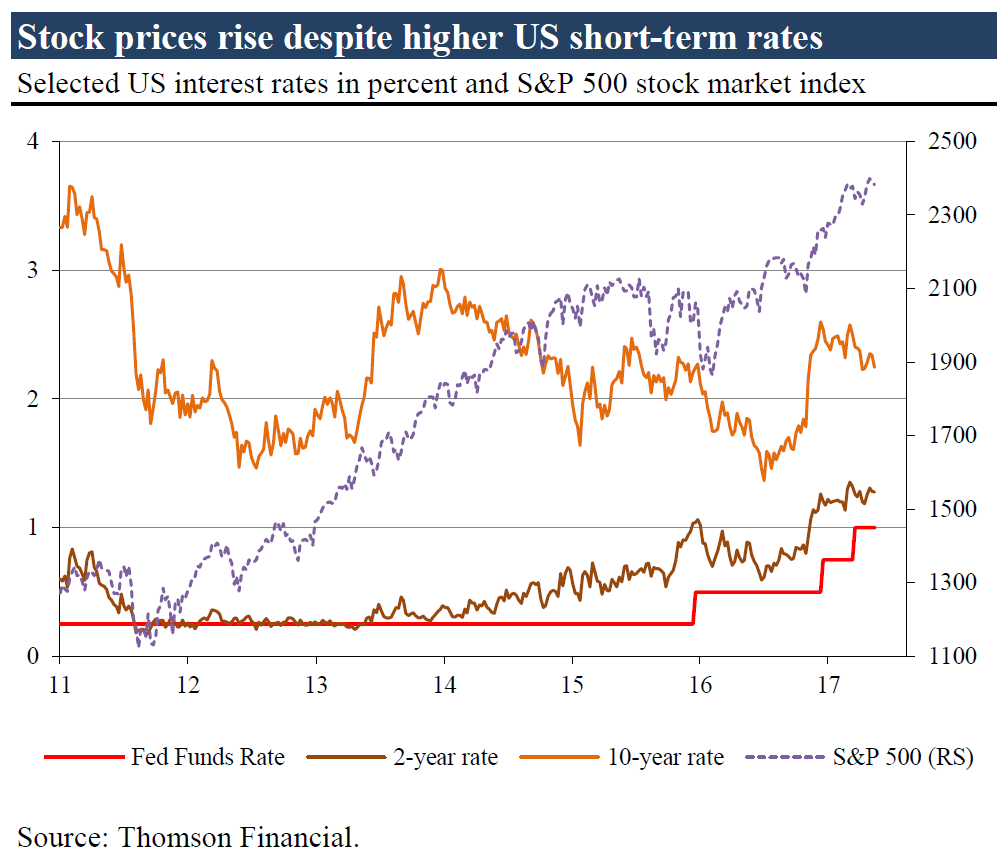 The still very low long-term interest rates in the US may, therefore, tell us something important: Investors expect the Fed to keep rates at fairly low levels in what lays ahead; they expect the central bank to refrain from returning yields to levels formerly considered “normal.” Against this backdrop, the latest series of rates increases is merely seen as a cosmetic adjustment.

Such an explanation would concur with the Austrian business cycle theory (ABCT). It implies that if and when unbacked paper, or: fiat, money is issued through bank credit expansion, market interest rates fall below their natural levels — the levels that would prevail if there was no bank credit expansion out of thin air.

This, in turn, sets an artificial economic upswing (boom) into motion. Consumption and investment go up. New jobs are created. The economy expands. Prices inflate. The boom, however, is built on sand. It turns into a bust as soon as market interest rates go up, that is if and when interest rates return to their natural levels.

To keep the boom going, the central bank must keep interest rates below their natural levels. It cannot raise them back to “normal.” First and foremost, higher interest rates would make the boom collapse. The credit market would collapse, stock and housing prices would tumble, and the financial system and the economy as a whole would go into a tailspin.

One may ask: Why is the Fed then raising rates then? Perhaps the Fed’s decision-makers think that the US economy has overcome the latest crisis and higher interest rates are economically justified. Others might wish to tighten policy for getting the short-term inflation adjusted interest rate out of negative territory.

Be it as it may, the disconcerting truth is this: Fed rate hikes will close the gap between the natural interest rate and the actual interest rate level. This, in turn, amounts to putting a brake on the boom, bringing it closer to bust. It is impossible to know with exactitude at what interest rate level the US economy would fall over the cliff.

One thing is fairly certain, though: The US economy, and with it the world economy, is caught between a rock and a hard place. Maybe the Fed’s current rate hiking spree will bring about the bust. Or the Fed refrains from raising rates further and keeps the boom going a little bit longer. Ludwig von Mises put the predicament as follows:

Given current bond and stock market valuations, investors seem to be fairly confident that the Fed will succeed in keeping the boom going, that the central bank will not overdo it in terms of raising interest rates. And yes, perhaps central bankers have learned a great deal in recent years, having become true maestros in holding up the make believe world of fiat money.

The investor should be aware of the damages caused by fiat money — for instance, boom and bust. At the same time, he should not run for the exit prematurely: The fiat money system might be held up for longer than some may fear and others might hope, so that keeping inflation-resistant assets may be more rewarding than betting on an imminent system crash.

Welcome to a New Chapter in the Latest Boom-Bust Cycle

The Fed admits inflation is a problem, so now begins the search to find a fix that doesn't involve a recession or...