How Inflation and Unemployment Are Related

A fall in the US unemployment rate to 4.6% in November from 4.9% in the month before, and 5% in November last year, has prompted some commentators to suggest that we are almost at the so-called natural rate, which is believed to be at around 4.5%.

It is held that once the unemployment rate falls below an "optimal" rate — called the Non-Accelerating Inflation Rate of Unemployment (NAIRU) — it sets off an inflationary spiral. 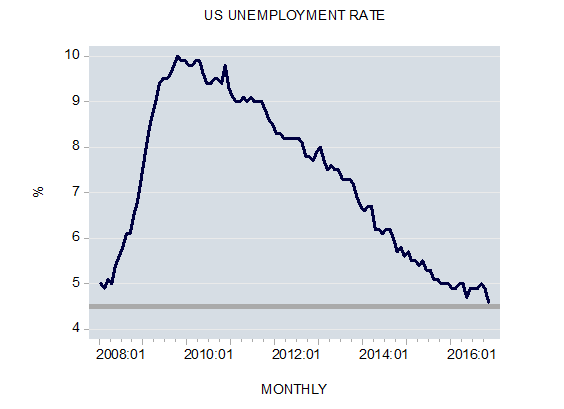 So from this perspective it will be difficult for President-elect Trump to implement his plan to lower tax rates and boost government outlays on projects including the improvement of roads and bridges without risking a strong increase in the rate of inflation. Or so it is held.

Note that in October, the yearly growth rate of the consumer price index already stood at 1.6% against 0.2% in October last year.

It also raises the likelihood that the Federal Reserve would have to adopt a more aggressive interest rate stance to counter any possibility for acceleration in the rate of inflation. 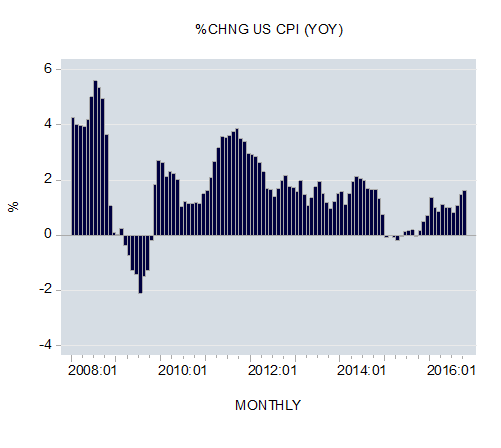 The NAIRU is an arbitrary measure, derived from a statistical correlation between changes in the consumer price index and the unemployment rate. What matters in the NAIRU framework is whether the theory "works," i.e., whether a decline in the unemployment rate below the NAIRU results in the acceleration in the rate of inflation.

Therefore we could easily conclude that in order to exercise control over the rate of inflation the central bank must carefully watch and control the rate of increases in Mr. Jones’s income. This example is no more absurd than the NAIRU framework.

The purpose of a theory is to present the facts of reality in a simplified form. The theory must originate from the reality and not from some arbitrary idea that is based on a statistical correlation.

Contrary to popular thinking, strong economic activity doesn't cause a general rise in the prices of goods and services and an economic overheating labeled as inflation. Regardless of the rate of unemployment, so long as every increase in expenditure is supported by production, no "overheating" can actually occur.

RELATED: "Inflation Is Not About Price Increases"

The overheating emerges once expenditure rises without being backed up by production, a situation that occurs when the money stock is increasing. Once money increases, it generates an exchange of nothing for something, or consumption without preceding production.

As a rule, increases in the money stock are followed by general increases in the prices of goods and services. Prices are another name for the amount of money that people spend on goods they buy. When money is injected it never goes to all the markets instantly but by stages — there is a time lag. Hence the reason for the time lag between changes in money and changes in prices.

A strengthening in the wealth generating process will permit the increase in the production of goods and services, i.e., a strengthening in economic growth. Consequently, this will correspond to the decline in the growth rate in the prices of goods and services. (Remember the loopholes for money creation out of "thin air" are sealed off.) This will also correspond to the decline in the unemployment rate.

Observe in a free unhampered economy with minimal government involvement in economic activity and in the absence of money generation out of "thin air" an efficient use of resources will take place. In such an environment no one would need establish the so-called NAIRU. Such an environment will be conducive for real wealth expansion, a low unemployment rate and a declining rate of inflation.

Also note that in a properly functioning market economy any form of unemployment will be of a voluntary nature. Individuals will be paid in accordance with their contribution to the production of wealth. Any one insisting on a wage rate above his or her contribution to the wealth generation will be unemployed.

However the chances that Donald Trump is going to embrace a smaller government with the loopholes for money creation out of "thin air" sealed off is probably nil.

Hence we suggest that any aggressive expansion in government outlays are likely to undermine further the process of wealth generation and lead to economic difficulties ahead.

Obviously if the wealth generation process is still capable of absorbing all the abuses on account of government expansion and the central banks’ reckless monetary policies, then the policies of Donald Trump and the Fed will appear to be successful.

This illusion is going to be shattered once the pool of real wealth will fall onto a declining path. Once this happens the economy will fall into a severe economic crisis.

Any aggressive loose stance by the Federal Reserve and the government will only make things much worse. Remember government is not a wealth generating entity — it only consumes real wealth.

The people selling us democracy believe in it the same way George F. Babbitt believes in a new listing from the Babbitt-Thompson Realty Company.

The Corrupt Bargain and the Preservation of Slavery

Slavery was now driven into the heart of the new constitution: in the three-fifths clause, in the protection of slave importation for twenty years, in the fugitive slave clause, and even in the congressional power to suppress insurrections within the states.

Donald Trump—despite adopting a number of economically intelligent policies—was completely unwilling to rein in federal spending. Then things got even worse.

Biden's Family Leave Is Yet Another Attack on the Family

Only a bureaucrat would assume that putting a small child in public school is just as effective as keeping the child at home with a parent. Unfortunately for Biden, the research isn’t on his side.

Keynes Thought Scarcity Would Disappear in the Near Future. Boy, Was He Wrong.

It is not surprising that Keynes looks at the economy from the perspective of a government bureaucrat; this is exactly what, for a significant part of his life, he was. It was for his bureaucratic "service," not his economics, that he was elevated to the peerage.

David Howden is Chair of the Department of Business and Economics and professor of economics at St. Louis University...