GET NEWS AND ARTICLES IN YOUR INBOXPrint
A
A
Home | Wire | Homeownership at 51-Year Low: The Feds Have Failed

Homeownership at 51-Year Low: The Feds Have Failed

Americans have long regarded owning a home to be largely synonymous with the so-called "American dream" although high homeowernship rates are not necessarily synonymous with a high-income prosperous society. Switzerland and Germany, for example, have homeownership rates well below that usually found in the US.

Nevertheless, the US government has long made increasing homeownership an important policy goal, and this has led to a number of large and costly programs and institutions including Fannie Mae and Freddie Mac, FHA, and a plethora of federal regulations surrounding mortgage lending and banking.

Judging by the government's own criteria, it has all been a failure.

According to the most recent homeownership data from the US Census Bureau, the homeownership rate in the United States is now at the lowest level it's been since the bureau began tracking quarterly data in 1965.

As of the second quarter of 2016, the homeownership rate in the United States was, according to the Bureau, 62.9 percent. That's exactly equal to the rate recorded during the third quarter of 1965 — nearly 51 years ago: 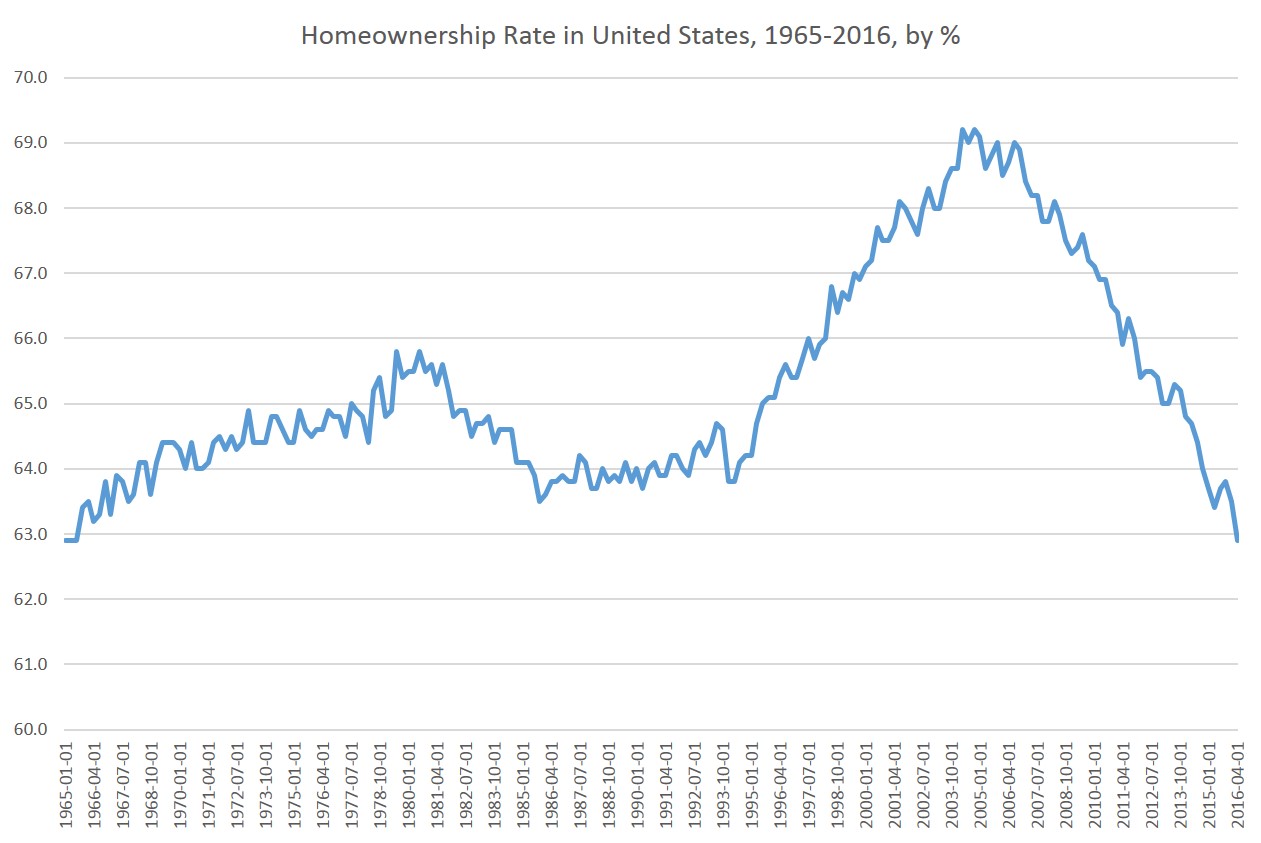 Even before the last housing bubble popped, the homeownership rate had begun to fall, and since the homeownership rate peaked in 2004 at 69.2 percent, the overall trend has been downward. The rate has gone into virtual free-fall over the past two years as home prices have continued to rise and incomes have not kept up.

Back in May, I looked at median household and median family income and concluded that, at best, real earning power in the United States is flat:

Meanwhile, home prices are outpacing both inflation and incomes.

Nevertheless, the fact remains that homeownership has long been a goal of both fiscal and monetary policy in the United States. This has led to numerous negative affects, including the housing bubble which led to the 2007-2009 recession, and which continues to dampen the very weak recovery we are now living through. The policy orientation toward increasing homeownership also led to massive malinvestment into the real estate economy, which eventually led to a jobs bubble and, predictably, joblessness for many after the bubble burst.

Increasing homeownership has also long been used to justify the central bank's easy-money policies since, it is said, easy money is good for debtors who repay debts in devalued currency.  Ignored, of course, is the fact that easy money has driven up housing prices and other components of the cost of living, making first-time homeownership far less feasible for many households.

There's no reason to believe that any of the homeowership-boosting efforts — from Fannie Mae to FHA to the Community Reinvestment Act  — have done anything to actually increase the homeownership rate over the past fifty years. Indeed, had those agencies and programs not existed, homeownership might be higher today, since, in a less regulated market, those who received loans might be more likely to actually make their payments consistently and on time. In either case, without the housing bubbles created by these policies, households would not have wasted time and resources on buying homes on which they foreclosed later, or on moving into real-estate sector jobs that would later disappear.

Since federal policy efforts have apparently done nothing to increase homeownership, let's turn to taking a hard look at if we need the federal "homeownership industry" at all. Repealing the tens of thousands of pages of laws and regulations related to promoting homeownership over the past fifty years might be a good start.

Nickel: How Government Alchemists Turned a Base Money Hard and Now Are Expected to Kill It.

Nickel is a base metal the government used to replace silver. Since then, the government has inflated so much that even nickel is too valuable for US coinage.