The True Cost of the Homeownership Obsession 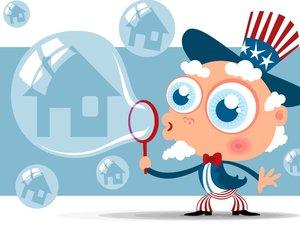 In 2014, the US homeownership rate fell below 65 percent, which means it’s back to where it was during the 1970s and much of the 1990s. Various federal agencies have long made homeownership a priority, and have introduced a bevy of government and quasi-government programs including the GSEs like Fannie Mae, FHA-insured loans, VA-insured loans, the Bush administration’s “American Dream Downpayment Initiative” and, of course central bank meddling to keep interest rates nice and low for the mortgage markets. 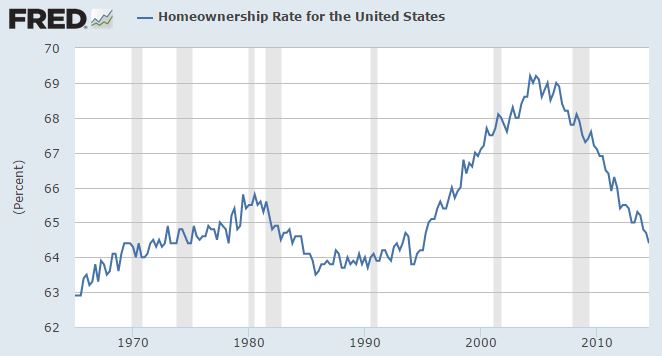 And for all their efforts, all the inflation, and all the taxpayer-funded subsidies poured into bailouts, we have a homeownership rate at where it was forty years ago. During the housing boom, though, homeownership rates climbed to unprecedented levels, cracking 70 percent or more in many parts of the country. When the boom in homeownership came to an end, it was not a painless matter of people selling their homes. It was a very costly readjustment process, and it was something that would have been completely unnecessary and would never have happened to the degree it did without the interference of Congress, the central bank, and the easy-money induced boom they engineered.

The political obsession with raising homeownership rates dates back to the New Deal when Roosevelt began introducing a variety of homeownership programs designed to drive down the percentage of households that were renting their homes. Based on romantic ideas of frontier homesteading, it was assumed that owning a house was the only truly American way of living. It was during this time that the thirty-year mortgage — an artifact of government intervention — became a fixture of the mortgage landscape. And homeownership rates did indeed increase. And with it, debt loads increased as well.

From 2002 to 2007, those of us who worked in or around the mortgage industry were amazed at just how easy it was to get a loan even with a very sketchy credit history and unreliable income. Only token down payments were necessary. Many of these less-than-impressive borrowers bought multiple houses. Behind all of it was the Federal government and the Fed forever repeating the mantra of more homeownership, lower interest rates, more mortgages, and rising home prices. The rising homeownership levels were for the populists. The rising home prices were for the bankers and the existing homeowners.

The housing bubble became the gift that seemingly never stopped giving because with all this home buying came millions of new jobs in real estate, construction, and home mortgages. Seemingly everyone looked to real estate as a source of easy money. The bag boy at your local grocery store was selling condos on the side, and everyone seemed to be selling new home loans. Home builders couldn’t keep up with the orders and contractors had six-week waiting lists.

We know how that all ended. The foreclosure rate doubled from 2002 to 2010. Implied government backing of Fannie Mae and Freddie Mac became explicit government backing, and numerous too-big-to-fail banks which had invested in home mortgages were bailed out to the tune of hundreds of billions of taxpayer dollars. Some lenders like Countrywide and Indymac essentially went out of business, and all lenders (including many who were not bailed out) faced costs ranging from 20,000 to 40,000 per foreclosure in lost revenue, legal fees, and other costs. Foreclosures begat foreclosures as foreclosure-dense neighborhoods were most prone to price drops, leading to negative equity, which in turn led to even more foreclosures. Ironically, the most responsible borrowers — the ones who made sizable down payments and reliably made payments, and thus had more skin in the game — were the ones who suffered the most and who had the most to lose by simply walking away from their homes.

Real estate agents, loan industry professionals, construction workers, and others who relied on the home purchase industry lost their jobs and had to spend time and money on retraining in completely new industries. Or they were simply among the millions who collected unemployment checks and food stamps supplied by those who still had jobs.

Was the Bubble Worth It?

And for what? The opportunity cost of it all was immense and during the bubble years, total workers in housing-related employment ballooned to 7.4 million, many of whom were fooled by the bubble into thinking the home-sales industry was a good long-term career. To get these jobs they spent many hours and thousands of dollars on certification, training, and job experience. After the bubble popped, three million of those jobs disappeared. From 2001 to 2006, employment in the mortgage industry increased by 119 percent, only to have most of those jobs disappear from 2006 to 2009.

Now, there will always be people who make bad career decisions, and there will always be frictional unemployment, but without the housing bubble and the myriad of federal programs and central bank pumping behind it, would millions of workers have flooded into these industries knowing that most of them would be unemployable in that same industry only a few years later? That seems unlikely.

Moreover, might we be better off today if those same people, many of whom were very talented, had invested their time and money into other fields and other endeavors? What businesses were never opened and what products were never made because so many flocked to the housing sector? We’ll never know.

Thanks to the government’s relentless drive for more homeownership and ever-increasing home prices, millions of workers concluded that real-estate jobs were the best bet in the modern economy. They thought this because investors chasing yield in a low-interest-rate environment were pouring their money into owner-occupant housing in response to government guarantees on single-family loans and easy money for mortgage lending.

The people were promised more homeownership, but after just a few years, it has become clear they didn’t get it. At the same time, Wall Street was promised high home prices, and when the prices faltered, it was offered bailouts instead. Wall Street got its bailouts.

The cost of the housing bubble is often calculated in dollar amounts that can easily be counted on Wall Street, but for those who aren’t politically well-connected — for ordinary workers, homeowners, construction firms, and many others — the cost in time and lost opportunities will forever remain among the many unseen costs of government intervention.