"Gun Violence" as a Rhetorical Trick in the Gun-Control Debate

In its most recent attack on gun ownership, The New York Times went out of its way to confuse gun homicides with homicide in general. As I noted here, this is a rhetorical trick used to mask the true homicide rates in other countries in order to make the United States look like an outlier.

Another trick employed by gun control advocates is to lump gun-inflicted suicides in with gun homicides as in order to inflate the total number of "gun violence" events.

This tactic was employed by CNN after the Orlando shootings, as can be seen in this video. The host, Carol Costello, states "more than 100,000 people are victims of gunshot wounds." Costello reports that the number is "stunning" and clearly believes 100,000 to be a very large number. Note that Costello does not present the number as a percentage or ratio. If she did, she'd realize that 100,000 people (in a country of 318,000,000) is 0.03 percent of the population. Moreover, the way it's phrased might lead viewers to believe that Costello is talking about 100,000 fatalities. Viewers would be wrong in assuming this, since fatalities from gunshot wounds, according to the CDC, equaled 33,636 in 2013, or one-third the number Costello quotes. Costello is obviously including all non-fatal injuries in an effort to use more dramatic-sounding numbers. (See Table 18 in this document.)

Costello also admits that this number "includes suicides." That's fair enough, but how much of that "gun violence" is due to suicide? Well, it turns out that a solid majority of it is suicides. Indeed, in the 2013 data, there were nearly twice as many firearm suicides (21,175) as there were gun homicides (11,208). So, Costello begins a discussion about the Orlando shootings by talking mostly about suicide, which is irrelevant to the purported topic of discussion which is mass shootings at night clubs.

Other commentators have even attempted to claim that suicide rates are notably higher where there are higher gun ownership rates. Looking at the international data on gun ownership from the Small Arms Survey, it's hard to see how anyone could make this assertion seriously. Indeed, if we look at suicide rates, we see that the US is not especially notable for its suicide rate: 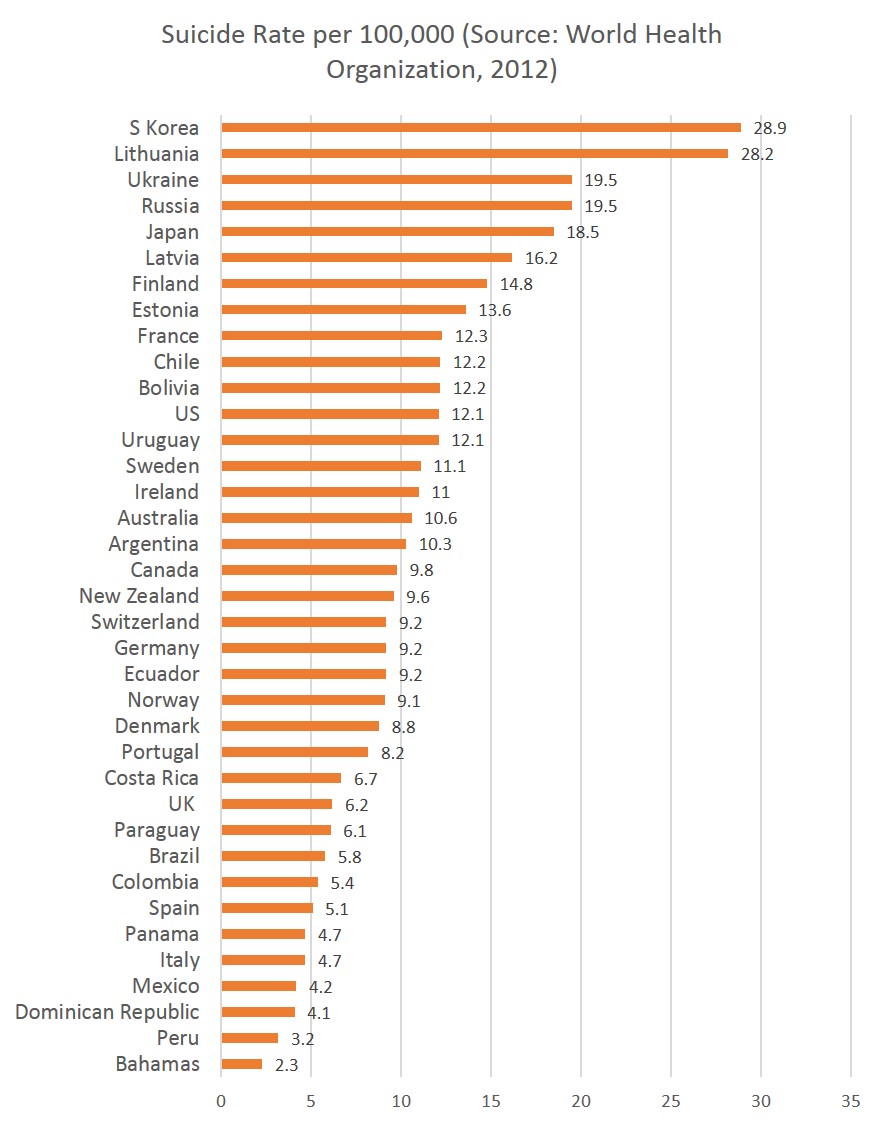 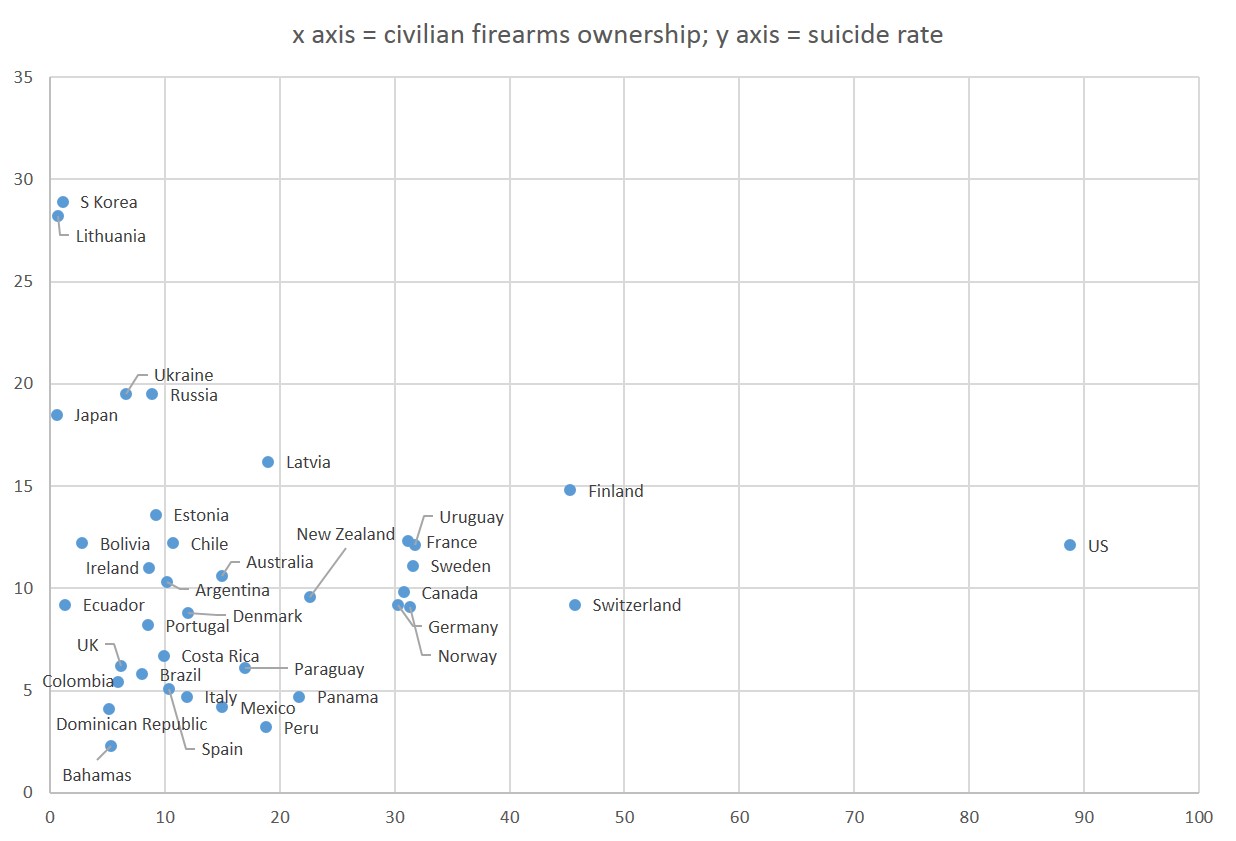 Indeed, if one wanted to build a case for variables that lead to suicide, one might point to "high levels of wealth" or "living at high latitude." Or, as has been observed in the United States, high altitude may be a problematic factor as well. Obviously, the fact that private gun ownership is nearly non-existent in Japan and South Korea has not done much to keep the suicide rate low in those countries.

So, any time a pundit refers to "gun violence" when the discussion is about homicide, the statistics being used are probably being used for the purposes of obscuring the facts about actual homicide rates.

Finally, Costello, who, goes into the interview unprepared and ill-informed, is unaware of the CDC's 2013 study on gun use in which the CDC reports:

Defensive uses of guns by crime victims is a common occurrence, although the exact number remains disputed (Cook and Ludwig, 1996; Kleck, 2001a). Almost all national survey estimates indicate that defensive gun uses by victims are at least as common as offensive uses by criminals, with estimates of annual uses ranging from about 500,000 to more than 3 million per year (Kleck, 2001a), in the context of about 300,000 violent crimes involving firearms in 2008 (BJS, 2010). On the other hand, some scholars point to radically lower estimate of only 108,000 annual defensive uses based on the National Crime Victimization Survey (Cook et al., 1997). The variation in these numbers remains a controversy in the field. The estimate of 3 million defensive uses per year is based on an extrapolation from a small number of responses taken from more than 19 national surveys. The former estimate of 108,000 is difficult to interpret because respondents were not asked specifically about defensive gun use

(See the full report, "Priorities for Research to Reduce the Threat of Gun-Related Violence" here. The report was discussed somewhat at length in this Slate article. )

So, the number lies somewhere between 100,000 and 3,000,000. Even if one were to take the low-end estimate of 108,000, that's three times the number of fatalities that result from homicides or suicides, and it's nearly ten times the number of firearm-related homicides. If 100,000 is such an immense number for Costello when used to sum up "gun violence" why is it a negligible number when used to describe defensive use of firearms (as with this defensive use at a South Carolina night club in June)?