GET NEWS AND ARTICLES IN YOUR INBOXPrint
A
A
Home | Wire | End Airline Protectionism: Allow Foreign Carriers on Domestic Routes

In the wake of the United Airlines debacle — in which the airline had airport police assault one of its own customers — customers have begun to ask why there doesn't seem to be more competition for United to contend with. They ask: would United treat its customers so poorly if they had more competition?

Is the Airline Industry Competitive?

Compared to governments  — which enjoy near-absolute monopolies — airlines are quite competitive. But compared to many private-sector industries, they are not especially competitive.

It is true that a small number of firms dominate the airline business in North America. Investopedia claims the three top carriers enjoy 70 percent of the business, and Salon and the NYT say the top four enjoy 80 percent.

By the numbers provided here, we find that the top four combing for around 80 percent according to 2015 enplaned passengers: 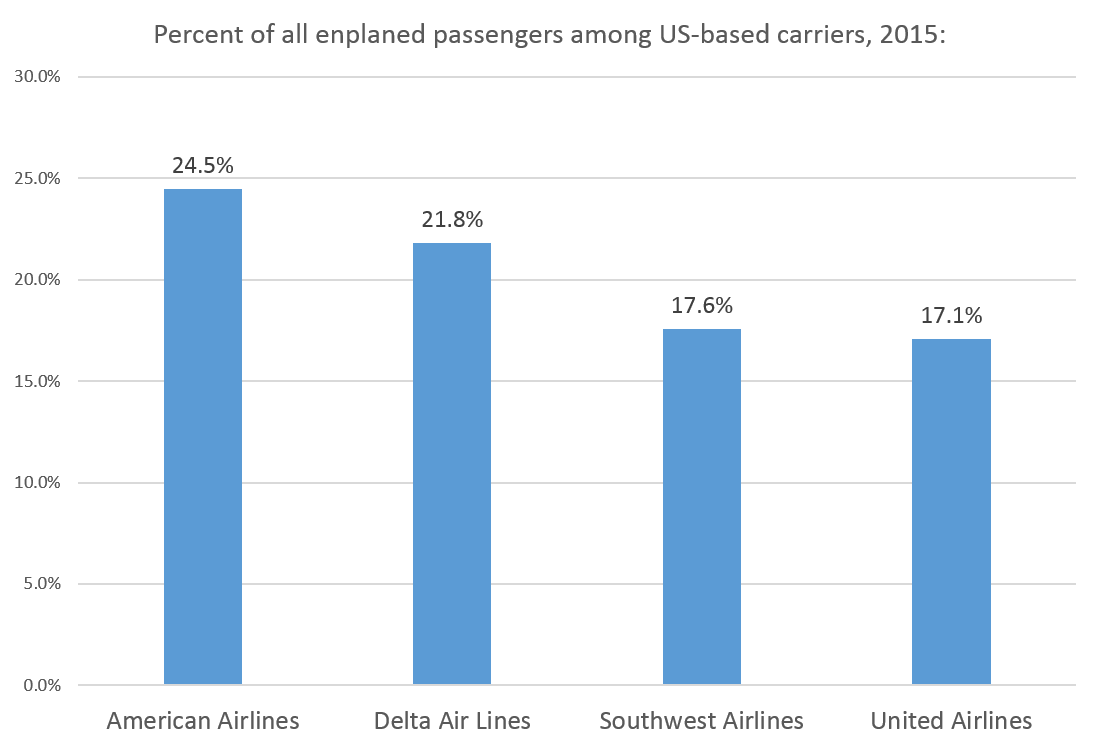 Nevertheless, the fact that there are only a handful of firms dominating the industry does not prove that the airline business is an oligopoly or a cartel or is "non-competitive." True oligopolies and monopolies can only exist when governments fully prevent firms from entering the marketplace. The relatively few number of airlines in the US may be due to the capital-intensive nature of airlines as much as it is due to government intervention.

But, government regulations do limit competition and market entry to an extent. They do this in several ways, including:

Moreover, the generally-high level of bureaucratization in the airline business means that airlines spend a sizable amount of effort satisfying government bureaucracies rather than concentrating on their own customers. As Per Bylund has explained, regulated markets destroy consumer sovereignty.

So, yes, there are multiple government-imposed constraints that indirectly limit competition in the airline industry — to the benefit of incumbent firms like United.

The Ban on Domestic Routes for Foreign Carriers

But there is also one big government regulation that directly protects all domestic airlines from competition: the US ban on foreign carriers.

International airlines do operate in this country, of course, but they're forbidden from flying point-to-point destinations domestically. These laws, which are meant to protect American consumers and jobs, are having the exact opposite effect. Eliminating — or at least partially lifting — outdated restrictions could significantly increase competition and improve customer service.

The author of the above is wrong about at least one thing. The protectionist laws eliminating foreign competition are not "outdated." They were never a good idea to begin with. Protectionist laws such as the ban on foreign carriers have always favored the owners of domestic firms at the expense of their customers.

United Airlines is more easily able to weather PR disasters because US law prohibits foreign carriers from coming in and offering services that don't involve being smacked around by police when the airline can't count how many seats it has on the plane.

Were free trade allowed in the airline business, customers could potentially elect to fly the Irish carrier Aer Lingus — for example — between Boston and New York rather than United. This would, of course, drive down prices and give more choices to consumers.

Now, we can already predict what the protectionists will say. "Why, don't you know that foreign airlines are subsidized by foreign governments? Those airlines will provide services at below-market prices!" This presumably will mean American firms will be unable to compete.

This is the classic "argument" against so-called dumping and the proper response to this is always the same: "so what?"

It would not be a problem for Americans if the UK taxpayer were subsidizing British Airways flights between New York and Miami. That's too bad for the British taxpayer, of course, but as Murray Rothbard notes,  American customers would simply be enjoying lower airfares thanks to free trade. The argument against dumping has long relied on the largely imaginary concept of "predatory pricing." Rothbard continues:

For decades, indeed, opponents of the free market have claimed that many businesses gained their powerful status on the market by what is called "predatory price cutting," that is, by driving their smaller competitors into bankruptcy by selling their goods below cost, and then reaping the reward of their unfair methods by raising their prices and thereby charging "monopoly prices" to the consumers. The claim is that while consumers may gain in the short run by price wars, "dumping," and selling below costs, they lose in the long run from the alleged monopoly. But, as we have seen, economic theory shows that this would be a mug's game, losing money for the "dumping" firms, and never really achieving a monopoly price. And sure enough, historical investigation has not turned up a single case where predatory pricing, when tried, was successful, and there are actually very few cases where it has even been tried.

Even With More Competition, Many Will Still Choose United

But even when a moderate amount of competition is available — as is the case with US airlines — it's extremely likely that many of United's customers will stay with the airline even in the wake of Sunday's beat-down.

After all, taking another airline might mean a slightly higher price, or it might mean fewer non-stop flights. Or it might mean taking flights at slightly less convenient times. Regardless of the industry, two firms virtually never offer exactly the same product. Thus, even with multiple firms to choose from, many customers will still prefer the mix of flight times and locations offered only by United. Many potential passengers will decide to "chance it" and recognize the odds of being bloodied in a confrontation with the airline are small.

But don't expect airlines to count on this sort of company loyalty when faced with the prospect of foreign competition. No firm wants to have to deal with more competitors, and fortunately for America's big airlines, the federal government is very willing to help.