GET NEWS AND ARTICLES IN YOUR INBOXPrint
A
A
Home | Wire | Does Government Spending Create More Economic Growth?

After the 2007-2009 global financial crisis, fears of ballooning public debt and worries about the drag on economic growth pushed authorities in some countries to lower government spending, a tactic that economists now think may have slowed recovery. Note that in the United States the total debt to GDP ratio stood at 349 in Q1 this year.

In a paper presented at the Kansas City Federal Reserve’s annual economic symposium on August 26 2017, Alan Auerbach and Yuriy Gorodnichenko from the University of California suggested that “expansionary fiscal policies adopted when the economy is weak may not only stimulate output but also reduce debt-to-GDP ratios”. (Fiscal Stimulus and Fiscal Sustainability, August 1,2017, UC – Berkley and NBER). 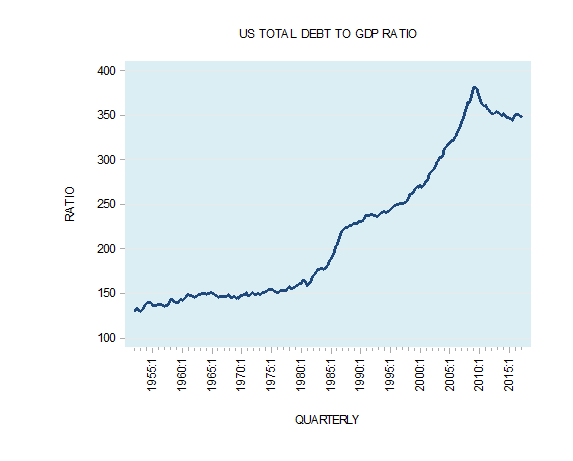 Some commentators are of the view that these findings may be welcome news to central bankers who face limited options of their own to combat a future downturn, given existing low interest rates and low inflation rates in their economies. "With tight constraints on central banks, one may expect — or maybe hope for — a more active response of fiscal policy when the next recession arrives," the University of California researchers wrote.

These findings are in agreement with Nobel Laureate in economics Paul Krugman, and other commentators that are of the view that an increase in government outlays whilst the economy is relatively subdued is good news for economic growth.

So if for some reason people have become less confident about the future and have decided to reduce their spending this is going to weaken the flow of spending. Once an individual spends less, this worsens the situation of some other individual, who in turn also cuts his spending.

Following this logic, in order to prevent an emerging slowdown in the economy’s growth rate from getting out of hand, the government should step in and lift its outlays thereby filling the shortfall in the private sector spending.

The view that an increase in government outlays can contribute to economic growth gives the impression that the government has at its disposal a stock of real savings that can be employed in emergency situations.

Once a recessionary threat alleviated, the government may reduce its support by cutting the supply of real savings to the economy. All this implies that the government somehow can generate real wealth and employ it when it sees necessary. Obviously, this is not the case.

Given that the government is not a wealth generator, whenever it raises the pace of its outlays it has to lift the pace of the wealth diversion from the wealth-generating private sector.

Hence the more the government plans to spend, the more wealth it is going to take from wealth generators. By diverting real wealth towards various non-productive activities, the increase in government outlays in fact undermines the process of wealth generation and weakens the economy’s growth over time.

The whole idea that the government can grow an economy originates from the Keynesian multiplier. On this way of thinking an increase in government outlays gives rise to the economy’s output by a multiple of a government increase.

However, is it possible that an increase in government will give rise to more output as popular wisdom has it? On the contrary, it will impoverish producers.

Producers are forced to part with their product in an exchange for goods and services that are likely to be on a lower priority list of producers and this in turn weakens the flow of production of final consumer goods.

Not only does the increase in government outlays not raise overall output by a positive multiple, but on the contrary this leads to the weakening in the process of wealth generation in general. According to Mises,

Contrary to our University of California researchers and commentators such as Krugman, at no stage of the economic cycle can an increase in government outlays be supportive to economic growth. On the contrary, what is required is to cut government outlays as much as possible, thus leaving more wealth in the hands of genuine wealth generators.