Danish Central Bank Stumbles with Its Currency Peg to the Euro

Denmark has been mentioned a few times during the American election campaign by Democrats who favor larger government and high redistribution of income, but also pundits like Paul Krugman have written about Denmark in his October 19th column at The New York Times. Fortunately most of his fiscal and general economic Keynesian points have been refuted in Episode 6 of Contra Krugman by Thomas Woods and Robert Murphy. But, some points regarding monetary policy need attention as well.

The Danish currency, the "krone," was initially pegged in 1982 to the powerful and relatively low-inflationary German deutsche mark. The reason to introduce the fixed exchange rate policy was to avoid high inflation, loose monetary policy and to restrain the Danish politicians who had by then brought the country near bankruptcy. The fixed exchange-rate policy earned such tremendous political success that it has been in effect for 34 years and even today no other policy option is seriously considered.

Since the creation of the ECB in 1999 and the end of the deutsche mark, the krone has been pegged to the ECB in charge of the euro.

Ever since the European debt crises of 2009 the ECB has held interest rates at record low levels, and for some years even negative interest rates. Thus when Professor Krugman claimed that Danish monetary policy is one of the problems with Denmark, he is correct, but for the wrong reasons. Interest rates have been massively suppressed since the financial crises of 2008 and especially since the debt crises the following year. Thus the Danish fixed exchange-rate policy today implements exactly the loose monetary policy which Denmark fled from in 1982. The image below shows the accumulation of foreign exchange-reserve and interest rate spread between Nationalbanken and ECB, which since 2010 has been negative. 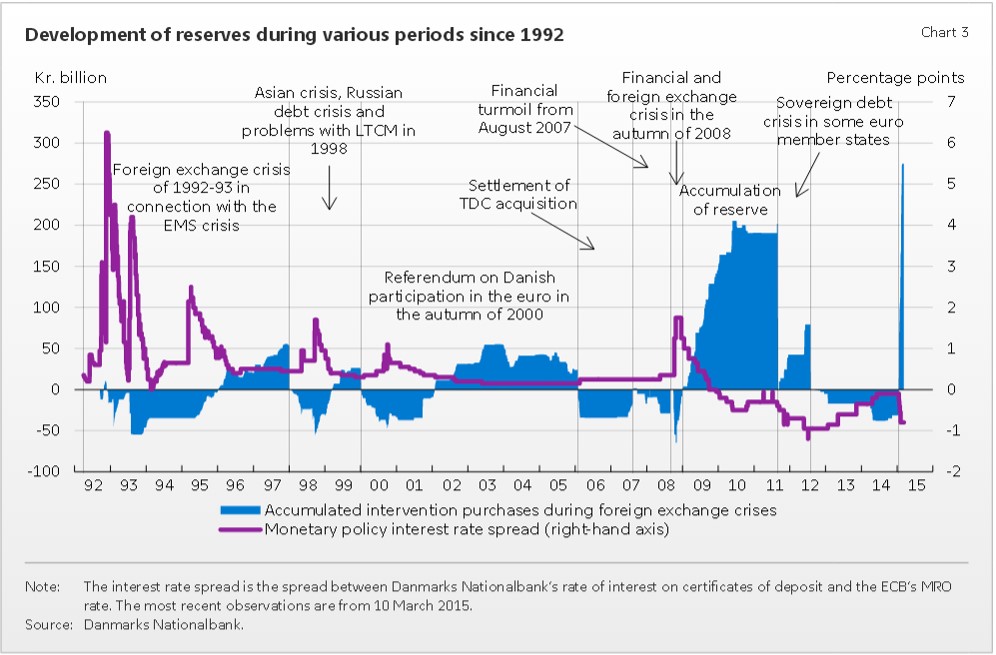 In order to maintain the currency peg it is imperative that Nationalbanken is considered by market participants as trustworthy and predictable, and every move in the rate of interest at ECB is usually promptly followed by announcements the same day from Nationalbanken. As long as the policy is trustworthy any deviation from the politically fixed central exchange rate will be suppressed partly by market participants in expectation that larger deviations will prompt Nationalbanken to intervene in the currency market.

Nationalbanken has a 34 year history of maintaining the currency peg. Thus they are convinced that their trustworthiness is excellent. However, at the introduction of the quantitative easing program of the ECB the Danish central bank stumbled.

Problems began 15th of January 2015, at 9.00 in the morning when the Swiss National Bank (SNB) announced an immediate discontinuation of the Swiss currency peg to the euro. SNB also cut the interest rate by 0.5pct from -0.25pct to -0.75pct. Within the first hour of the announcement, the Swiss franc soared more than 30pct but settled at 19pct increase in total at the end of the day.

Four days later, 19th of January, Nationalbanken cut its certificate of deposit rate by 0.15pct to -0.20 after days of intervention in the currency market. In the press release, nothing was mentioned of the actions of the SNB.

22th of January, one week after the action of the SNB, the ECB president, Mario Draghi, announced the €1.100 billion quantitative easing program.

The eyes of the market participants now turned to Denmark — the last currency still pegged to the euro. What would Nationalbanken do to mimic the new ECB policy?

Nationalbanken reduced its certificate of deposit rate of interest by merely 0.15pct, to -0.35pct. In the press release Nationalbanken mentioned only currency market intervention as the reason for the rate adjustment; it gave no indication of responding to the ECB program. On the 29th of January rates were cut again by 0.15pct. Still the press release mentioned nothing of the quantitative easing program or the action of the SNB. Currency market interventions were the only explanation for the rate adjustment.

During the month of January the foreign exchange-rate reserve held at Nationalbanken increased at a record pace of 106 billion DKK for that month (the former record was reached during the financial crises of 39.9 billion DKK during december 2008).

What turned out to be the last rate reduction was announced 5th of February as the rate was cut by 0.25pct reaching the final rate of -0.75pct (the same as SNB had originally moved to in a single announcement). This time around Nationalbanken finally mentioned the action of the SNB and the quantitative easing program of the ECB. In other words, it would take no less than 14 days before Nationalbanken would match the policy change by ECB, and 21 days if you count the shock which SNB had created.

With January and February combined, a whopping 278 billion was added to the foreign exchange-reserve of Nationalbanken and the interest rate was kept at -0.75pct for the remainder of 2015 in order to reduce the foreign exchange-reserve to the pre-2015 level. The interest rate was not increased until 8th of January 2016 by a mere 0.1pct to -0.65pct.

Starting from middle of 2014, Danish manufacturing industries for exports experienced a boom, which was amplified by the credit expansion following the QE program. The economy was growing so fast that it was believed that finally the effect of the financial crises was over. In fact, during May 2015 the government issued press releases saying that the recovery is on its way . This, however, turned into bust already during autumn of 2015 when the revised GDP figure for the third quarter revealed a shocking 0.4pct drop on its first revision. The second revision in March 2016 revised it down to -0.6. The 4th quarter showed a growth rate of 0.1pct after its first revision from originally 0.2, and if this number is revised further down in the next revision, Denmark could technically be back in recession. Throughout 2015 Nationalbanken released quarterly messages warning about the dangers of the low interest rate, calling for fiscal restraint and higher taxation to curtail the overall impact on the Danish economy.

Danish media has since dubbed the period as "the crises of the krone," the narrative being that Nationalbanken fought courageously against evil speculators. Internal investigations, however, revealed that two thirds of the demand for Danish currency had been driven by domestic market participants, among others Danish pension funds who were alarmed of the risk of losing a share of their investments in euros. This shows that even the Danes themselves lost confidence in Nationalbanken. 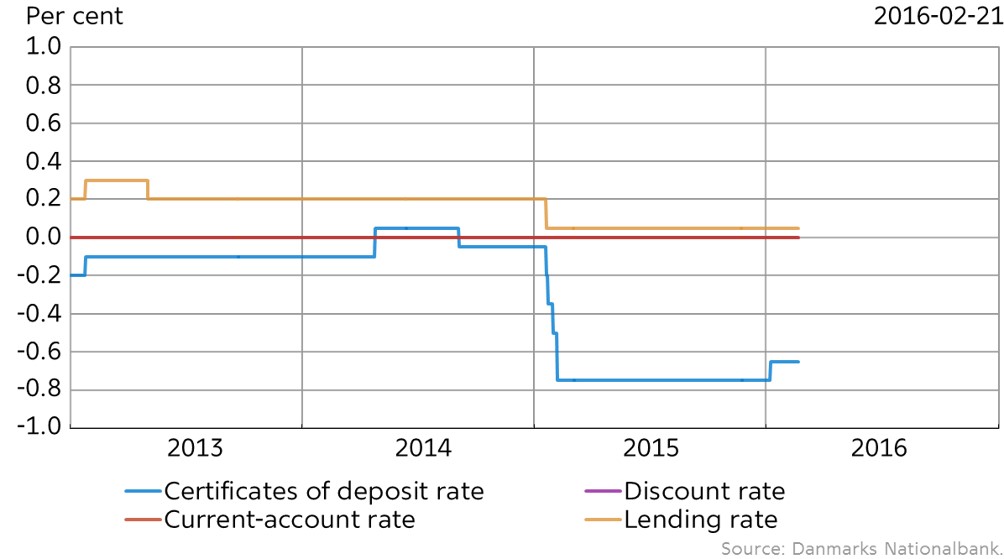 The head of Nationalbanken, Lars Rohde, at his speech 25th of March revealed the reactionary stance taken by Nationalbanken. It did not even attempt to drive the expectations of the market in light of the unusual events during January 2015. Thus losses which could have been prevented by more prudent intervention by Nationalbanken — such as a larger initial rate cut — were instead amplified by the bank's use of the printing press.

This reminds me of what Hayek wrote in his 1976 "Choice in Currency":

It seems to me that if we could prevent governments from meddling with money, we would do more good than any government has ever done in this regard. 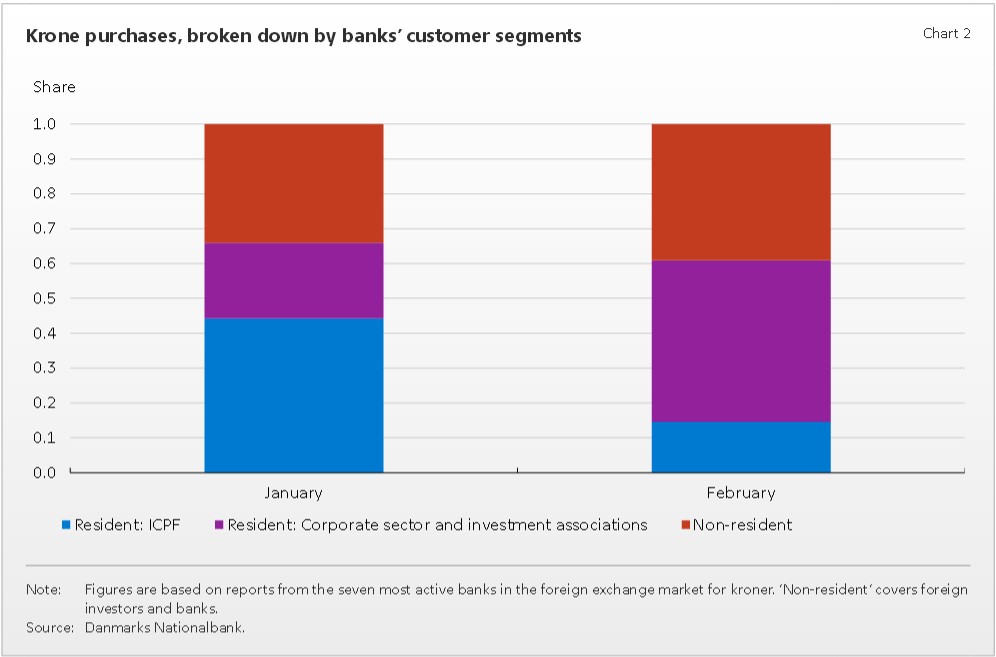 This episode is another example why governments and central banks do not act as they are alleged to do — their bureaucratic task was that of stabilizing the business cycle. Instead the recent actions of Nationalbanken caused greater fluctuations rather than suppressing them.

Uffe Merrild has a master of science in electronics engineering from Aalborg University in Denmark. He has also written articles for the Danish newspaper Borsen.