The Absurdity of Negative Interest Rates

What we can’t forget is that the real rate of interest can never be negative. The real, or natural, rate of interest is a function of the preference for present goods over future goods. A bird in the hand is worth two in the bush, in other words. A negative natural rate of interest would mean that someone prefers less in the future to more in the present. Given the choice between $20 today and $10 tomorrow, you would prefer the $10 tomorrow. That is a complete absurdity that would never happen in reality. But when you realize that most of the assumptions made by mainstream economists in creating their models are absurd, unrealistic, and nonsensical, you can understand at least a little why those practitioners of voodoo mathematics think that negative interest rates are a potential policy tool.

Since deposits are what allow banks to loan money in the first place, banks may have to start calling in loans in order to satisfy depositors. As the amount of loans outstanding shrinks, the bank’s income will decrease. It can make up for that by downsizing its operations, laying off staff and closing facilities. The combination of reduced income and laying off employees sends a negative signal to markets, indicating that the bank is unsound, which could lead to even further depositor withdrawals and, in the case of a publicly traded bank, a decline in its stock price. The bank’s preferred solution then might be to keep income up by widening the spread between deposit rates and borrowing rates by increasing the interest rate charged to borrowers. And thus dropping into negative interest rates on deposits can lead to a rise in interest rates for borrowers. 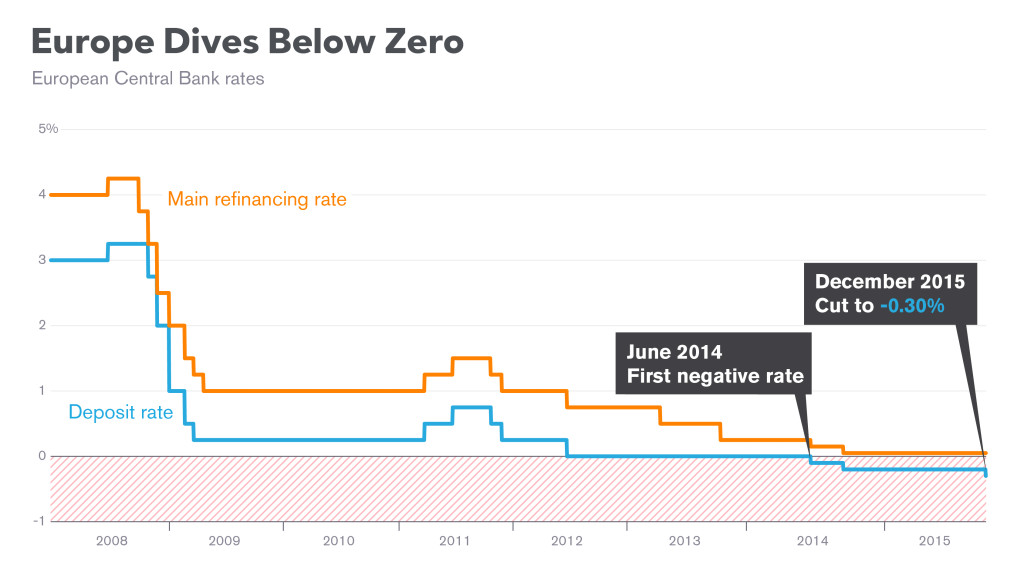 That’s the problem when central banks decide to fool around with something so vital as interest rates. Expecting market interest rates to move in linear fashion along with the rates set or targeted by central banks is futile. Human beings are not computers that react in predictable fashion, with a change in input A resulting in a predictable change in output B. Central bankers, despite both theory and practice condemning their failures, still have not learned that lesson. Central banks continue to play with fire, as their monetary manipulation constantly results in economic booms and busts. By pushing rates into negative territory, they are pouring gasoline on that fire. Negative rates that are low enough to encourage deposit withdrawals risk collapsing the entire banking system, built as it is on an inverted pyramid of fractional reserves. While this wouldn’t be the first time central bankers have collapsed an economy through their own ignorance, arrogance, or stupidity, the ramifications in a world far more developed, far more interconnected, and far less familiar with hardship could be catastrophic. It’s time to pull out the canes and get these jokers off the stage before they do even more damage than they already have.

Via the Carl Menger Center.

You’ll Be Shocked the Learn There's Corruption at the Fed

Petrou's new book on monetary policy details how the Fed's turn toward QE and ultralow interest rates have done wonders for billionaires while impoverishing millions of ordinary people.

Social Justice and the Emergence of Covid Tyranny

US Military Propaganda in Film, Sports, and TV: It's Everywhere

From the darkened cinema to the football field to the airport screening line, the US government inflated the actual threat of terrorism and the necessity of an aggressive military response.

In Shakespeare’s Rome, Cantor helps us to understand why Shakespeare was not only a great writer but a great political thinker as well, and that is no mean achievement.