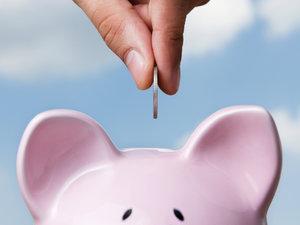 Savings has nothing to do with money. For instance, if a baker produces ten loaves of bread and consumes one loaf, his savings is nine loaves of bread. In other words, the “savings” in this case is the baker’s real income (his production of bread) minus the amount of bread that the baker consumed. The baker’s savings now permits him to secure other goods and services.

The introduction of money doesn’t alter what we have so far said. When a baker sells his bread for money to a shoemaker, he has supplied the shoemaker with his saved, unconsumed bread. The supplied bread sustains the shoemaker and allows him to continue making shoes. Note that the money received by the baker is fully backed by his unconsumed production of bread.

Yet without the medium of exchange, i.e., money, no market economy, and hence, the division of labor, could take place. Money enables the goods of one specialist to be exchanged for the goods of another specialist. In short, by means of money, people can channel real savings, which in turn permits the widening of the process of real wealth generation.

In other words, his unconsumed production of bread is now “stored,” so to speak, in money. There is, however, one proviso in all of this: that the flow of the production of goods and services continues unabated. This means that whenever a holder of money decides to exchange some money for goods, these goods are there for him.

Having Money Is Not the Same as Having Savings

Thus when a baker exchanges his money for apples, the baker has already paid for them with the bread produced and saved prior to this exchange.

Now what about the case where money is used to buy unprocessed material — is the unprocessed material real savings? The answer is no. The raw material must be processed and then converted into a piece of equipment, which in turn can be employed in the production of final goods and services that are ready for human consumption. In this sense, the buyer of unprocessed material transfers his claims on real savings to the seller of material in return for the prospect that the transformed material, some time in the future, will generate benefits far in excess of the cost incurred.

Once real savings are exchanged for money, the recipient of the money can exercise his demand for money in a variety of ways. This, however, will not have any effect on the existent pool of real savings.

An individual can exercise his demand for money either by holding it in his pocket, or in his house, or by placing it in the custody of a bank in a demand deposit, or even in a safe deposit box.

Also, whether he uses it immediately in exchange for other goods, or lends it out, or puts it under the mattress, it does not alter the given pool of real savings. Thus by putting the money under the mattress, an individual doesn’t engage in the act of saving. He is just exercising a demand for money. What individuals do with money cannot alter the fact that real savings are already funding a particular activity. Whether individuals decide to hold onto the money, or lend it out alters their demand for money, but this has nothing to do with savings.

Whenever an individual lends some of his money he in fact transfers his claims on real goods to a borrower. By lending money, the individual has in fact lowered the demand for it. Note that the act of lending money (i.e., the transferring of the claim) doesn’t alter the existent pool of real savings. Likewise, if the owner of money decides to buy a financial asset like a bond or a stock he simply transfers his claims on real savings to the seller of financial assets. No present real savings are affected as a result of these transactions.

How Does Money-Supply Expansion Affect Savings?

Now let us examine the effect of monetary expansion on the pool of real savings. Since the expanded money supply was never earned, goods and services therefore do not back it up, so to speak. When such money is exchanged for goods it, in fact, amounts to consumption that is not supported by production. Consequently a holder of honest money (i.e., an individual who has produced real wealth), that wants to exercise his claim over goods discovers that he cannot get back all the goods he previously produced and exchanged for money.

In short, he discovers that the purchasing power of his money has fallen — he has in fact been robbed by means of loose monetary policy. The printing of money therefore cannot result in more savings as suggested by mainstream economists, but rather to its redistribution. This, in the process, undermines wealth generators, thereby weakening over time the pool of real savings. So any so-called economic growth, in the framework of a loose monetary policy, can only be on account of a private sector that manages to grow the pool of real savings despite the negative effects of the loose money policy.

We can thus conclude that savings is not about money as such, but about final goods and services that support various individuals that are engaged in various stages of production. It is not money that funds economic activity but the flow of final consumer goods and services. The existence of money only facilitates the flow of the real stuff.