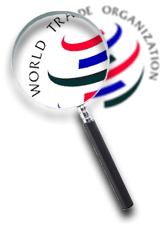 Unabashed unilateralism does prompt opposition, however, and Mr. Bush has found anything from skepticism to outright hostility across the Atlantic. Although the European Union (EU) is far from forging a common foreign policy, its extensive experience in managing the economic community's trade portfolio has enabled to mount an effective opposition to Washington's schemes, particularly at the World Trade Organisation (WTO).

More than just showcasing another aspect of a burgeoning economic, diplomatic and military rivalry, recent EU-U.S. trade spats underscore the mercantilist mindset that pervades the WTO.

On November 10, the WTO Appellate Body upheld an earlier ruling this past spring by a dispute settlement panel that deemed the Bush Administration's March 2002, imposition of prohibitive tariffs on selected steel imports to be in violation of the multilateral trading body's Safeguards Agreement.

Notwithstanding Washington's attempts during 2002 and early 2003 to stave off a WTO challenge through politically-targeted tariff exemptions on steel imports, the EU, along with another half dozen countries, prevailed in the dispute. Consequently, an aggrieved has been authorized to retaliate with tariff escalations of its own, should refuse to rescind the steel duties, which are not due to expire until March 2005. Pascal Lamy, EU trade commissioner, has indicated retribution could come as early as December 15.

Another commercial row between two of the world's economic superpowers involves a facet of America's tax code. Whereas EU member states abstain from taxing domestically based corporations' sales beyond Europe's borders, Americans do. To offset this competitive handicap, several administrations, including the current one, have fashioned legislative vehicles that permit American companies to shield portions of profits earned abroad from the Internal Revenue Service's clutches.

A blatant export subsidy, the Foreign Sales Corporation (FSC) and its successor, Extra-Territorial Income (ETI), have both been proscribed by WTO rulings in 1999 and January 2002 respectively1. Once again, talks of wielding the retaliation club, albeit in a gradual succession of blows, should a reluctant Congress refrain from abiding by the WTO dictate.

The dispute settlement system adopted during the Uruguay Round of the General Agreement on Tariffs and Trade (GATT) negotiations was implemented upon the debut of the WTO, successor of the GATT, in 1995.

A typical case arising under this regime is adjudicated approximately within a year-and-a-half, following consultation periods between the contending states, presentations of cases, and a ruling delivered by an appointed panel of experts, which is adopted by a Dispute Settlement Body, which is representative of the WTO membership. If need be, an Appellate Body comprised of three to seven nonpartisan international trade and law experts can affirm, revise or reject the lower tier finding.

Regarded by the WTO Secretariat as the "central pillar of the multilateral trading system for its contribution to the stability of the global economy," the dispute settlement system is designed to be rules-based, equitable and mutually acceptable. By incorporating a defined timeline and a structured process, the trade rectification procedure attempts to circumscribe member states' ability to flout global trade disciplines, conferring clout upon smaller countries. Indeed, during the GATT era, economic heavyweights like and the European Community could veto rulings against them.

Notwithstanding the WTO's supposed adherence to the "rule of law," it is a member-driven organization subject to the rule of consensus among all 146 participants: that is states. Therein the problem arises. Governments by their very nature are institutions beholden to the constituency that elevated them to power.

In democratic states, electoral expediency compels political parties to aggressively defend even the most pernicious trade-distorting policies, thereby circumscribing representatives' negotiating mandates. As a consequence, WTO member states perceive trade as a zero-sum game, as opposed to an act of mutually beneficial exchange.

The politicizing of commerce is evident in the tiffs between Washington and Brussels. Eyeing mid-term congressional elections in November 2002, and beset by an economy reeling from the puncture of the stock bubble of the late 1990s, Mr. Bush opted to play the protectionist card by invoking the aforementioned steel tariffs.

Consistent with economic theory, the duties have merely forestalled a thorough rationalization of a moribund industry saddled with escalating retiree healthcare and pension costs. Nonetheless, the tariffs are a hard sell for the White House to junk with steel-producing swing states , and high on the electoral wish list.

Even if Mr. Bush were to abide by the WTO ruling on steel, a decision which he has been ambivalent about, he will be able to keep the beneficiaries of his "America first" trade policy sweet by administrative machinations. Under considerable pressure from steel and lumber lobbies, the Commerce Department is mulling a change to its method of assessing anti-dumping duties in a manner that would further penalize foreign firms.4  Coupled with the WTO-defying Byrd Amendment, which disburses anti-dumping collections directly to domestic producers, the proposed move would solidify America's steel and lumber industries as two of the largest recipients of Bush's political payouts.

As for Brussels, it is prepared to administer tariffs spanning anywhere between eight and 30 percent on selected U.S. imports totaling $2.2 billion, the largest trade sanctions award in WTO history. Likewise the adverse ruling against America's FSC and ETI schemes could engender another $1 billion in sanctions by the EU over the next two years.

The EU's choice of products to subject to punitive tariffs is not devoid of political considerations: citrus fruits and orange juice, textiles, and wares from other politically sensitive locales figure prominently on Europe's retaliatory list.

The Independent adroitly summed up the transatlantic tit-for-tat, saying, "M. Lamy understands how to hurt the Americans: batter their icons. So there will be revanchist tariffs placed on jeans, on orange juice and on bowling alley equipment. The cheese-eating surrender monkeys have bitten back."5

Better yet, other journalistic sources report that during a recent gathering, President Bush was said to have asked the president of the European Commission, Romano Prodi, "Why are you attacking my family?"

Although the president's query may prompt a smirk, it is a crucial question that serves to accentuate a mercantilist flaw within the WTO dispute settlement system.

The remedy for a violation of global trade rules entails retaliation, that is, the aggrieved party may penalize the transgressor in the same manner it suffered depredations: by resorting to protectionist measures itself.

Compensation by the state found to be flouting WTO agreements, via rescinding trade barriers in domestic markets of the complainant state's choice, would be trade promoting and mutually beneficial. By contrast, retaliation through heightened sanctions enacted by the "winning" litigant merely serves to entrench hostility, attenuate market access and foster further interventionism.

Under the current WTO dispute settlement system, compliance with global trade rules is left to the discretion and implementation of the offending country. The adequacy of such reforms can be evaluated by a separate dispute settlement panel, which itself is permitted to formulate specific, though nonbinding, rectification suggestions.

Because the offending state is not obliged to do anything more than unilaterally determine how it will dispense with its protectionist measures, complainant states have no other recourse, outside bilateral negotiations, than the mutually destructive and mercantilist option of retaliation. America's trade representative, Robert Zoellick, once likened the EU's threat to make good on the up to $4 billion of trade sanctions authorized by the WTO to detonating a "nuclear device" in the world trade system.6

Similarly, standard remedies that arise from dispute settlement panels systematically preclude any restitution to individual firms that have suffered financial hardship as a result of WTO-determined trade infractions. This means foreign enterprises that have been adversely affected by illicit tariffs or spurious anti-dumping actions can rarely obtain recompense from the malignant state that utilized those measures.

Despite several GATT-era rulings endorsing direct monetary compensation to foreign businesses, developed countries have almost always ruled the option out, enabling them to retain the ill-gotten gains and safeguard domestic firms from having to reimburse the receipts accrued from anti-dumping duties or government subsidies.7

In the international trading system, professions of fealty to the classical liberal principles of free trade merely shroud a mercantilist agenda.

The Status Quo of State-Managed Trade

What then does this admittedly brief examination of the WTO dispute settlement system portend for the transatlantic tussles over steel and tax treatment?

If President Bush accedes to the ruling on steel by scrapping the safeguard tariffs, he at least has the prospect of mollifying domestic steel firms by implementing a more robust, in terms of domestic protection capabilities, anti-dumping regime to employ in tandem with the archetype of corporate welfare, the Byrd Amendment. Consequently, Bush retains producer support and, by implication, pivotal electoral swing states.

Unfortunately, the losers in this affair are efficient foreign steel firms, domestic enterprises that utilize steel in production processes, and ultimately American consumers.

Worse yet, if Mr. Bush's penchant for unilateralism holds on the steel issue and/or an insular U.S. Congress refuses to scrap the FSC/ETI, the EU will likely enact retaliatory measures, thereby harming ordinary producers and consumers on both sides of the Atlantic who have nothing to do with the jostling between economic superpowers and their favored clients.

What is clear is that the business-government condominium profits in either case, reinforcing the pervasive notion in mainstream academia, media and political circles that international trade is conducted between states, not individuals. One needs to do nothing more than peruse a broadsheet or an undergraduate economics textbook to certify the validity of this statement.

As for the WTO, in reality a collusive organization created by states to manage, rather than free, commerce, it will continued to be regarded as the institution charged with preventing the world economy from descending into fratricidal confrontations between competing currency and trading blocs, facets of the turbulent 1930s.

But with the EU, Mercosur, NAFTA and other regional trading arrangements all vying for supremacy, and mercantilism entrenched at the heart of the dispute settlement system, one can say the WTO is anything but committed to unfettered trade between individuals across national borders.

Grant Nülle, MBA, is a former legislative staffer, finance director, and budget analyst with extensive experience in fiscal and economic policy. He is currently working on a PhD in mineral and energy economics in Colorado.