GET NEWS AND ARTICLES IN YOUR INBOXPrint
A
A
Home | Mises Library | The Worldly Ascetic: San Bernardino of Siena 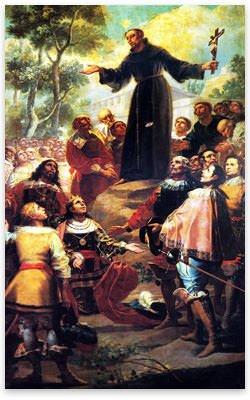 The great mind, and the great systematizer, of scholastic economics was a paradox among paradoxes: a strict and ascetic Franciscan saint living and writing in the midst of the sophisticated capitalist world of early fifteenth century Tuscany. While St. Thomas Aquinas was the systematizer of the entire range of intellectual endeavor, his economic insights were scattered in fragments throughout his theological writings. San Bernardino of Siena (1380–1444) was the first theologian after Olivi to write an entire work systematically devoted to scholastic economics. Much of this advanced thought was contributed by San Bernardino himself, and the highly advanced subjective utility theory was cribbed word for word from the Franciscan heretic of two centuries earlier: Pierre de Jean Olivi.

San Bernardino's book, written as a set of Latin sermons, was entitled On Contracts and Usury, and was composed during the years 1431–1433. The treatise began, quite logically, with the institution and justification of the system of private property, proceeded to the system and the ethics of trade, and continued to discuss the determination of value and price on the market. In ended with a lengthy discussion of the tangled usury question.

San Bernardino's chapter on private property was nothing remarkable. Property was considered artificial rather than natural, but still vital for an efficient economic order. One of Bernardino's great contributions, however, was the fullest and most cogent discussion yet penned on the functions of the business entrepreneur. In the first place, the merchant was given an even cleaner bill of health than had been given by Aquinas. Sensibly, and in contrast to early doctrines, San Bernardino pointed out that trade, like all other occupations, could be practiced either licitly or unlawfully. All callings, including that of a bishop, provide occasions for sin; these are scarcely limited to trade. More specifically, merchants can perform several kinds of useful service: transporting commodities from surplus to scarce regions and countries; preserving and storing goods to be available when the consumers want them; and, as craftsmen or industrial entrepreneurs, transforming raw materials into finished products. In short, the businessman can perform the useful social function of transporting, distributing, or manufacturing goods.

In his justification of trade, San Bernardino finally managed to rehabilitate the lowly retailer, who had been scorned ever since ancient Greece. Importers and wholesalers, Bernardino pointed out, buy in large quantities and then break bulk by selling by the bale or load to retailers, who in turn sell in minute quantities to consumers.

Realistically, Bernardino did not condemn profits; on the contrary, profits were a legitimate return to the entrepreneur for his labor, expenses and the risks that he undertakes.

San Bernardino then goes into his trenchant analysis of the functions of the entrepreneur. Managerial ability, he realized, is a rare combination of competence and efficiency, and therefore commands a large return. San Bernardino lists four necessary qualifications for the successful entrepreneur: efficiency or diligence (industria), responsibility (solicitudo), labor (labores), and assumption of risks (pericula). Efficiency for Bernardino meant being well-informed about prices, costs, and qualities of the product, and being "subtle" in assessing risks and profit opportunities, which, Bernardino shrewdly observed, "indeed very few are capable of doing." Responsibility meant being attentive to detail and also keeping good accounts, a necessary item in business. Trouble, toil, and even personal hardships are also often essential. For all these reasons, and for the risk incurred, the businessman properly earns enough on successful investments to keep him in business and compensate him for all his hardships.

"One can only stand in awe at the fury of unreason in which this truly great thinker indulged himself on the usury issue."

On determination of value, San Bernardino continued in the mainstream scholastic tradition, with value and the just price being determined by the common estimation of the market. Price will fluctuate in accordance with supply, rising if supply is scarce and falling if abundant. Bernardino also has a penetrating discussion of the influence of cost. Cost of labor, skill and risk do not affect price directly, but will affect the supply of a commodity, and ceteris paribus (other things being equal — a phrase used by San Bernardino) things requiring greater effort or ingenuity to produce will be more expensive and command a higher price. This insight prefigures the Jevons/Austrian analysis of supply and cost over five centuries later.

As we have seen, San Bernardino took over word for word the remarkable subjective utility theory of value published (and previously neglected) by the Franciscan Pierre de Jean Olivi. Bernardino's significant contribution to the theory of the just-as-market price was to apply it to the "just wage." Wages are the price of labor services, Bernardino pointed out, and therefore the just, or market wage will be determined by the demand for labor and the available supply of labor on the market. Wage inequality is a function of differences of skill, ability and training. An architect is paid more than a ditch-digger, Bernardino explained, because the former's job requires more intelligence, ability and training, so that fewer men will qualify for the task. Skilled workers are scarcer than unskilled, so that the former will command a higher wage.

In a sophisticated discussion of foreign exchange, Bernardino put his imprimatur on transactions that were the dominant way in which hidden interest was charged for a credit transaction. Here, Bernardino followed the latitudinarian view of his master Alexander Lombard. Generally, exchange transactions were conversions of currencies and not loans. Furthermore, usury was only a certain and riskless interest on a loan; foreign exchange rates fluctuated and were therefore unpredictable. This was technically true, but generally lenders received interest on exchange transactions, since the money market was structured to favor the lender in this way. Bernardino also pointed out that conversion of currencies was necessary because of the great diversity of currencies, and because the coinage of one country was not acceptable elsewhere. The money-exchangers, therefore, performed a useful function by enabling foreign trade, "which is essential to the support of human life," and by transferring funds from one country to another without requiring the actual shipping of specie.

San Bernardino of Siena was a fascinating and paradoxical combination of brilliant, knowledgeable, and appreciative analyst of the capitalist market of his day, and an emaciated ascetic saint fulminating against worldly evils and business practices. Bernardino was born in 1380 to a high official of Siena; his father, Albertollo degli Albizzeschi, was governor of the town of Massa for the Republic of Siena. Bernardino's mother also belonged to a prominent local family. Joining the strictly ascetic order of the Observant Franciscans, Bernardino soon became noted as a persuasive and highly popular traveling orator, preaching throughout northern and central Italy. In the 1430s, Bernardino was appointed vicar general of the Observant Franciscans. Three times in his lifetime, San Bernardino was offered bishoprics (in Siena, Urbino and Ferrara), and each time he refused this honor, since he would have had to give up his preaching.

"In the course of lengthy arguing against hidden usury in various forms of contracts, the brilliant mind of San Bernardino stumbles, for one of the first times in history, upon what later would be called 'time-preference'."

Some of Bernardino's antiworldly preaching dwelt on problems of personal morality; thus, he deplored the practice of traveling merchants staying away from home for long periods, and then defiling themselves by living in carnal sin or even sodomy, which the saint habitually referred to as "filth." Indeed, in his youth, Bernardino punched a man who had made homosexual overtures.

But Bernardino's main contradiction between sophisticated analyst of business and denouncer of business practice lay in his fulmination against usury. Surrounded by the home of usury in Tuscany, San Bernardino, in common with so many scholastics, found that realism stopped short at the usury door. On the usury question, the saint's brilliant analysis and benign view of the free market failed him, and he fulminated almost in a frenzy: usury was a vile infection, permeating business and social life. Whereas other scholastics had taken seriously the objection that Church and society depended upon usury, Bernardino did not care. No: it could not be. All those holding that usury was economically necessary were committing the sin of blasphemy, since they would therefore be saying that God had bound them to an impossible course of action. Abolish the charge of interest, Bernardino opined, and people would then lend freely and gratuitously; and besides far too much is being borrowed now, for frivolous and vicious purposes. Usury, the saint thundered, destroys charity; it is a contagious disease; it stains the souls of all in society; it concentrates all the money of the city into a few hands or drives it out of the country; and what is more, it justly brings the wrath of God upon the city, and invites the Four Horsemen of the Apocalypse.

One can only stand in awe at the fury of unreason in which this truly great thinker indulged himself on the usury issue. Ranting about the usurer daring to "sell time," Bernardino went further than his predecessors in insisting that only Jesus Christ "knows the time and the hour. If therefore it is not ours to know the time, much less is it ours to sell it." Is keeping watches and clocks therefore a mortal sin? Bernardino winds up in a fit of almost hysterical frenzy at the hapless usurer:

And yet, despite all this, San Bernardino added his great weight to the concept that would eventually scuttle the usury prohibition: lucrum cessans. Following Hostiensis and a minority of fourteenth century scholastics, Bernardino admits lucrum cessans: it was all right to charge interest on a loan which would be the return sacrificed — the opportunity foregone — for a legitimate investment. It is true that Bernardino, like his predecessors, limited lucrum cessans strictly to a charitable loan, and refused to apply it to professional money-lenders. But he made an important analytic advance by explaining that lucrum cessans is legitimate because in that situation money is not simply barren money but "capital." As Bernardino put it, when a businessman lends from balances which would have gone into commercial investment, he "gives not money in its simple character, but he also gives his capital." More fully, he writes that money then "has not only the character of mere money or a mere thing, but also beyond this, a certain seminal character of something profitable, which we commonly call capital. Therefore, not only must its simple value be returned, but a super-added value as well."

In short, when money functions as capital, it is no longer barren or sterile; as capital it deserves to command a profit.

There is something more. In the course of lengthy arguing against hidden usury in various forms of contracts, the brilliant mind of San Bernardino stumbles, for one of the first times in history, upon what later would be called "time-preference": that people prefer present goods to future goods (i.e. the present prospect of goods in the future). But he failed to recognize its importance, and dismissed the point. It was left to the late eighteenth century Frenchman Turgot and then to the great Austrian economist Eugen von Böhm-Bawerk to discover the principle in the 1880s and hence finally solve the age-old problem of explaining and justifying the existence and height of the rate of interest.