A World of Malice 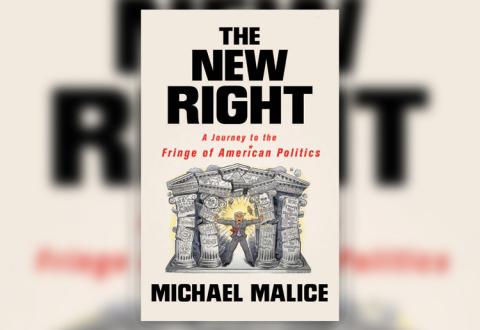 The New Right: A Journey to the Fringe of American Politics
by Michael Malice
All Points Books/St. Martin's Press 2019
307 pages

Conservatism, Michael Malice famously remarks, is progressivism driving the speed limit. Malice’s latest book, aptly titled The New Right: A Journey to the Fringe of American Politics, documents a movement of sorts to change this.

Malice is a podcaster, ghostwriter of celebrity books, and author of the truly unique Dear Reader: The Unauthorized Autobiography of Kim Jung Il. He is perhaps best known, however, as a highly skilled Twitter provocateur. His vantage point is from the foxholes of social media, but he is not afraid to go out and meet the subjects of his book in the physical world.

A definitive feature of the New Right is its antipathy for Conservatism Inc., the safe, comfortable form of DC Beltway think tankdom and punditry which never seems to conserve anything but its own jobs and funding. If conservatives won’t fight, much less win, they should be replaced by something new. Thus the New Right emerges in the 21st century as a response to the abject failure of conservatives to meaningfully oppose the progressive juggernaut, either ideologically or tactically. Baby Boomer Reagan nostalgia is over and done as a political force, replaced by millennial MAGA guerilla warfare and fully stripped of useless intellectual pretension. Progressivism has its foot on the accelerator, and standing athwart history yelling “slow down” has not worked.

National Review’s departed founder William F. Buckley, Jr., an avatar of this old conservative establishment, is a particular target of the New Right’s ire. Malice finds the CIA-connected Buckley not only grossly hypocritical and disloyal in his purges of dissidents, but also ultimately ineffectual: Buckley embarrassingly failed to conserve even his own son Christopher’s conservatism, the latter cheerfully announcing in 2008 he would vote for Barack Obama. Buckley’s craven search for respectability from the Left yielded nothing, a lesson not lost on Malice and the New Right.

Contrast Buckley with the late Murray Rothbard, treated more favorably in the book. Our readers know Rothbard not only as an architect of modern libertarianism, but also as someone deeply influenced by the “Old Right.” Malice considers Rothbard a Godfather to the modern conservative uprising, at least tangentially, owing to Rothbard’s anti-establishment, anti-egalitarian, and populist views. Yet while the Old Right and the New Right similarly manifest as “diverse and loose coalitions” of groups against the Left, the comparison seems to end there: Rothbard’s stable of influences (Nock, Garrett, Taft) possessed a far more coherent ideology apart from any reactionary opposition.

Still, Malice’s inclusion of Rothbard as a modern influence is welcome. And it raises a question: who today is better known among people under 30, Buckley or Rothbard? My bet is on Rothbard, who is still producing “new” books decades after his death and finding far wider reception for his works in the digital age.

Happily, Malice does not dwell too much on the wildly overhyped “alt-Right,” presenting it only as a subset of his larger topic. The alt-Right is mostly a bogeyman for the Left and Never Trump conservatives, and a phony whipping boy for a credulous mainstream press. It has no institutions, no money, no benefactors or think tanks, and no political power. It consists mostly of a few thousand outsized voices loudly using social media platforms. The alt-Right didn’t elect Donald Trump; a few hundred thousand angry Baby Boomers in a handful of swing states did—many of whom voted for Barack Obama at least once. Malice does not add to alt-Right mythology here.

Since the Right is defined by its reactionary opposition to the Left’s relentless advances, the book by necessity is also about today’s “evangelical” Left. Malice, like the New Right itself, is at his best when skewering the Left’s “Cathedral,” demonstrated by the religious zeal shown for pronouncements and opinions handed down from on high by priests in academia and media:

For the evangelical left, however, the world is defined by what is acceptable, and everything outside this acceptability is wrong and bad. The scales are tipped heavily against anything outside their norms…There are approved parameters, and anything else is simply wrong, as ‘everyone’ (i.e. progressives they associate with and approve of) knows.

Of course those norms and parameters change quickly, often without warning, and thus the Cathedral often savages heretics as readily as conservatives. The Left’s religiosity, complete with canonical texts and ever-narrowing range of faith based opinions, is a key point of Malice’s argument: debate is passé on the Left, if not verboten. The science is settled, and to hell with those outside the faith. Convert or be cast out.

An important article of faith for the Cathedral is democracy, at least the kind that does not elect Trump or approve Brexit. Malice shows particular skill in a chapter attacking democratic pretenses when he considers the case of Barack Obama’s position on capital gains taxes (a position shared by many academic philosophers). In the former president’s view, such taxes are required on grounds of fairness and equality regardless of whether tax revenue actually increases and regardless of whether programs funded by such taxes actually hurt recipients. Outcomes are irrelevant in the Cathedral, and the author pulls no punches explaining why:

There are people who explicitly and genuinely would prefer to see everyone worse off. It is very rare to see a conservative acknowledge the possibility that the left intentionally prefers what’s worse for everyone in service to some higher ideal.

In other words, the Cathedral demands tithes as the price of democracy—and far more than 10%. After all, you voted for it. But what if you did not vote for it, in fact? What if you are not a politician or bureaucrat with your hands on the wheel? Who actually carries out the actions decided upon, and who watches over the administrators? How far does this democratic consensus really go?  Malice is ready with an explanation to these questions, channeling Rothbard and de Jouvenel: even in the most direct form of democracy, like a town hall, time and space are limited. Someone must set the agenda. And “an entity that sets the agenda for discussion, recognizes individual speakers, and frames questions for everyone else is an elite. Elitist rule is inevitable.” This is a nice puncturing of democracy and the “consent” argument, and a high point in the book.

If politicians and professors are the Cathedral’s clergy, media figures are its enforcers. Malice identifies one classic techniques as the “demand for disavowal,” something familiar to many of us. This is a version of guilt by association, and varies only in how many degrees of separation from the Deplorables are required to remain in good standing. The book describes one social media figure popular with the new Right who finds himself interviewed by the decidedly analog-era TV show 60 Minutes. His twitter feed and videos apparently attract the “wrong” kind of followers, and he is asked on air to denounce them— not to show decency or a change of heart, but to show conformity. Or, as Malice puts it, to “genuflect before the demands of progressivism.”

The book contains transgressions, of course. An early chapter finds Malice astray in his descriptions of Mises, Austrian economics generally, and Rothbard’s contributions to the field. Mises did not “eschew” economic calculation so much as he made the definitive case against the socialist version of it. He was not overly theoretical or philosophical, contra Malice’s implication, but rather rooted in theory and axioms as the starting point for a deductive process. Praxeology, then, is not the “basis of human activity” as Malice alleges but rather the science of studying human action.

Similarly, Rothbard’s Man, Economy, and State was not a rehash of Human Action as per Malice, but rather a significant advancement of Austrian theory in several areas. Rothbard’s references to social utility in his treatise are couched in economic terms. But utilitarianism did not drive Rothbard’s economics, and Malice ignores the construction of a natural law argument for laissez-faire in The Ethics of Liberty. One senses in the book an impulse to portray Rothbard as a radical, which he was, but not as a tremendously accomplished intellectual and seminal thinker, which he surely was as well. Rothbard was neither a misanthrope nor a gadfly, and random quotes from the 1960s to demonstrate intransigence do not serve the author well.

But these transgressions likely stem from Malice’s relatively brief readings of these thinkers, and from his particular focus on Rothbard as a political theorist rather than an economist. Malice is not required to display deep familiarity with either man’s oeuvre before commenting.

There are other nits to pick. Malice seems not to understand Ron Paul, whose campaigns attempted to build a real movement founded on ideological moorings rather than tactical or electoral considerations—more Barry Goldwater than Pat Buchanan or Ross Perot. Malice also refers, several times, to a mythical WASP power structure which has not existed in America for at least 50 years. He spends too much time discussing current New Right personalities, memes, and platforms; these will appear dated in just a few years, limiting the book’s staying power. Whether this was at the behest of his publisher we do not guess. And he seems overly cautious in separating himself from his subjects, making sure the reader knows he is an anarchist rather than a conservative or actual member of the New Right. But surely “everyone knows” even speaking to the wrong people for research purposes, much less commiserating with them as Malice sometimes does, can only result in a demand for disavowal.

If the author considers these criticisms pedantic, in keeping with the spirit of the New Right, we understand. Yet if the rebels hope to survive and supplant Conservatism, Inc., they should take their cues from the Old Right and strive for intellectual cohesion with strong antiwar foundations. In the age of the amoral, relentless Cathedral, tactics and foot soldiers are important. But so are intellectual supply lines.