A Wonderful World of Parrillas 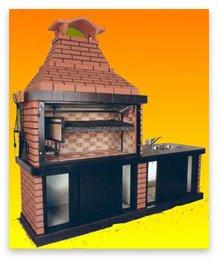 This is a story about a barbecue. In the South Florida back yard of a friend who had invited me over for dinner, I saw a most unusual barbecue, but what I learned about it from its owner informed me about a lot more than barbecues.

It hinted at the incredible power of freedom — the freedom of people to trade with each other, over distances and across borders. A freedom that has always throughout my life and the life of everyone else alive today been throttled, bled, and interfered with by government, for government. If it hadn't been, this would be no story at all. It would be everyday routine.

To the casual observer, it looked like a particularly artful pile of bricks and mortar, and since it was where dinner was being made, it was a center of attention. As I inspected this particular edifice I noted that it just wasn't quite like the rectilinear brick constructions I was accustomed to seeing in the United States. It had a chimney that sloped inward toward the top on all four sides, and atop the chimney, a cover (I'm sure there's an architectural word for this) that was curved instead of flat. The fire wasn't under the meat, but rather, was off to one side. The meat was heated primarily by the glowing coals that cascaded out from under the burning wood into a receptacle under the meat.

I recalled that my host was from Argentina, where they have not only a lot of meat to barbecue, but their own world-famous style of barbecue known as parrilla. For my part, I've never been within three thousand miles of Argentina, and don't even speak Spanish. So I gingerly approached my host, who was managing the extensive array of grilling meats called for by the large array of guests he had invited to this occasion. I said something like, "Say, this is an unusual barbecue. It wouldn't be a parrilla, would it?"

My host, who somehow sensed the intercultural leap I was attempting, approvingly replied, "Yes, that's exactly what it is." Now, to me, a brick barbecue is a thing that, like a house, is built in the place where you find it, by bricklayers and other such craftsmen. And because such construction materials are heavy and more or less generic, they come from nearby, which for bricks in South Florida means Georgia.

So, noting the extensive highly authentic detail, I ignorantly voiced my assumptions by asking my sweating host and chef whether he had engaged a local bricklayer and somehow instructed him to the nth detail in the construction of an authentic parrilla. I further asked whether this construction was reconciled with local construction codes, which, because they contemplated no such thing, might have prohibited any such thing.

"Not at all," replied my patient parrillero. "I just ordered it from a store downtown. They sent out a crew with a truck and had the thing up and running like you see it in about two hours."

Since I was already drooling in contemplation of what looked as though it just had to be my steak, the sudden slackening of my jaw at that revelation almost caused me considerable embarrassment. Noting my wonderment, he continued, "It looks like brick, doesn't it? Well, it isn't — it's cast concrete painted to look like brick. The whole thing comes in pieces in a big box, and they assemble it right where you tell them to. And you can take it back apart to move it, too."

I was so taken aback by the notion that a large, highly functional installation of this kind could be had in prefabricated form that I hardly noticed when he slid that gorgeous churrasco onto my plate. All I could manage was the query, "Well, it's remarkable enough that the thing is assembled out of a box, but I can't get over how authentic it seems to be down to every detail."

At this point, my host broke into an indulgent smile. "Well, Joe, where do you think this parrilla was made?" My hopelessly out-of-date assumption about Georgia (they do barbecue in Georgia, after all) almost escaped my lips when the awesome truth began to dawn on me.

"You don't mean … " and the chef completed my incredulous thought as he put another of those beautifully grilled steaks on his own plate: Argentina, the land of sovereign debt default and the plummeting peso, home of one of the most spectacular currency implosions of modern history, packs up concrete barbecues in boxes and ships them to America where people who've never even seen a gaucho can use them in their back yards to cook up churrasco or even plain old hot dogs and hamburgers, and all, as it turns out, at a fraction of what a brick barbecue used to cost.

As it began to sink in that I was standing next to a "brick" barbecue imported from the far end of the next continent, I contemplated, shouldn't things always have been this way? One way and another, through tariffs, exchange controls, or regulations on international shipping, this kind of thing has been prevented throughout most of my now-long life, but finally, I have lived to see this much of freedom come to pass.

But I still couldn't accept that multifarious, never-sleeping Leviathan could have left this benign enterprise completely untouched. "Didn't you have to get a permit for this construction project?" I asked.

My host chuckled as he prompted me to sit down with him and tuck into our still-sizzling steaks. "You don't need a permit for a prefabricated barbecue. How's anybody going to catch you building it anyway, when it only takes two hours to complete?"

Then he told me a story that reminded me of the Three Little Pigs, each of whom built his house according to his own lights. He had two friends, also Argentine emigrés, who had built their own parillas from local materials before the prefabricated imports became available. One of them, he said, did the work under cover while the other took the high road and got permits and submitted to inspections at various points during the work.

But at the end of the day, everybody had an attractive, functional parrilla. Everybody, that is, but the upright soul who did his in accordance with all local laws and regulations.

He never was able to get his parrilla to work right.

N. Joseph Potts studies economics at his home in South Florida. Send him mail. See his archive. Comment on the blog.