GET NEWS AND ARTICLES IN YOUR INBOXPrint
A
A
Home | Mises Library | Why Vote? 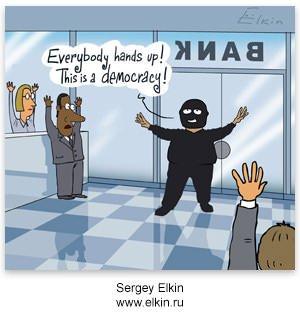 [An MP3 audio file of this article, narrated by Steven Ng, is available for download.]

In my recent "How to Win an Election," I made the point that "your vote doesn't matter." Given some of the responses to this statement, I would like to provide further explanation.

Consider what it means to say "your vote doesn't matter." Your vote does matter if it affects the outcome of the election in question. How this could happen depends on the number of votes tallied. If there is an even number of voters in an election, your vote matters only if it creates a tie and your candidate goes on to win the election. If you didn't vote, your candidate would have lost by one vote. In such a case, because of your vote, your candidate's odds of winning increased from 0 percent to roughly 50 percent.

On the other hand, if there are an odd number of voters, your vote matters if it breaks the tie that would have occurred in the absence of your vote. In such a case your candidate's odds of winning increase from about 50 percent to 100 percent.[1] The chance of either one of these occurrences depends on the number of voters in the election, among other issues. Adding this all up, the odds of your vote making a difference are approximately 1/N, where N is the number of voters in the election.[2] According to this estimate, in an election with 100 million voters, the chance of a single vote affecting the outcome of the election would be about one millionth of one percent.

In US presidential elections, matters are complicated by our Electoral College. However, a study of the 2008 election, an election with about 130 million voters, shows that this 1/N estimate seems to hold roughly within an order of magnitude. Immediately prior to the 2008 presidential election, Andrew Gelman, Nate Silver, and Aaron Edlin (GSE), projected the odds of a single vote affecting that election.[3] Basing their forecasts on opinion polls immediately before the 2008 election, GSE estimated a one in 60 million chance of a randomly selected voter affecting the election. In their state-by-state forecasts, a single vote in New Mexico, New Hampshire, Colorado, or Virginia was most likely to matter, with an approximate one in 10 million chance of one vote in those states making a difference in the election. In Alaska, Hawaii, and the District of Columbia "the probability of a single vote being decisive is nearly zero."

Analysts who consider this issue often compare the chances of a vote making a difference in a national election to the odds of dying while driving on Election Day: it is more likely that you will die in a fatal accident than that your vote will be decisive. A 2008 study, published in the Journal of the American Medical Association, confirms this conclusion. Donald Redelmeier and Robert Tibshirani examined the traffic-related deaths during polling hours on Election Days compared to the number of deaths on the two Tuesdays before and after the election for the last 30 years. They found the Election Day average of 158 deaths to be 18 percent higher than the average death rate on the other days.[4]

It appears that a driver is more likely to die during polling hours than at other times. Whether that is the case or not, thousands of people have died while driving during polling times for presidential elections, but no single vote has ever determined one of those elections.

A 2007 survey of Ferris State University (I teach at Ferris State) students shows that 79 percent of the students "felt that their vote makes a difference." It seems to me that the students are being influenced by the "you should vote" drumbeat on campus. I assume that students are providing politically correct answers to the survey, even though they know that their votes do not make a difference. Informal surveys in my classes indicate that a low percentage of my students believe that their vote is likely to affect an election or the government's policies. If it's true that 79 percent of my university's students believe that their vote could affect a presidential election, maybe Ferris State should consider restructuring its general education program.

Not only does a single vote not make a difference, in presidential elections, it seems that all of the votes in the state of Michigan do not matter. If a single individual could control all of the voters in Michigan and if all of the Michigan voters voted for John McCain, Barack Obama would still have won the 2008 election. If all Michigan voters had voted for John Kerry in 2004 and for Al Gore in 2000, George Bush would still have won both of those elections. In fact, if all Michigan voters had voted for the losing presidential candidate in every election since 1900, this would not have changed anything. The same candidates would have won every election. It apparently doesn't matter whether Michigan voters support the Democrat, the Republican, or Shaq. Of course, Michigan's voters as a group could affect a presidential election, it just hasn't happened in the last century.

Looking at the 28 presidential elections from 1900 to 2008 reveals that only rarely does a single state's vote affect the election. In 23 of those 28 elections (82 percent of the time) no single state's total vote count mattered. In those 23 elections, if a person could control every single vote in any one state, even one of the large states, that person could not change the election's outcome. There have been only five elections during that time in which one state's votes affected the election. In 1916, ten states made a difference (by "made a difference," I mean that if a majority of the state's voters supported the losing candidate, the election outcome would have been different).[5]

"It apparently doesn't matter whether Michigan voters support the Democrat, the Republican, or Shaq."

New York's vote made a difference in the 1960 Kennedy-Nixon election and the 1976 Carter-Ford race; the 30 states that went for Bush in the famous 2000 Bush-Gore election all made a difference; and Ohio, Florida, and Texas all made a difference in the 2004 Bush-Kerry election. Of the total of 1,362 times that states have participated in the 28 elections since 1900, a single state's votes have affected the election outcome 45 times, or only 3.3 percent of the time. For voters in 18 states, since 1900, their state as a whole has not mattered in any presidential election.[6]

This argument is an example of the fallacy of division. This fallacy is committed when one asserts that what is true of a whole must also be true of a part of that whole. For instance, the statement "the amount of oil production in the world has a significant effect on gasoline prices, therefore a single small oil company's level of production has a significant effect on gasoline prices." Clearly, this statement is false. Claiming that many votes matter, therefore each individual vote matters is equally fallacious.

Another common claim in favor of voting goes something like this: one should vote because "if you don't vote you can't complain." This is wrong on a couple of levels.

If this statement is taken literally, it's false. You can complain, even if you don't vote. Nobody ever asks me "did you vote?" when I gripe about the government. We have free rein to complain. There is no ethical or legal proscription against complaining simply because one failed to vote.

Maybe when one says that "if you don't vote you can't complain" they mean to say "only those who vote are justified in complaining. You are allowed to complain, but you shouldn't, if you didn't vote." It seems to me that the opposite may be the case. Voting reduces your right to complain. If you voted, then you support a corrupt system. You're partially to blame for the debacle that is our federal government. Our elected officials are corrupt because voters vote for immoral political leaders (as I explained here). If anything, nonvoters have a greater right to complain than do the voters.

Let's get to the main issue. One case in favor of voting is the argument that voting is a moral imperative, that it's your civic duty. Those who take this position believe that individuals are morally compelled to vote. According to this argument, even if your vote doesn't matter, you should vote. There are various versions of this argument, but oftentimes the argument does not go beyond the mere assertion that voting is a duty.

I hear this claim at my university. Around election time, in faculty meetings, I have repeatedly heard "remember to tell your students to vote." No reason is ever provided as to why I should tell them to vote or why students should vote; it's simply taken as accepted wisdom.

This "moral imperative" argument is not convincing. The argument that voting is a moral imperative depends on, among other issues, whether or not democracy is a morally acceptable method of collective decision making. One problem here is that the aim of the collective decision is generally immoral. Most voters vote in favor of government predations on our property. Voters are willing to vote themselves other people's wealth. This is morally unacceptable. The fact that some group somewhere has voted does not justify the theft of property.

Suppose someone, let's say Butch Cassidy, argued that bank robbery is ethically acceptable, as long as we hold elections to determine which gang gets to rob the bank. We wouldn't accept Butch's argument, and we shouldn't accept the argument that predations by agents of the state are unobjectionable if elections are held to determine who gets to join the gang of predators.[7] If anything, the moral argument against voting is stronger than the moral case for voting.

[1] I'm assuming here that the elections are fair, that the votes are accurately counted, and that there are no recounts. Your vote may not matter at all in cases of voting fraud.

[2] See Cecil E. Bohannon and T. Normal Van Cott's "Now More than Ever, Your Vote Doesn't Matter" for a discussion of the literature on this estimate.

[3] See Gelman, Silver, and Edlin, "What is the probability your vote will make a difference?"

[5] The ten states that made a difference in the 1916 election were Alabama, California, Georgia, Kentucky, Missouri, North Caroline, Ohio, Tennessee, Texas, and Virginia.

[6] Many sources provide information about voting statistics in presidential elections. 270toWin is one such source.

[7] I must, at this point, recall Murray Rothbard's conclusion that "that the State is nothing more nor less than a bandit gang writ large."