Why Is Unemployment So High? | Mises Institute
Skip to main content

GET NEWS AND ARTICLES IN YOUR INBOXPrint
A
A
Home | Mises Library | Why Is Unemployment So High?

Why Is Unemployment So High? 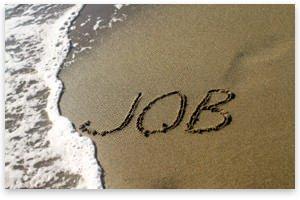 03/21/2011Robert P. Murphy
Everyone knows that the unemployment situation is very bad, but the official figures (not surprisingly) understate the problem. In this article I'll outline the severity of the stalled labor market, and explain some of the major causes.

According to the Bureau of Labor Statistics (BLS), the official civilian unemployment rate in February was 8.9 percent. However, this figure (called U-3) is very misleading in the present environment, because so many potential workers have become discouraged and are no longer seeking work. Just as a retired person, or a stay-at-home parent, isn't normally classified as "unemployed," so too does the BLS exclude these "discouraged workers" from the official count.

John Williams at Shadowstats.com estimates that if we include the short- and long-term discouraged workers, then the actual unemployment rate is currently closer to 22 percent.

To see just how unusual our current predicament is, it's actually more instructive to look at the level of employment in private industry, because it's harder to fudge these numbers:

The above chart shows the total employment among private industries from the late 1930s through the present. Notice that during every recession (gray bar), the line fell, indicating that jobs were shed. But the jobs would usually bounce back during the recovery phase, so that, from a distance, the blue line generally rises in a steady fashion.

The last two recessions have changed that standard pattern. The blue line, at a February 2011 level of 108.3 million private-sector jobs, is lower than it was way back in June 1999 at 108.6 million jobs. In the more than 11 intervening years, through immigration and natural growth the (civilian noninstitutional) US population has increased by 31 million people. And yet we have fewer private-sector jobs in the country now than in mid-1999. Simple inspection of the chart above shows that there hasn't been a comparable period of stagnant job creation since the late 1930s. 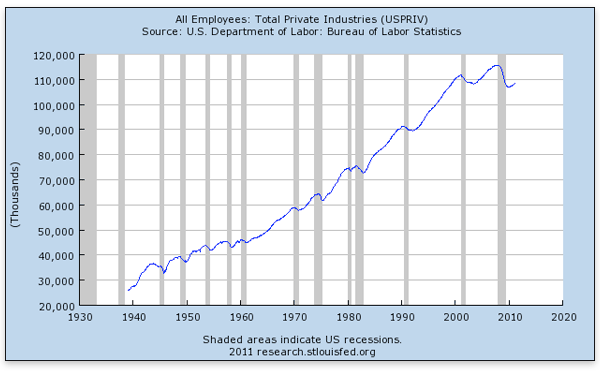 Before offering some explanations for this disturbing situation, we should first clarify what unemployment is. There are different ways of defining the condition, but we can capture the typical understanding by classifying a worker as unemployed when he or she (a) is willing to work at the going wage or salary for some categories of jobs, but (b) can't find any employer willing to extend the same offer to this particular worker, even though (c) the employer views the worker as interchangeable with other workers already on the payroll.

This last point (c) is important, even though introductory textbooks often omit it. To see why it's necessary, consider the market for NBA point guards. I would certainly be willing to take the job for the average player's salary; heck I'd even do it for 10 percent less. But no economist would consider me part of the "supply curve of labor" in this specialized market, because the team owners wouldn't view me as equivalent to other workers on the payroll. My inability to get a job starting at point guard for the Chicago Bulls is not an example of unemployment.

The first point (a) is also relevant. When we say that someone "can't find a job," we presume that the person is willing to work at the standard or going wage rate at the various jobs for which he's qualified. If a laid-off guy said, "Man, I can't get any fast-food restaurants to hire me!" but it turns out he insists on making $200,000 per year, there is a definite sense in which he's not really unemployed. (Some economists would say he is voluntarily unemployed.)

In introductory textbooks — even my own (see the section on "Price Floors" in Lesson 17) — economists often give the impression that the labor market is static, where workers know all the relevant job opportunities and employers know everything about the available pool of workers.

But as last year's Nobel laureates stressed, workers and employers engage in costly and time-consuming search for each other, in order to best match up their skills and job openings in mutually advantageous relationships.

When an employer hires a worker, it's (typically) a long-term commitment on both sides. Depending on the job, the employer will spend weeks or even months training the new hire, a period during which the worker may not be "worth" the pay he or she is receiving.

The worker is "locked in" too, and would like to only take a job where he or she thinks "things will work out" at least for a year or longer. Besides the psychological reasons, there is the simple fact that it looks odd on a résumé if a worker seems unable to hold a position for very long.

Because of the long-term nature of the employment contract, employers and workers typically spend a great deal of time researching their various options before closing a deal. Depending on the job, employers conduct a multilayered interview process, and workers may apply for dozens or even hundreds of openings.

In light of these considerations, it's helpful to think of the labor market as analogous to the housing market, as opposed to (say) the market for apples or gasoline. At any given time, the market price doesn't "clear" the housing market, because there are always some sellers with their houses still "on the market" waiting to find the right buyer.

A similar situation exists in the labor market. Even during boom periods, the unemployment rate never reaches zero. At any moment, there are always millions of workers in the United States who are in between jobs, either because they quit their previous position hoping to find something better, or because they were "let go" (including cases where the employer went out of business).

In fact, even at the height of our current recession — when unemployment hit an official rate of 10.1 percent in October 2009 — there were 3.4 million hires in the private sector. The problem was that there were 3.7 million job "separations" (including quits, layoffs, etc.) in the private sector at the same time. These job-turnover figures should remind us that the aggregate "unemployment rate" hides the incredibly complex flow of workers and other resources across various sectors of the economy.

Some Reasons for Persistent and High Unemployment

In this final section I'll run through a list of some of the reasons for the bleak employment outlook. These are not necessarily listed in order of their quantitative importance, but are all probably contributing to the problem:

The plight of American workers is bleak, far worse than the official statistics indicate. Once we understand the nature of unemployment, we see that the government and Federal Reserve's interventions have only made things worse.