GET NEWS AND ARTICLES IN YOUR INBOXPrint
A
A
Home | Mises Library | Why Not Feel Sorry for Exxon?

Why Not Feel Sorry for Exxon? 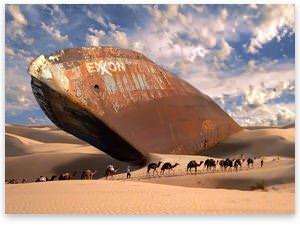 "So is everyone feeling sorry for Exxon, as I do?"

To say that the oil spill has been blown up to hysterical dimensions is a grave understatement. Hysteria abounds everywhere, and everywhere the term "disaster" is freely used. Even Pat Buchanan, who of all the media commentators I thought would be most resistant to the wiles of environmentalism, used that term. The Idiotic Overstatement Award of the Year goes to Alaska Judge Kenneth Rohl, who opined about the oil spill, "We have a manmade destruction that has not been equaled, probably, since Hiroshima."

Hundreds of thousands of innocent Japanese were massacred at Hiroshima; that's a disaster. Over the last several months, the Ayatollah's government has murdered thousands of political prisoners; a million Iranians and Iraqis were killed in their late monstrous war; the Pol Pot regime, in the mid-1970s, genocidally massacred one-third of the Cambodian population.

Those are disasters. That's "man-made destruction." In the Valdez oil spill, not a single human life was lost. Not a single person was even injured.

Furthermore, those disasters were intentional; the oil spill was, quite obviously, an accident. Who suffered the loss of the oil spill? None other than the Exxon Corporation, which lost ten million gallons of crude oil; in addition to the $5 million this loss represents, Exxon will be forced to pay cleanup costs, as well as compensation to the economic losses incurred by the fishing industry in Alaska. And so the only loser is Exxon, suffering from the negligence of its allegedly drunken sea captain. So is everyone feeling sorry for Exxon, as I do? Hell no; to the contrary, Exxon has been reviled every day by virtually everyone in the media and in public life. Contrary to government when it commits an accident or similar "externality," Exxon, as a private corporation, must pay the costs it inflicts on others.

"We must no longer allow the environmentalists to seize, undisturbed, the moral high ground."

The problem, of course, is that environmentalists don't give a tinker's dam about paying for external costs. They have their own agenda, scarcely hidden anymore. Look at all their bellyaching about the poor birds, and the sea otters, and the salmon, etc. Look at their whining, too, about the beauty of the pristine blue water now befouled with black or brown oil slicks.

(Well, hell, maybe a coating of black on blue waters provides an interesting new esthetic experience; after all, once you've seen one chunk of blue water, you've seen them all.) The environmentalists are in pursuit of their own perverse and antihuman value scale, in which every creature, animal, fish, or bird — heck even blue water — ranks higher than the wants and needs of human beings. The environmentalists welcome this trumped up "crisis," because they want to shut down the Alaska pipeline, which supplies a large chunk of domestic American oil; they want to reverse the Industrial Revolution, and get back to pristine "nature," with its chronic starvation, rampant disease, and short, ugly, and brutish life span.

Note the difference between the beserker reaction to the Valdez oil spill, and the response to the last great oil spill in 1978, off the French coast, when the Amoco Cadiz let loose no less than 60 million gallons of crude oil into the Atlantic — the worst oil spill in history. There was no hysteria, no screaming headlines, no bellyaching on television. The courts quietly forced Amoco to pay $115 million to compensate for costs of the accident, and that was that. The reactions were different because, in the meantime, the virus of environmentalism has deeply infected our culture. Arguing on the basis of private firms paying the costs of liabilities they impose upon others is all very well, but, as we see in the smears against Exxon, it is not enough.

We must no longer allow the environmentalists to seize, undisturbed, the moral high ground, and arrogate to themselves the good of the cosmos while the rest of us are portrayed as narrow, selfish, short-sighted, and immoral. There is no greater immorality than deep opposition to mankind per se, and environmentalism must be exposed as that kind of immoral and destructive creed. Only then will the party of mankind be able to take back our culture.

This article was originally published in the July 1989 issue of Liberty magazine.