Why Friedman Misunderstood Physics and Mises Was Right about Economics 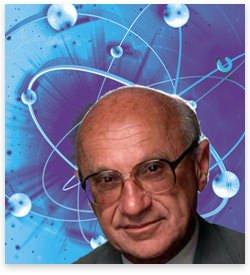 [This essay is dedicated to the memory of John David Fernandez.]

"There is no inductive method which could lead to the fundamental concepts of physics … in error are those theorists who believe that theory comes inductively from experience."
– Albert Einstein, The Method of Theoretical Physics, Oxford, 1933

Science is united by its use of logic and deductive reasoning. It remains objective and formally governed by the principle that an argument based on true premises cannot yield a false conclusion.

It is, of course, possible to derive true conclusions from false premises. To give a simple example, we may say that pigs are birds, birds cannot fly, and hence pigs cannot fly. However, positivists in the economics profession have asserted that such derivations are the most common and useful method of inference employed by the natural sciences. In this, they are entirely wrong.

In the dispute between the once-supreme caloric theory, and the nascent kinetic theory, both sides claimed to have the correct explanation for the phenomenon of heat. The caloric theory claimed heat and combustion were caused by the emanation of a substance known as "caloric" from hot bodies. The kinetic theory claimed that there was a mechanical equivalence of heat and work, so that both are simply different forms of each other — later labeled "energy" by Thomas Young in 1807.

In this particular case, we are faced with the typical situation in the natural sciences: we cannot directly establish the truth of our premises. However, we may deductively infer the consequences following from either theory.

The caloric theory was decisively rejected by Count Benjamin Rumford in 1798. He demonstrated via the friction induced by boring a hole in a cannon that one could heat water for hours and hours, just as long as the hole is bored.

Rumford noted that the amount of heat released from the cannon would have been more than sufficient to completely melt the metal, if the heat could be returned to the cannon somehow. This demonstrated that more heat was being released than could have originally been contained by the metal.

Furthermore, he was able to calculate the mechanical equivalent of heat for the work done, which was later used to establish the conservation-of-energy principle. From this followed the first law of thermodynamics, possibly the best way to sum up the kinetic theory of heat.

What we have seen here is that we have been able to rule out one proposition by demonstrating its conclusions to be false.

It should be clear to the reader now that to explain the scientific method of inference as a way of producing knowledge from false premises is patently absurd. The entire point of the scientific method is to rule out premises that are contradicted by observations. It has never meant beginning with premises you know to be false and absurd, tracing out whatever implications you can draw from there, and, when circumstantially finding congruence with your "predictions" and observed data, asserting the result of your machinations as "scientific knowledge."

The reader should now be able to note just how shaky and peculiar the methodological stance of positivist, or rather "positive," economics actually is. In Friedman's essay, "The Methodology of Positive Economics," he defends deriving consequences from clearly false premises with regard to the study of human action. He aptly states that hypotheses are not required to be "realistic" in their assumptions.

Unfortunately for him, a "hypothesis" that incorporates notions and assertions that are demonstrably false is not a hypothesis but a falsehood. Many of the falsehoods that are defended by him, like homo economicus, perfect competition, and perfect knowledge, are still applied in neoclassical economics today.

One can identify from Friedman's essay a confusion about the way in which assumptions are utilized in the natural sciences. Systems are never modeled according to assumptions that are fantastically flawed in describing them. As Lev Landau notes on the first page of his Course of Theoretical Physics, "the planets may be regarded as particles in considering their motion about the Sun, but not in considering their rotation about their axes." If physics is truly the science that modern neoclassical economists seek to emulate, it is unfortunate for them that they have utterly misunderstood its methodology. Much of what is labeled "economics" today therefore cannot correctly be described as a science.

Those who seek to justify reasoning from false premises as a reliable method for producing knowledge about the real world often use the grounds of its alleged utility in making predictions about the real world. They should consider the following story:

A few years ago, Western aid organizations and charities made the error of attempting to supplant local tribal customs and impose Western medical practices on certain African populations in order to help prevent the spread of infectious diseases. The strategy was a catastrophe; the locals did not easily take up and adopt these strange and foreign customs.

Moreover, the aid organizations completely misunderstood the way in which local practices were actually efficacious in helping prevent the spread of disease, despite being justified on grounds that were rather absurd and superstitious from a modern, scientific viewpoint. To isolate the "cursed" individual from the rest of society, and to restrict the use of the water supply in order to "repent" for collective sins, strikes us as nonsensical and superstitious. Yet the actual practices adopted on the basis of this reasoning were quite effective at preventing the spread of illness.

No sane person in Western society would attempt to describe these tribal practices as science, yet this is very similar to the reasoning used to justify Friedman's methodological stance in economics. In fact, these superstitions do actually display a pragmatic expediency and predictive power, and their premises are unsubstantiated hypotheses as opposed to false assertions — more than we can say for Friedmanite economics.

One may now wonder, could there be any scientific basis for the knowledge conveyed by economics? Ludwig von Mises provides the answer to this question. He did so, not by attempting to "revolutionize," but by revising and reflecting on the roots of a discipline he had studied and researched for a lifetime, and by improving on the thoughts and insights of his predecessors, such as Nassau Senior and Carl Menger.

The category of action and the praxeological theorems and statements developed from it are supposed to embody the most controversial aspect of modern "Austrian" economics. That other men act, aiming at ends and applying means while maintaining the same logical categories has been implied in social intercourse throughout human history. Despite the claims of racists and other polylogists to the contrary, no significant evidence has ever been provided that denies these propositions. Indeed, one who attempts to deny them must already assume their certainty in those whom he wishes to convince.

There are certainly epistemological problems with regard to our understanding of the behavior of others, no less perplexing than those associated with causality and induction. Yet those that ignore the philosophical problems associated with the methods of the natural sciences because of their demonstrated pragmatic expediency in technological application must similarly realize that the understanding of the actions of others as purposeful and conscious, sharing the same categories as oneself, has served us tremendously well, practically. No dialectical artifice can spirit away the fact that we begin our analysis of the actions of other human beings with the notion that they aim at ends and apply means to achieve them.

Praxeology is therefore based on the demonstrably true notion that we and other human beings act. Rather than utilizing the superstitious notion of collective action, praxeological actions are recognized to be made by individuals, one at a time connected together in a causal chain.

In the course of this essay, I have criticized certain applications of false premises. I have certainly not meant to criticize these as theoretical devices per se. They certainly have their uses. The evenly rotating economy is the device with which one can explain the source of profit and loss while demonstrating the equilibrating tendency prevalent and implied by market action. The counterfactual analysis of Bastiat's broken window certainly enhances our knowledge of the real world.

The science of human action is mental and aprioristic, it is the product of a logical analysis of the categories implied in different modes of action. And yet it produces an empirically valid knowledge of the consequences of these actions, since they are carried out in the real world. In order to trace cause-and-effect relations affecting action in the real world, we must combine the conceptual, praxeological knowledge we can derive with an understanding of the whims and factors affecting the actions of our fellow man.

It would do humanity a great service if more engaged in a study of the real economics: praxeological economics. It could certainly help explain a lot more than the confused empiricism currently governing the ideas of the economics profession.

This essay is dedicated to the memory of John David Fernandez.

Abhinandan Mallick is a market analyst at IHS Technology and a former summer fellow of the Mises Institute. He lives in the UK and holds masters degrees in theoretical physics and economics.