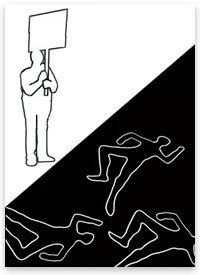 After the shooting rampage at Virginia Tech, many well-intentioned people all over the country have been calling for increased gun control laws. However, economists tend to oppose gun control laws, since such laws generally pay no attention to basic economic issues.

Let's start with the relationship between means and ends. The shooter had his ends: he wanted to kill many people, and he wanted it to be visible and spectacular. He also had his means: guns and bullets. He engaged in forward-looking behavior: he purchased the guns, bullets, chains, locks, and video equipment well in advance. He taped himself in advance explaining what he was going to do and why he was going to do it.

As Mises.org readers know, in economics, we discuss the idea of substitutes. These are goods that can be used to replace each other such as Coke vs. Pepsi, contact lenses vs. eyeglasses, Macs vs. PCs. When a person has ends, a person can select among different means to achieve those ends. These different means are substitutes.

Cho wanted to kill many people, and he wanted it to be visible and spectacular. To that end, he purchases guns, bullets, chains, and locks (to prevent survivors from escaping). Would gun control have prevented this? Or would Cho — who apparently planned this attack for weeks, based on the fact that he acquired guns, bullets, chains, and locks for weeks — have used substitute goods?

What would Cho's substitutes have been? What others means are there by which he could engage in mass murder? Well, he could have purchased a knife, although that is probably a weak substitute for guns and bullets in achieving his ends. He has to be right next to his victim, and he might be defeated in personal combat by another person. Likewise, he could not kill a lot of people in the same time frame, and it would not be as spectacular.

Perhaps he could have resorted to convincing people to engage in mass suicide, as Rev. Jim Jones did at Jonestown, or Heaven's Gate cult leader Marshall Herff Applewhite did in California. However, since Cho was apparently a non-charismatic loner, this substitute would not likely have been very effective as a means to his end of mass murder.

Consider instead, though, the news we see every day from Iraq and Afghanistan. On the day this was written, a moving car bomb killed 19 and wounded 35 in a restaurant. Meanwhile, a parked car bomb killed several more. That is the sort of visible and spectacular mass destruction that Cho desired, and it is not greatly difficult to produce a car bomb. Clearly, a car bomb is a substitute means to achieving Cho's end of a visible and spectacular killing of many students. In fact, it is possible that Cho might even have been more effective with such a means. After all, student traffic flows are very predictable, being based on when classes begin and end. Had Cho built a bomb, he could have detonated it at a time and place where hundreds of students might be within the blast radius.

So however much some people might yearn for gun control, it seems unlikely that it would have prevented Cho from achieving his ends. He had substitutes available, he had more than one means available to achieve his ends, and he plotted long enough to hit upon other means — especially since those other means are described in detail on TV, in the newspapers, and on the internet every day.

Economists recognize the relationship between means and ends, including the role played by substitutes. Economists understand that when government restricts one market, consumers merely move into another market, and when government tries to foreclose one means, individuals will simply shift into other means to achieve the same ends.

However horrendous we might find the mass shootings at Columbine, Virginia Tech, and other places, the fact is that when disaffected people start planning mass mayhem, the lack of a gun will not stop them. The 1927 Bath Township School bombing, in which 45 people were killed by a school board member, shows that guns are neither necessary nor sufficient for the commission of mass murder at schools.

Economists call for a re-thinking of the issue using economic reasoning. As Henry Hazlitt pointed out in his great book Economics in One Lesson, good analysis requires people to look past the obvious and short-term effects on some people, and to focus on the longer-term effects to all people. After all, those longer-term economic realities will arise regardless of the good intentions of people who call for market restrictions.