What's Cost Got to Do with It? | Mises Institute
Skip to main content

GET NEWS AND ARTICLES IN YOUR INBOXPrint
A
A
Home | Mises Library | What's Cost Got to Do with It?

What's Cost Got to Do with It? 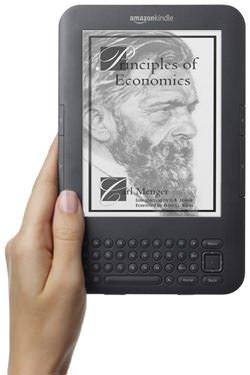 Book buyers have been used to hardback books being the most expensive, with softcover versions being priced much less, while e-book versions are cheaper still.

This pricing scheme comports with David Ricardo's doctrine that the value of consumption goods are determined by the "cost of production" or the labor theory of value. Obviously the production cost of a hardback book is greater than that for a paperback, with both of these far and away more expensive to produce than a Kindle or ePub version.

The costs of book preparation — formatting, editing, typesetting, indexing, marketing, and royalties — are incurred no matter what the book's version. However, with hard and softcover books, publishers must warehouse their inventory and there are costs associated with that. With e-books, as well as downloadable audio versions, no warehouse is required — just a hard drive somewhere.

But that's not the half of it. When Amazon or any bookseller runs through their inventory of a book in the physical form, they have to order and pay for more paper and ink to be constructed into the particular title so that orders can be filled. Replenishing inventory costs money. Not so for an e-book. Once the digital version has been created, it's good until the market doesn't accept it anymore.

So for those thinking David Ricardo had it right, expensive hardbacks and cheap e-books make all the sense in the world. But Austrians see the world differently. Consumers set prices based on their preferences. It doesn't matter what a book costs; what matters is what a reader will pay for it. Likewise, consumers in the Western world determine the prices — not by haggling — but by buying or not buying.

The illusion that costs of production determine price is created by the reality of financial viability. If you can't recover in proceeds what you have spent in production, you have to stop what you are doing or change the way you do it. If your profits are extremely high, you attract the competition to your endeavors, and then your prices have to fall. Over the long run, it's true, your marginal costs and marginal prices tend to equalize. What matters is the cause and effect: the price you can obtain for making something determines how much you can spend making it.

Buying the hardback means paying for shipping and waiting for the book to arrive. The same goes for the paperback. Physical books require shelving and space, which is, again, an expense.

E-books offer immediate availability and thousands of books can be stored in a single thin, lightweight piece of machinery, not to mention the many other cool features e-readers offer.

There is no necessary and direct connection between the value of a good and whether, or in what quantities, labor and other goods of higher order were applied to its production.… Whether a diamond was found accidentally or was obtained from a diamond pit with the employment of a thousand days of labor is completely irrelevant for its value.

The other day my friends at Amazon sent me an email announcing that Joan Didion's new book, Blue Nights, is available for pre-order. The most expensive format to buy Didion's book is on audio CD or download for $16.50. The large-print paperback version is $15.51. The Kindle version sells for $12.99, and the hardcover is $13.99 for Prime customers (shipping included).

The cost to produce a CD or downloadable audio version of a book is much less than a hardcover. And the cost of producing the hardcover is more than the softcover. And the Kindle version is the least expensive to produce by a long shot, yet that version commands nearly as much as hardcover, including shipping.

Some people want personal libraries, but most don't have the space at home to accommodate shelf after shelf of books. Kindle, ePub, and audio versions make libraries possible without the required space.

However, these changes in consumer preference don't happen all at once. Many readers still insist on reading physical books. Giving a friend a physical book seems more personal than giving an e-book as a gift. But what's really at work is that everyone's tastes are different. And with technology creating new format options, consumers have more opportunities than ever to dictate prices.

A young woman visiting my home was aghast at our numerous and prominently displayed rows of books. "Who could possibly want all of these books?" she wondered, thinking the owners were out of earshot.

Indeed, for those who haul their entire libraries around on a Kindle or iPad, row after row of physical books doesn't look impressive; it looks silly and impractical. Toting a Kindle beats carrying even just a few physical books on a trip. For these reasons and many more, buyers are now willing to spend as much for an e-book as they do for a hardback.

Also, entrepreneurial errors are ruthlessly reflected in book pricing as well. Books produced in big print runs that turn out to be flops hit the bargain bin very quickly and are sold, not for 10 or 20 percent off the retail price but for pennies on the dollar, no matter the cost.

The trends continued in the first quarter of this year with e-book sales up 146 percent from the year before, while hardcover sales grew modestly and paperback sales decreased.

Physical books still dominate total sales, but the consumer preferences are changing rapidly, and it's reflected not just in pricing but in the success and failure of business models. Brick-and-mortar, bankrupt bookseller Borders is in liquidation, while the New York Times reports, "Since April 1, Amazon sold 105 books for its Kindle e-reader for every 100 hardcover and paperback books, including books without Kindle versions and excluding free e-books."

"We had high hopes that this would happen eventually, but we never imagined it would happen this quickly," said Jeff Bezos, Amazon's chief executive, in a statement. "We've been selling print books for 15 years and Kindle books for less than four years."

Individuals engage in trade to make their lives better and satisfy their needs. Those wanting the e-book version of Joan Didion's book will decide (at a particular moment) what is worth more to them — keeping the $12.99 in their pocket or trading it for a downloadable version. What it costs Amazon to produce or obtain it is irrelevant.

Whether it's diamonds and water or hardbacks and e-books, the only cogent explanation for prices comes from the Austrians, not the classical economists.