What We Can Know About the World 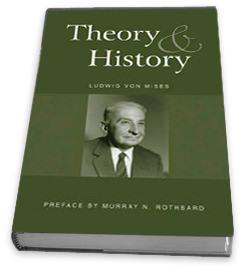 In 1957 Professor Mises added Theory and History: An Interpretation of Social and Economic Evolution to his impressive list of scholarly publications. It is Mises's philosophical treatise that sums up his views on what man can know in his world. As man has always gone amiss in his attempts to bridge the gulf between mind and matter, he must adopt a dualistic approach — or methodological dualism.

Ever conscious of this dualism and aware of the limitations of human knowledge, Professor Mises defends the sciences of human action against those philosophies and doctrines that would deny their very existence. In particular, he refutes the positivistic and panphysicalistic distortions of determinism, the doctrines of materialism, positivism and behaviorism, historicism and relativism.

Present day ideologies, according to Professor Mises, are characterized by their summary rejection of individual freedom and private property in economic production.

Millions today enthusiastically support policies that aim at the substitution of planning by an authority for autonomous planning by each individual. They are longing for slavery.

Of course, the champions of totalitarianism protest that what they want to abolish is "only economic freedom" and that all "other freedoms" will remain untouched. But freedom is indivisible. The distinction between an economic sphere of human life and activity and a noneconomic sphere is the worst of their fallacies.

If an omnipotent authority has the power to assign to every individual the tasks he has to perform, nothing that can be called freedom and autonomy is left to him. He has only the choice between strict obedience and death by starvation.