GET NEWS AND ARTICLES IN YOUR INBOXPrint
A
A
Home | Mises Library | What Is Walmart's Crime?

What Is Walmart's Crime? 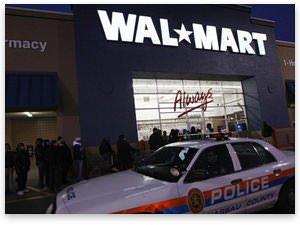 The Supreme Court's recent Walmart decision has stirred a hornet's nest at the New York Times. Indeed, what else can one expect from that paper but the belief that it would be a very good thing for lawyers and the government to loot one of the country's most successful businesses?

Yet, as I read an attack op-ed written by Nelson Lichtenstein, a professor of history at the University of California, Santa Barbara, I have to ask myself just what crime the NYT believes Walmart committed in the first place?

The charge was discrimination against women, and when feminists, racialists, and environmentalists make any charge against an American business, the NYT never fails to take their side in knee-jerk fashion. In fact, as the newspaper's editorial laments, the alleged actual damages to individuals were pretty small (maybe about $1,000), but claiming that all women who worked (or had worked) at Walmart after a certain year were victims of discrimination turned this whole thing into a multi-billion-dollar payout.

(Not surprisingly, the NYT's favorite class of lawyers, the plaintiffs' bar, would have had a small group of individuals receive hundreds of millions of dollars apiece while the women they represented wouldn't have gotten much at all. This is the NYT's version of "justice.")

I was not particularly familiar with the substance of the charges until reading Lichtenstein's article, and it hit me that he is describing the typical business atmosphere. He writes,

There are tens of thousands of experienced Wal-Mart women who would like to be promoted to the first managerial rung, salaried assistant store manager. But Wal-Mart makes it impossible for many of them to take that post, because its ruthless management style structures the job itself as one that most women, and especially those with young children or a relative to care for, would find difficult to accept.

Why? Because, for all the change that has swept over the company, at the store level there is still a fair amount of the old communal sociability. Recognizing that workers steeped in that culture make poor candidates for assistant managers, who are the front lines in enforcing labor discipline, Wal-Mart insists that almost all workers promoted to the managerial ranks move to a new store, often hundreds of miles away.

For young men in a hurry, that's an inconvenience; for middle-aged women caring for families, this corporate reassignment policy amounts to sex discrimination. True, Wal-Mart is hardly alone in demanding that rising managers sacrifice family life, but few companies make relocation such a fixed policy, and few have employment rolls even a third the size.

The obstacles to women's advancement do not stop there. The workweek for salaried managers is around 50 hours or more, which can surge to 80 or 90 hours a week during holiday seasons. Not unexpectedly, some managers think women with family responsibilities would balk at such demands, and it is hardly to the discredit of thousands of Wal-Mart women that they may be right.

Notice that Lichtenstein is not saying that only Walmart engages in these practices. Other firms have similar policies, but if I read Lichtenstein and the NYT correctly, he and the editors are claiming that this policy is "discrimination against women" only in the case of Walmart. (I am sure that the NYT has never reassigned anyone to a new location at any time, male or female.)

Furthermore, the hours of work are not unlike some of my own hours of work, or the hours that a new assistant professor on a tenure track works when appointed to the faculty of a research institution. (Go to the offices of the economics department of any major university on a Saturday, and you will see lots of assistant professors in their offices working on research papers.)

Retail management, especially at big stores like Walmart, is a difficult job. Furthermore, the holiday seasons are extremely busy times, yet Lichtenstein is claiming that Walmart has managers working these long hours, at least in part, in order to engage in discrimination.

I'll give a personal example. My oldest daughter was in sports broadcasting several years ago and was quite good. She had good connections with network broadcasters and was told that she had all of the skills to "go to the top."

One day, she called me and told me that she was leaving the profession. "I want to get married and have a family, and this career will not allow me to do it the way I want," she told me. So she went into another line of work that pays well but gives her flexible hours, and she and her husband now have two young children.

So, should my daughter have been able to sue her ex-employer — or her potential future employer, say, ESPN — for sex discrimination? After all, the kinds of hours and work that sports broadcasting requires will be disruptive to any female who wishes to have a family.

The logic of the Walmart case, at least according to Lichtenstein's screed, is the same as what I have presented above, yet no one would take seriously a claim by my daughter that these broadcasting firms had discriminated against her on the basis of sex. For that matter, I am sure that the NYT requires hours and working conditions that make it difficult for women to have families and work the way the paper would demand. So, should every reporter who has worked for the NYT be permitted to sue? It seems that the paper would be impaled upon its own logic.

To be honest, I had expected a stronger argument than what I saw. The NYT is angry because the courts did not stick it to another American business, and especially a business that does not operate according to that paper's "progressive" vision for America.