GET NEWS AND ARTICLES IN YOUR INBOXPrint
A
A
Home | Mises Library | What Radicalism? 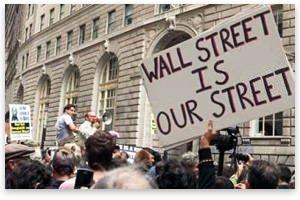 The protesters of the "occupy" movement imagine themselves to be in the spirit of history's great radicals — speaking truth to power and all that. As many have said, the movement seems blind to the real source of power in society, else they would be protesting government bureaucracies and the Federal Reserve.

Actually, however, it is even worse than that. The protest movement is not just blind to the actual driving force behind impoverishment and injustice. The main ethos of the movement is actively supportive of government and the powerful interests that back the status quo, so much so that this movement doesn't even deserve the name radical.

My exhibit is an opinion piece on the far-left site Alternet.org, a venue that often runs excellent critiques of American foreign policy. But when it comes to economic issues, it offers up the predictable goofiness that has afflicted the leftist mind for at least a century.

In "5 Conservative Economic Myths Occupy Wall Street Is Helping to Bust," author Dave Johnson gives us a peek into the economic worldview at the heart of this movement. Far from fighting power, it is supporting power. Instead of dissing the suits, it is tailoring them. The slogan on the streets should really be "Up with the Man!"

The supposed myths Johnson lists are:

Yes, these are the supposed myths. I might have phrased some differently but the bottom line is that every one of them is absolutely true. So of course it is enormously amusing to watch the author explain to us what is so obviously false about all these points. In the course of his explanation, he begins to sound like a public-service ad put out by a government bureaucracy.

So we learn from him that

the taxes that government collects are invested in the "public structures" that create the prosperity and lifestyle we enjoy — or at least did before taxes were cut. Tax revenue builds the infrastructure of transportation, courts, schools, universities, research facilities and other institutions that enable our businesses to grow and prosper and the consumer protection, safety inspection, water and sewer, health, parks and arts that help us live and enjoy our lives.

"Far from fighting power, it is supporting power. Instead of dissing the suits, it is tailoring them."

So says the commissar! Up with the mandarins! Those courts and regulations are so wonderful, aren't they? And yet, isn't it rather strange that this little litany doesn't include anything about the police that are being unleashed on the protesters? The police are making all the rest of these supposed "services" possible. The larger and more expansive the state, the more police it needs to enforce its edicts. By praising all of this and urging its expansion, the protesters are urging an expansion of the police state — and yet they seem completely oblivious to this reality.

Now, what about free enterprise? Here is how the writer characterizes the market economy that took humankind from caves to condominiums, from smoke signals to cell phones, from chasing wild animals to ordering from a fast-food window:

[Under competition] businesses are forced to cut every corner, cheapen every product, cut out every service, lay people off, cut people's wages while adding hours, gut benefits … and probably go under anyway because when every business does the same 99 percent of us can't afford to buy or do things anymore.

Leave aside the ridiculous claim that only 1 percent of the public can afford to buy things. Has he never been to Walmart (oh I'm sure he is against that too)? It is indeed true that business cuts jobs and benefits when profit margins are squeezed. Not so when businesses are succeeding. So does this writer favor higher and higher profits so that businesses don't cut back? Of course not. That would be regarded as evil too. So how about bailouts when companies are failing so that they don't have to cut employees and hours? Nope: bailouts are precisely what the protesters are against. Or how about a policy that permits businesses to waste vast resources doing whatever they want? No, that would be contrary to the environmentalist ethic of doing without. There's just no pleasing these people.

What about the idea that production follows investment and this is rooted in savings? The writer completely rejects this:

Anyone with a real business will tell you that people coming in the door and buying things is what creates jobs. In a real economy, people wanting to buy things — demand — is what causes businesses to form and people to be hired.

It hasn't occurred to this guy that there is no shortage of want in the world. The demand for stuff is infinite. The struggle inherent in the economic way of doing things comes with supplying what is demanded. The writer might respond that people need money to buy stuff. So we are back again to the old canard that printing infinite paper tickets is the path to salvation. We already have that system and it is called the Federal Reserve. Once again, this line of thinking ends up on the side of powerful elites.

Here he is on free trade, in which the whole human race cooperates toward mutual benefit while ignoring the nation-state (sweet liberty!):

What has happened is countries sell to us but do not buy equally from us, causing huge trade deficits that have drained our economy and our jobs and our wages.

"So we are back again to the old canard that printing infinite paper tickets is the path to salvation."

This is precisely the claim made by every corporate mercantilist from the late Middle Ages to the present day. They want government protection against foreign goods so that they can charge more to consumers at home. They care nothing for the well-being of anyone else but themselves. They use nationalist rhetoric ("us"?) to whip up a frenzy to back their own corporate private privileges.

And so the "radical Left" says the exact same thing? This is not a challenge to the system; it is the system.

As for government regulations, check out this mind bender:

The implied assumptions: government acts on our behalf; government is all knowing about what is needed and what is not; businesses never favor regulations as a means of outcompeting upstarts; in a market, businesses can profit even without serving the public.

None of this is true. Government acts on behalf of itself and the interest groups it represents. Government is not omniscient and is, actually, the dumbest institution in society because it does nothing but take by force and reward its friends.

As for controlling business, there is probably no regulation on the books that wasn't pushed by some fat cat somewhere as a means of clobbering the competition through legal channels. In contrast, in a market economy, there is only one path to profitability: service to others.

These are all truths that libertarians know. For example, the historical documentation is legion on the relationship between more regulation and the lobbying by top players in the corporate pecking order. What's striking is how completely oblivious this writer is to certain basic facts about reality. It's like a kind of insanity where up is down, right is left, and white is black.

However, when it comes to war and foreign policy, suddenly sanity arrives again:

Spending on wars, the "Defense" department (military), intelligence, nuclear weapons, veterans, and related budget items (including interest on money borrowed for past military spending) is a significant portion of the budget, and people instinctively feel that the country is not getting back services that match what they are putting in.

It's all true, but note the nature of his regret. He opposes the warfare state because he thinks that he discredits the government's system of extract-and-spend. He fears that all this squandering money on bombs is making it more difficult to realize the domestic agenda of all-around government planning, spending, and socialism.

Whether backing more spending, more inflation, more regulation, or more protection, it is precisely as Anthony Gregory says: "the true members of the ruling class have nothing to fear from these protests, which on balance strengthen the power elite."

These people are radicals only in the sense that the youth of the Red Guard in Mao's China and the Nazi youth movement in Vienna in the early 1930s were radical: they are only urging the regime to be truer to itself and stop compromising with its enemies. In this sense, these street protests are not benign; they might be a foreshadowing of dark times ahead.

What is desperately needed is a movement of true radicals who do actually speak truth to power, not one that serves as echo chamber for the myths that the powerful have been trying to sell us for hundreds of years.