Welfare before the Welfare State 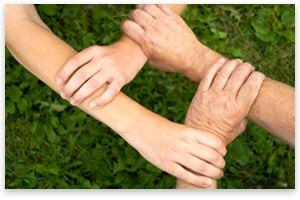 Many people think life without the welfare state would be chaos. In their minds, nobody would help support the less fortunate, and there would be riots in the streets. Little do they know that people found innovative ways of supporting each other before the welfare state existed. One of the most important of these ways was the mutual-aid society.

Mutual aid, also known as fraternalism, refers to social organizations that gathered dues and paid benefits to members facing hardship. According to David Beito in From Mutual Aid to the Welfare State, there was a "great stigma" attached to accepting government aid or private charity during the late 18th and early 19th centuries.1 Mutual aid, on the other hand, did not carry the same stigma. It was based on reciprocity: today's mutual-aid recipient could be tomorrow's donor, and vice versa.

Mutual aid was particularly popular among the poor and the working class. For instance, in New York City in 1909 40 percent of families earning less than $1,000 a year, little more than the "living wage," had members who were in mutual-aid societies.2 Ethnicity, however, was an even greater predictor of mutual-aid membership than income. The "new immigrants," such as the Germans, Bohemians, and Russians, many of whom were Jews, participated in mutual-aid societies at approximately twice the rate of native whites and six times the rate of the Irish.3 This may have been due to new immigrants' need for an enhanced social safety net.

By the 1920s, at least one out of every three males was a member of a mutual-aid society.4 Members of societies carried over $9 billion worth of life insurance by 1920. During the same period, "lodges dominated the field of health insurance."5 Numerous lodges offered unemployment benefits. Some black fraternal lodges, taking note of the sporadic nature of African-American employment at the time, allowed members to receive unemployment benefits even if they were up to six months behind in dues.6

Low prices for lodges did not, however, necessarily translate to low quality. The Independent Order of Foresters, one of the largest mutual-aid societies, frequently touted that the mortality rate of its members was 6.66 per thousand, much lower than the 9.3 per thousand for the general population.8

Lodges also had incentives to keep down costs. For instance, the Ladies Friends of Faith Benevolent Association, a black-female society, would pay members taken ill $2 a week if they saw the lodge doctor, and $3 if they didn't. A visiting committee also checked on the claimant to guard against false claims. Members who failed to visit the claimant were fined $1.9

Mutual-aid societies also enforced moral codes. In 1892, the Connecticut Bureau of Labor Statistics found that societies followed the "invariable rule" of denying benefits "for any sickness or other disability originating from intemperance, vicious or immoral conduct." Many societies refused to pay benefits for any injury sustained in the "participation in a riot."10 Some lodges even denied membership to people who manufactured explosives or played professional football.11

Many mutual-aid societies branched out and founded their own hospitals and sanitariums. The Securities Benefit Association, or SBA, charged $21 for an 11-day stay at their hospital in Kansas, while the average at 100 private hospitals was $72.12 Again, quality was not necessarily sacrificed for price. At the SBA's sanitarium, the mortality rate was 4.5 percent, while the historical average for sanitariums was 25 percent. This is especially impressive considering that 30 to 50 percent of all cases admitted to the SBA's sanitarium were "advanced."13

A large number of African-American societies also created their own hospitals. In the early 20th century, it was not a given that African-Americans would be admitted into many hospitals. If they were, they frequently had to face such indignities as being forced to bring their own eating utensils, sheets, and toothbrushes and to pay for a black nurse if none was on staff.14 When the Knights and Daughters of Tabor in Mississippi, a black fraternal society with a reach across only a few counties, opened Taborian Hospital in 1942, membership nearly doubled in three years to 47,000.15

Mutual-aid societies also founded 71 orphanages between 1890 and 1922, almost all without government subsidy.16 Perhaps the largest of these was Mooseheart, founded by the Loyal Order of Moose in 1913. Hundreds of children lived there at a time. It had a student newspaper, two debate teams, three theatrical organizations, and a small radio station. The success of Mooseheart alumni was remarkable. Alumni were four times more likely than the general population to have attended institutions of higher learning. Male alumni earned 71 percent more than the national average, and female alumni earned 63 percent more.17

Of course, with so many services being supplied by mutual aid, many groups had reason to lobby government for its destruction.

The first major blow against fraternalism occurred when the American Medical Association gained control of the licensing of medical schools. In 1912, a number of state medical boards formed the Federation of State Medical Boards, which accepted the AMA's ratings of medical schools as authoritative. The AMA quickly rated many schools as "unacceptable." Consequentially, the number of medical schools in America dropped from 166 in 1904 to 81 in 1918, a 51 percent drop.18 The increased price of medical services made it impractical for many lodges to retain the services of a doctor. Medical boards also threatened many doctors with being stripped of their licenses if they practiced lodge medicine.19

The next most damaging piece of legislation was the Mobile Law. The Mobile Law required that mutual aid societies show a gradual improvement in reserves. Until this time, societies had tended to keep low reserves in order to pay the maximum benefits possible to members. High reserve requirements made it difficult for societies to undercut traditional insurance companies. The Mobile Law also required a doctor's examination for all lodge members and forbade all "speculative" enterprises such as the extension of credit to members. By 1919, the Mobile Law had been enacted in 40 states.20

The requirement that all members undergo a medical examination effectively barred mutual-aid societies from the growing group-insurance market. Group insurance is insurance offered to a large group of people, such as all the employees at a company, without a medical examination. From 1915 to 1920, the number of people insured under group policies rose from 99,000 to 1.6 million.21 Some lodges, such as the Arkansas Grand Lodge of the Ancient Order of Workmen, tried to get around the medical examination requirement by offering group insurance at a higher price than normal lodge coverage, but this put them at a competitive disadvantage.22

Fraternal hospitals also came under attack. During the 1960s, the regulation of hospitals increased. Taborian Hospital in Mississippi was cited for "inadequate storage and bed space, failure to install doors that could swing in either direction, and excessive reliance on uncertified personnel." A state hospital regulator said of the Taborian Hospital, "We are constantly told that you do not have funds to do these things [make improvements], yet if you are to operate a hospital, something has to be done to meet the Minimum Standards of Operation for Mississippi Hospitals."25

The Hill-Burton Hospital Construction Act of 1946 also hurt many fraternal hospitals, especially black hospitals. The act required that hospitals receiving federal funds use a portion for indigent care and that services be offered "without discrimination on account of race, creed, or color." Although this enabled many blacks to get free service at hospitals previously unavailable to them, it also cut into the membership base for black fraternal hospitals. Additionally, some hospitals, such as Taborian Hospital and the Friendship Clinic in Mississippi, received no funds, while their nearby competitors received millions.26

The advent of Medicare also hastened the decline of fraternal hospitals. MIT economist Amy Finkelstein estimated that Medicare drove a 28 percent increase in hospital spending between 1965 and 1970 by encouraging hospitals to adopt new medical technologies. Smaller hospitals, such as many fraternal hospitals, were not able adopt new technologies as quickly as larger hospitals and were driven out of the market, another finding supported by Finkelstein.27

Some fraternal societies escaped the attack of the state by converting into traditional insurance corporations. Both Prudential and Metropolitan Life have their origins in fraternalism.28 Many societies, however, simply died off.

Although millions of Americans are still members of fraternal societies such as the Masons or Oddfellows, the organizations no longer have the importance in society that they once did. The history of fraternalism serves as a reminder of the power of human cooperation in a free society.

Joshua Fulton holds a B.A. from NYU, and an MFA in Creative Writing from UNC, Wilmington. He also co-organized the first successful citizens' ballot initiative in North Carolina in the last 10 years. His website is: AbsorbYourHealth.com.