The War on Drugs Is a War on Freedom 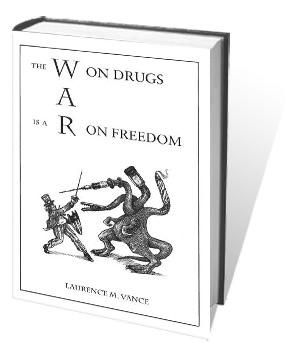 The efforts, spurred by Mayor Bloomberg, to ban large cans of drinks deemed too sugary have been much in the news lately; and a peculiar point in the mayor's defense of this measure is highly relevant to Laurence Vance's excellent book. What struck me as odd in the mayor's comments was that he confined his defense to pointing out the dangers to health posed by the drinks he wished to ban, along with the attendant monetary costs that illnesses that resulted from consuming these drinks might impose.

It never seemed to occur to Mayor Bloomberg that whether an individual decides to consume a harmful substance ought not to come under governmental supervision. The decision is the person's alone to make. What was odd about the mayor's comments was not so much that he rejected this view, but rather that he did not deem it worthy of mention. State paternalism for him required no defense.

As Vance reminds us, it is not only libertarians who reject paternalism. To the contrary, the view that the state can address only acts directed against others, not ones that affect immediately just an individual himself, is integral to the classical-liberal tradition. It received its canonical statement from John Stuart Mill:

The only freedom which deserves the name is that of pursuing our own good in our own way, so long as we do not attempt to deprive others of theirs, or impede their efforts to attain it. Each is the guardian of his own health, whether bodily, or mental and spiritual. Mankind are greater gainers by suffering each other to live as seems good to themselves, than by compelling each to live as seems good to the rest. (p. 13, quoting Mill)

Mises applied Mill's principle to the subject of Vance's book, drug regulation, in characteristically incisive fashion. To allow regulation of dangerous drugs opens the door to attacks on freedom of speech and of the press:

Opium and morphine are certainly dangerous, habit-forming drugs. But once the principle is admitted that it is the duty of the government to protect the individual against his own foolishness, no serious objections can be advanced against further encroachments.… And why limit the government's benevolent providence to the protection of the individual's body only? Is not the harm a man can inflict on his mind and soul even more disastrous than any bodily evils? Why not prevent him from reading bad books and seeing bad plays, from looking at bad paintings and statues and from hearing bad music? (p. 24, quoting Mises)

This passage illustrates Vance's force and eloquence, often based, as here, on the repetition of a key phrase.

If consequences are for Vance not the most important consideration in morality, they nevertheless matter. (By the way, it's a common misconception that supporters of a rights-based morality ignore consequences and that for them these carry no moral weight. To the contrary, almost all supporters of moral rights think that consequences are also morally important. I think that Vance ought not to have contrasted "moral" with "practical and utilitarian" considerations. Both rights and consequences are parts of morality.) Much of the book consists of a concise yet comprehensive account of the bad effects of drug regulation. The war on drugs has led to the highest prison population of any country in the world.

The drug war has had manifold invidious effects on civil liberties.

In its deleterious effects on freedom, the drug war recalls the worst excesses of Prohibition. For these, the short contemporary account of the revisionist historian Harry Elmer Barnes, Prohibition Versus Civilization: Analyzing the Dry Psychosis (Viking Press, 1932) is well worth seeking out and reading.

These immense costs have not brought with them extensive good results. To the contrary, the drug war has been a manifest failure. "In spite of decades of prohibition laws, threats of fines and/or imprisonments, and massive propaganda campaigns, drugs are available and affordable" (p. 26).

Vance, it is apparent, has launched a remarkable war of his own, conducted with superb generalship, against the drug war; and one of the arguments in his campaign strikes me as an especially effective one. The harms of tobacco and alcohol vastly exceed the ill effects of dangerous drugs, yet there is no call to ban them. Prohibition is recognized by nearly everyone as a failure, not to be repeated. If this is so, how can one justify banning less dangerous substances?

Alcohol abuse and heavy tobacco use are two of the leading causes of death in the United States. It seems rather ludicrous to advocate the outlawing of drugs and not the outlawing of alcohol and tobacco. (p. 11)

Vance writes from a viewpoint that will surprise many readers. He himself does not condone the use of dangerous drugs. To the contrary, he is a Christian and a Bible scholar of considerable note and he regards their use as sinful. "As an adherent to the ethical principles of the New Testament, I regard drug abuse to be a vice, a sin, and an evil that Christians should avoid even as they avoid supporting the government's war on drugs" (p. 79).

If Vance takes this view of drug use, why is he so adamant that people have the right to consume these drugs? His answer will be of interest to all students of moral theology. He holds that Christians can with perfect consistency uphold the distinction between vices and crimes, with only the latter an appropriate area for forcible suppression.

No Christian would be in favor of criminalizing all sins. Not when the Bible says that "the thought of foolishness is sin" (Proverbs 24:9). Why, then, are some Christians so quick to applaud making some sins criminal just because the state happens to select them and not others? (p. 84)

Vance's admirable remarks on this topic will I suspect be of great interest even to those who do not share his faith.

The War on Drugs Is a War on Freedom is an outstanding contribution to the contemporary battle for liberty. It has the potential to do great good, and Vance deserves high praise for his magnificent work.