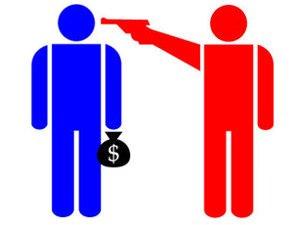 [Man, Economy, and State, with Power and Market]

The analysis in chapter 1 was based on the logical implications of the assumption of action, and its results hold true for all human action. The application of these principles was confined, however, to "Crusoe economics," where the actions of isolated individuals are considered by themselves. In these situations, there are no interactions between persons. Thus, the analysis could easily and directly be applied to n number of isolated Crusoes on n islands or other isolated areas. The next task is to apply and extend the analysis to consider interactions between individual human beings.

Let us suppose that Crusoe eventually finds that another individual, say Jackson, has also been living an isolated existence at the other end of the island. What types of interaction may now take place between them? One type of action is violence. Thus, Crusoe may entertain a vigorous hatred toward Jackson and decide to murder or otherwise injure him. In that case, Crusoe would gain his end — murder of Jackson — by committing violence. Or Crusoe may decide that he would like to expropriate Jackson's house and collection of furs and murder Jackson as a means to that end. In either case, the result is that Crusoe gains in satisfaction at the expense of Jackson, who, to say the least, suffers great psychic loss. Fundamentally similar is action based on a threat of violence, or intimidation. Thus, Crusoe may hold up Jackson at the point of a knife and rob him of his accumulated furs and provisions. Both examples are cases of violent action and involve gain for one at the expense of another.

The following factors, singly or in combination, might work to induce Crusoe (or Jackson) to refrain from any violent action against the other:

It is possible that Crusoe may institute violent action without taking into consideration the costs of the war or the long-run consequences, in which case his actions will turn out to be erroneous, i.e., the means he used were not the appropriate ones to maximize his psychic revenue.

Instead of murdering his opponent, Crusoe might find it more useful to enslave him, and, under continual threat of violence, to force Jackson to agree to expend his labor for the satisfaction of Crusoe's wants rather than his own.1 Under slavery, the master treats the slaves as he does his livestock, horses, and other animals, using them as factors of production to gratify his wants, and feeding, housing them, etc., just enough to enable them to continue in the master's service. It is true that the slave agrees to this arrangement, but this agreement is the result of a choice between working for the master and injury through violence. Labor under these conditions is qualitatively different from labor not under the threat of violence, and may be called compulsory labor as compared to free labor or voluntary labor. If Jackson agrees to continue working as a slave under Crusoe's dictates, it does not mean that Jackson is an enthusiastic advocate of his own slavery. It simply means that Jackson does not believe that revolt against his master will better his condition, because of the costs of the revolt in terms of possible violence inflicted on him, the labor of preparing and fighting, etc.

The argument that the slave might be an enthusiastic supporter of the system because of the food, etc., provided by his master ignores the fact that, in that case, violence and the threat of violence by the master would not be necessary. Jackson would simply voluntarily place himself in Crusoe's service, and this arrangement would not be slavery, but another type considered in the next section.2,3 It is clear that the slave is always worse off than he would be without the threat of violence by the master, and therefore, that the master always gains at the expense of the slave.

The interpersonal relation under slavery is known as hegemonic.4 The relationship is one of command and obedience, the commands being enforced by threats of violence. The master uses the slaves as instruments, as factors of production, for gratifying his wants. Thus, slavery, or hegemony, is defined as a system in which one must labor under the orders of another under the threat of violence. Under hegemony, the man who does the obeying — the "slave," "serf," "ward," or "subject" — makes only one choice among two alternatives:

If he chooses the first course, he submits himself to the hegemonic ruler, and all the other decisions and actions are made by that ruler. The subject chooses once in choosing to obey the ruler; the other choices are made by the ruler. The subject acts as a passive factor of production for use by the master. After that one act of (continual) choice made by the slave, he engages in coerced or compulsory labor, and the dictator alone is free to choose and act.

Violent action may result in the following developments:

In course a, the violent action has proved abortive and erroneous; in b, there is no further interpersonal interaction; in c, there is an alternation between robbery and isolation; and in d, a continuing hegemonic bond is established.

Of these results, only in d has a continuing pattern of interpersonal relationship been constituted. These relations are compulsory, involving the following coerced "exchanges": the slaves are treated as factors of production in exchange for food and other provisions; the masters acquire factors of production in exchange for supplying the provisions. Any continuing pattern of interpersonal exchanges is called a society, and it is clear that a society has been established only in case d.5 In the case of Crusoe's enslavement of Jackson, the society established is a totally hegemonic one.

The term "society," then, denotes a pattern of interpersonal exchanges among human beings. It is obviously absurd to treat "society" as "real," with some independent force of its own. There is no reality to society apart from the individuals who compose it and whose actions determine the type of social pattern that will be established.

We have seen in chapter 1 that all action is an exchange, and we may now divide exchanges into two categories. One is autistic exchange. Autistic exchange consists of any exchange that does not involve some form of interpersonal exchange of services. Thus, all of isolated Crusoe's exchanges were autistic. On the other hand, the case of slavery did involve interpersonal exchange, in which each gives up some goods in order to acquire other goods from the other. In this form of compulsory exchange, however, only the ruler benefits from the exchange, since he is the only one who makes it of his own free choice. Since he must impose the threat of violence in order to induce the subject to make the exchange, it is clear that the latter loses by the exchange. The master uses the subject as a factor of production for his own profit at the latter's expense, and this hegemonic relationship may be called exploitation. Under hegemonic exchange, the ruler exploits the subject for the ruler's benefit.6