The Value of Labor 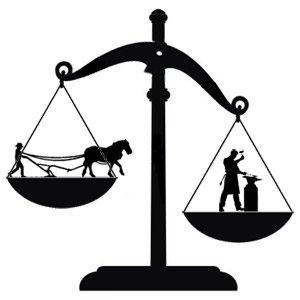 Abstract: The opportunity cost of becoming a skilled worker includes both the direct expenses as well as the foregone labor during the training period or apprenticeship. As a result, skilled workers must be paid higher wages than unskilled workers.

A laborer’s son, at 7 to 12 years of age, begins to help his father either in keeping the herds, digging the ground, or in other sorts of country labor that require no art or skill.

If his father has him taught a trade, he loses his assistance during the time of his apprenticeship and is obligated to clothe him and to pay the expenses of his apprenticeship for many years.1 The son is thus dependent on his father and his labor brings in no advantage for several years. The [working] life of man is estimated at only 10 or 12 years, and as several are lost in learning a trade, most of which in England require seven years of apprenticeship, a plowman would never be willing to have a trade taught to his son if the artisans did not earn more than the plowmen.

Therefore, those who employ artisans or professionals must pay for their labor at a higher rate than for that of a plowman or common laborer. Their labor will necessarily be expensive in proportion to the time lost in learning the trade and the cost and risk incurred in becoming proficient.

The professionals themselves do not make all their children learn their own trade: there would be too many of them for the needs of a city or a state and many would not find enough work. However, the work is naturally better paid than that of plowmen.

Some Artisans Earn More, Others Less, According to the Different Cases and Circumstances

Abstract: In addition to training and the forces of supply and demand, workers with higher quality skills, risky jobs, or jobs that require trustworthy employees will receive higher wages. This is now known as the theory of compensating differentials that is often attributed to Adam Smith.

If two tailors make all the clothes of a village, one may have more customers than the other, whether from his way of attracting business, because his products are better or more durable than the other, or because he follows the fashions better in the style of his garments.

If one dies, the other, finding himself with more work, will be able to raise the price of his labor, expediting the work of some in preference to others, until the villagers find it to their advantage to have their clothes made in another village, town, or city, losing the time spent in going and returning, or until another tailor comes to live in their village and shares the business.

The jobs that require the most time in training or most ingenuity and industry must necessarily be the best paid. A skillful cabinetmaker must receive a higher price for his work than an ordinary carpenter, and a good clock- and watchmaker more than a blacksmith.

The arts and occupations, which are accompanied by risks and dangers, like those of foundry workers, sailors, silver miners, etc., ought to be paid in proportion to the risks. When skill is needed, over and above the dangers, they ought to be paid even more, such as ship pilots, divers, engineers, etc. When capacity and trustworthiness are needed, the labor is paid still more highly, as in the case of jewelers, bookkeepers, cashiers, and others.

By these examples, and a hundred others we could draw from ordinary experience, it is easily seen that the differences in the prices paid for labor is based upon natural and obvious reasons.

The Number of Laborers, Artisans, and Others, Who Work in a State, Is Naturally Proportioned to the Demand for Them

Abstract: The supply of workers adjusts itself to the demand for labor, across all professions, via wage rates, migration, and changes in population. Prosperity cannot be created by subsidizing job training.

If all the farm laborers in a village raise several sons to the same work, there will be too many farm laborers to cultivate the lands of the village, and the surplus adults will have to leave in order to seek a livelihood elsewhere, which they generally find in cities. If some remain with their fathers — as they will not all find sufficient employment — they will live in great poverty and will not marry for lack of means to raise children. If they do marry, their children will soon die of starvation, with their parents, as we see every day in France.

Therefore, if the village continues in the same employment pattern, and derives its living from cultivating the same area of land, its population will not increase in a thousand years.

It is true that the women and girls of this village can, when they are not working in the fields, occupy themselves in spinning, knitting, or other work that can be sold in the cities. However, this rarely suffices to support the extra children, who leave the village to seek their fortune elsewhere.

The same may be said of the artisans of a village. If a tailor makes all the clothes for the villagers and then raises three sons to the same job, there will only be enough work for one successor to him and the other two must seek their livelihood elsewhere. If they do not find employment in the neighboring town, they must move farther away or change their occupations and earn a living by becoming servants, soldiers, sailors, etc.

By the same process of reasoning, it is easy to conceive that the laborers, artisans, and others, who earn their living by working, must proportion themselves in number to the employment and demand for them in market towns and cities.

If four tailors are enough to make all the clothes for a town and a fifth arrives, he may find some work at the expense of the other four. Therefore, if the labor is divided between the five tailors, neither of them will have enough work, and each one will live more poorly.

It often happens that laborers and artisans do not have enough employment when there are too many of them to share the business. It also happens that they can be deprived of work by accidents and by variations in demand, or that they are overburdened with work, according to the circumstances. Be that as it may, when they have no work, they leave the villages, towns, or cities where they live in such numbers and those who remain are always proportioned to the employment that suffices to maintain them. When there is a continuous increase of work, there are gains to be made and others will move in to share the business.

From this, it is easy to understand that the charity schools in England, and the proposals in France to increase the number of artisans, are useless. If the king of France sent 100,000 of his subjects, at his expense, into Holland to learn seafaring, they would be of no use when they returned if no more vessels were sent to sea than before. It is true that it would be a great advantage for a state to teach its subjects to produce the manufactured goods that are customarily drawn from abroad, and all the other articles bought there, but I am, at present, only considering a state in relation to itself.2

As the artisans earn more than the laborers, they are better able to raise their children into professions, and there will never be a lack of artisans in a state when there is enough work for their constant employment.3

This article is excerpted from An Essay on Economic Theory, part I, chapters 7–9 (2010).