Use the Dollar or Else 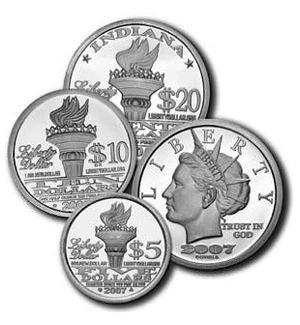 04/06/2011Llewellyn H. Rockwell Jr.
Look up the phrase "a unique form of domestic terrorism" on a search engine and you will turn up a story about a man whom the US government is trying to cage from now until the time of his death.

And his crime? His unique form of terrorism? He minted silver and copper coins and sold them. In other words, he did what innumerable entrepreneurs from the beginning of time have done. He attempted to provide consumers with a store of value. No one was forced to buy. He met a market demand, and that's it.

Whom did he hurt? No one. Unlike illegal drugs, which the government bans on grounds that it doesn't want us to hurt ourselves, these silver coins did not endanger their users. They only gave people an option on what to do with their money. Did the proprietor attempt to claim that these were legal tender for monetary exchange? No, he sold them for what they are.

It is wholly understandable that people have doubts about the future of the paper dollar. Many people are seeking alternatives, in their own financial interest. What this proprietor did was provide something that turned out to be a possible alternative to the dollar. And for that, and that alone, he is being hounded and destroyed.

His name is Bernard von NotHaus and he is 67 years old. In the course of the proceedings, he was called every name imaginable. He was called a crook, a terrorist, a crank, and a crazy man. What he actually did, however, should be fully legal and encouraged in any nation, in all times and all places.

A nation that is confident about its money's future would not fear currency competition. A nation with a dying money uses every possible means to crush the competition. That is precisely what is happening in the case of the so-called Liberty Dollar.

What's striking here is that no one believes there is any reason to argue the point. It is obvious to his persecutors that he is a criminal. "He's playing on a core idea of the radical right, that evil bankers in the Federal Reserve are ripping you off by controlling the money supply," said Mark Potok of the Southern Poverty Law Center. "He very much exists in the world of the anti-government patriot movement, whatever he may say. That's who his customers are."

And what is the interest of the SLPC in this case? This is a group that claims to be about stopping hate and racism — and this has something to do with opposing poverty. And yet here they are intervening in a case in which a man is actually trying to prevent people from being impoverished. As for the Fed, it is not exactly an act of hate to point out that the Fed controls the money supply. Bernanke himself admits this!

The government has made no bones about the foundation of its case. Citing a Civil War–era law, prosecutors say that it is a crime to compete with the official dollar. Note that they are not citing the US Constitution, which nowhere prevents such a thing. In fact, private coinage has a rich history in the United States. It was essential when the West was being settled. Providing coinage services was as common as any other trade.

But since 1971, when the dollar became all paper, there has been a sense that its viability needs the backing of federal guns in order to thrive. This attitude is inconsistent with freedom. The right of private coinage is an essential part of free enterprise. Currency competition, especially in a digital age, is something that every country needs.

As Seth Lipsky wrote in the Wall Street Journal, "Certainly it's a loser's game to suppress private money that is sound in order to protect government-issued money that is unsound."

Precisely. As Lipsky points out, NotHaus operated very close to the line in terms of legality. He put the dollar sign on his coins, for example, and sold them with numbers. I can't comment on his business dealings or the integrity of his operations. But this much is clear: the grounds on which he is being hounded are egregious and tyrannical.

Allowing for alternative currencies is not terrorism. It is a path to monetary reform, merely an application of the principle of free enterprise to a sector that should have never fallen so completely to government control. The people who are working to provide alternatives should not be jailed; they should be celebrated in every country that values freedom.