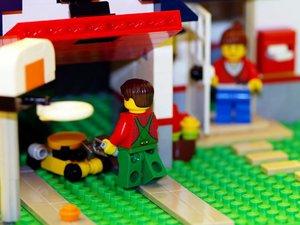 Lego — the company that makes stackable toy bricks — has become a toy powerhouse in recent years, even surpassing Mattel in toy sales during 2014. Lego has become so popular, in fact, that the company has problems avoiding “brick shortages.”

Lego’s success as a fun and educational toy has been helped along by the fact that — finally — Lego has managed to find success with girls.

With the launch of the Lego Friends line, Lego has tapped into 50 percent of the child population:

according to research firm NPD Group, the market for girls’ construction toys in the U.S. and the main European countries tripled to $900 million in 2014 from $300 million in 2011, largely on the back of the Lego Friends sets. And Lego says the share of girls among Lego players, which stood below 10% in the U.S. before the launch of Lego Friends, has increased sharply.

Perhaps predictably, Lego has been condemned by feminists and culture warriors for making Lego too “girly.” Those familiar with the Friends line already know how, instead of red and blue bricks for making fire stations, the new line designed for girls features purple and pink blocks (among other colors) for constructing yachts, homes, and restaurants.

After five years of work, [Lego] was enthusiastic about launching Lego Friends. The new sets, however, immediately unleashed a torrent of criticism from feminist groups. A U.S. activist organization, the Spark Movement, gathered 50,000 signatures with an online petition in 2012 and requested a meeting with Lego executives. Another group, Feminist Frequency, also complained.

“We were so disappointed,” said Dana Edell, executive director of the Spark Movement. “Lego was sending a message that girls get to play with hair dryers while boys get to build airplanes and skyscrapers.”

Ms. Edell, however, should probably aim her disappointment and disdain at seven-year-old girls rather than at Lego. After all, Lego’s success, or lack thereof, in marketing these products depends on the decisions of little girls.

That is, Lego can only make money from the girl demographic if it makes toys little girls decide they want to play with. Following years of focus groups and surveys, Lego has produced toys that it thinks will attract their attention and demand.

Lego has said exactly this in interviews:

Our methods are simple; meet children’s needs by testing prototypes on them and getting their opinion. We have realized that girls like building too, so LEGO gave them the chance to customise their world, until then their needs were not met. We also realised that girls wanted to be able to identify with the figures and we therefore had to develop figures closer to their expectations: more feminine, less “square” than our standard mini-figurines. Since friendship is a core value for little girls, we created a universe which centred around a story of friendship between our 5 heroines.

Anyone who has daughters — and listens to what they say — can see this is a plausible scenario.

The Lego Friends line, which is just as rigorous in terms of construction difficulty as any other line, was designed to appeal to girls in ways that Legos did not before.

Lego wanted girls to buy their products, so it designed products that appealed to them, based on market research.

How Lego Became a Boy Brand

If Lego ignored what girls really wanted, and marketed something else, they would not make as much money. Or no money at all.

This explains how Lego became a “boy’s brand” in the first place.

After marketing its toys for years in a unisex manner, Lego found by the 1980s that all its best-selling sets were “boy” sets featuring pirates and knights and spacemen.

The company then began to market more aggressively to boys, since like most companies, it ended up focusing on the most profitable sector of its customer base.

Lego still attempted to market to girls, but failed, perhaps even due to genuine sexism. Thinking that girls did not want the same level of rigor in construction as boys, Lego in the 1970s and afterward marketed a variety of “simplified” types of Legos that failed. These included Lego jewelry sets known as “Scala” and easy-to-build sets based on mimicking doll houses.

If Lego was being sexist, it was punished by the market for it. Lego simply failed to cater to the wants and needs of girls. And it endured foregone profits because of it.

With Lego Friends, Lego finally found a line that girls actually like, and the market is rewarding them accordingly. Meanwhile, feminists attack Lego for making toys that children want to buy, but which feminists think girls should not want to buy.

The real problem the anti-Lego feminists have then, is not with Lego but with the fact that girls like to play with the sort of toys found in the Friends line. The blame for this lies with the girls themselves.

After all, Lego did not raise these girls or tell them what to like. Lego simply wants to make toys that they will buy based on their existing preferences.

Indeed, any competent toy executive will be agnostic as to the question of what girls should like. They must focus instead on what girls do like. Toy companies make money by selling toys that will be popular with as little effort (for the company) as possible. And, it turns out, much to the annoyance of some activists, girls like a Lego experience that includes pink and purple bricks.

Now, the source of the misunderstanding here is apparent. The activists think that Lego is responsible for deciding what girls should want because — like many people who don’t understand how markets work — they think that producers dictate to consumers what to buy.

The idea at work here is that girls will buy and like whatever it is that Lego Corp. wants to market to them. Thus, by extension, it is Lego’s job to fight culture wars and tell girls what the “correct” play experience is.

But it doesn’t work that way. Companies make money by selling what people want. At the same time, companies that make products few people like will ultimately fail, no matter how many commercials they put on the television.

Consumers Decide What Is Produced

After all, if people will buy whatever they’re told to buy, then why not just spend nearly 100 percent of the toy company’s budget on marketing and advertising? The rest can go to making a low-quality product. If it breaks easily or turns out to be no fun, then that’s all the better because then they’ll just buy another one because an ad told them to.

If a slick ad campaign is all that is necessary to make someone like a product, just make a slick ad showing the sub-par product in a good light. People will just keep on buying it because the advertisements say so.

Everyone instinctively knows this is not true, though. McDonald’s can run TV commercials all day long, but that, apparently, isn’t enough to keep people buying Mickey D’s food at the price the company prefers. Subway can repeat the “eat fresh” mantra, but that won’t keep sales from slipping, as they have been doing for several years.

And if we’ll buy whatever toy makers tell us to buy, why aren’t children playing with the same toys they were playing with thirty years ago? It costs money to develop new toy lines and design new sets. Why go through the trouble of creating new toys, when it’s possible to make customers like your products by just running ads for existing ones?

The reason for this, as Murray Rothbard observed long ago, is that every consumer has the ability to simply refuse to purchase what she’s asked to buy for whatever reason or whim she deems important. Ludwig von Mises called this “consumer sovereignty.”

Even more frustrating to producers is the fact that consumer preferences change constantly due to a variety of — often inscrutable — factors far beyond the control of marketers and producers. Producers thus have a choice: adapt to changing customer preferences, or die.