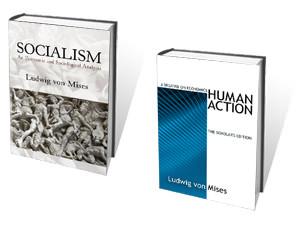 In symposiums written "in honor of" some distinguished writer, the individual contributors too often go off on tangents of their own, and develop points of view that may be irrelevant or even alien to the writer they are supposed to honor. In order to pay homage to the great contribution of Ludwig von Mises in a more direct way than in my following essay, therefore, I herewith take the liberty of reprinting reviews that I wrote of two of his most important books.

The first is my review of his Socialism, which appeared in the New York Times of January 9, 1938:

Ludwig von Mises is professor of economics in the University of Vienna. His volume Die Gemeinwirtschaft, published in 1922, was a thorough analysis of socialism and socialistic ideas. A new edition appeared in 1932. This, with some additions contributed by the author, has now been translated under the title of Socialism, and becomes available for the first time to English readers.

In the years since its original publication the volume has attracted increasing attention as the course of events has made its contentions increasingly pertinent. Though considerably more than 200,000 words long, it is never prolix. On the contrary, it is written with remarkable concision. Its length is due solely to its thorough and comprehensive character. It examines socialism from almost every possible aspect — its doctrine of violence as well as that of the collective ownership of the means of production; its ideal of equality; its relation to problems of sex and the family; its proposed solution for the problem of production as well as of distribution; its probable operation under both static and dynamic conditions; its national and international consequences. It considers particular forms of socialism and of pseudo socialism; the doctrine of the class war and the materialist conception of history; various Socialist criticisms of capitalistic tendencies or alleged tendencies; socialistic ethics; and finally various forms of "gradual socialism" and "destructionism."

No open-minded reader can fail to be impressed by the closeness of the author's reasoning, the rigor of his logic, the power and unity of his thought. This is by far the ablest and most damaging answer to the Socialist philosophy since Böhm-Bawerk, another Austrian economist, also from the University of Vienna, published his memorable Karl Marx and the Close of His System in 1898. It is more than that. Böhm-Bawerk confined himself mainly to an examination of Marx's technical economics.

Mises, apparently on the assumption that Böhm-Bawerk disposed so thoroughly of Marx's strictly economic analysis of capitalism that the work does not have to be done again, does not go over this ground, except by incidental reference. But he recognizes that socialism does not stand or fall with Marx's economic analysis; and therefore he devotes himself to the much wider task of examining all the arguments against capitalism or in favor of socialism from whatever source.

He does this with such power, brilliance, and completeness that this book must rank as the most devastating analysis of socialism yet penned. Doubtless even some anti-Socialist readers will feel that he occasionally overstates his case. On the other hand, even confirmed Socialists will not be able to withhold admiration from the masterly fashion in which he conducts his argument. He has written an economic classic in our time.

Mises analyzes his problem from so many sides that it is difficult even to outline his argument in a brief review. The contention most closely associated with his name is that socialism is certain to fail because it is incapable by its very nature of solving the problem of economic calculation. Unable to solve this, a Socialist society would not know how to distribute its labor, capital, land, and other factors of production to the best advantage. It would not know which commodities it was producing at a social profit and which at a social loss. It would not know what any worker, or what any other factor, was actually contributing to the production of economic values. Unable to determine any worker's productive contribution, the Socialist society would be unable to fix his reward proportionately or know how to maximize his incentives.

The greatest difficulty to the realization of socialism in Mises's view, in short, is intellectual. It is not a mere matter of goodwill, or of willingness to cooperate energetically without personal reward. "Even angels, if they were endowed only with human reason, could not form a socialistic community." Capitalism solves this problem of economic calculation through money prices of both consumers' and producers' goods which are fixed in the competition of the open market.

State and municipal and even Soviet socialism, in other words, are parasitic on their capitalist environment in a double sense. State or municipal socialism pays its open or hidden deficits by taxing private business. Both it and Russian socialism, in addition, are able to make calculations only with the aid of prices established by private enterprise. Pure or complete socialism, as Mises shows, could not make these calculations. Unfortunately, it is impossible here to outline the argument by which he reaches this conclusion, or even to indicate the nature of his other arguments.

Mises is a traditional liberal. He defends the private ownership of the means of production purely on utilitarian grounds: such ownership is most desirable from the standpoint of social happiness, peace, freedom, and productivity. "Liberalism upholds private property not in the interests of the owners but in the general interest." It is Marxian ideology and not an opposition of real interests, he holds, which has made the modern world "class conscious."

He is not hopeful regarding the future:

Several generations of economic policy which was nearly liberal [he writes] have enormously increased the wealth of the world. Capitalism has raised the standard of life among the masses to a level which our ancestors could not have imagined. Interventionism and efforts to introduce socialism have been working now for some decades to shatter the foundations of the world economic system. We stand on the brink of a precipice which threatens to engulf our civilization.

Opposition in principle to socialism there is none. Today no influential party would dare openly to advocate private property in the means of production. The word "capitalism" expresses, for our age, the sum of all evil. Even the opponents of socialism are dominated by Socialist ideas.

And yet he maintains that these ideas are wholly false. But he does not despair altogether: "It is true that the masses do not think. But just for this reason they follow those who do think." So he still holds forth a faint hope that sober, dispassionate reasoning may turn the world Socialist tide in time.

The following review of Human Action appeared in my column in Newsweek magazine of September 19, 1949:

There has just been published by the Yale University Press a book that is destined to become a landmark in the progress of economics. Its title is Human Action, and its author is Ludwig von Mises. It is the consumation of half a century of experience, study, and rigorous thought.

No living writer has a more thorough knowledge of the history and literature of economics than Mises, and yet no living writer has been to more pains to take no solution of any problem on faith, but to think out each solution, step by verified step, for himself. The result is a work of great originality written in a great tradition. Although it builds on what was sound in the classical economists and on the revolutionary revision of Menger, Böhm-Bawerk, Jevons, Clark, and Wicksteed, it extends beyond any previous work the logical unity and precision of modern economic analysis.

I know of no other work, in fact, which conveys to the reader so clear an insight into the intimate interconnectedness of all economic phenomena. It makes us recognize why it is impossible to study or understand "collective bargaining" or "labor problems" in isolation; or to understand wages apart from prices or from interest rates or from profits and losses, or to understand any of these apart from all the rest, or the price of any one thing apart from the prices of other things.

So far is Mises's approach from that of the specialist that he treats economics itself as merely part (though the hitherto best-elaborated part) of a more universal science, "praxeology," or "the science of every kind of human action." This is the key to his title and to his 889 comprehensive pages.

Mises is so concerned to lay the foundations of his work with unassailable solidity that he devotes the first 142 pages to a discussion of "epistemological" problems alone. This is apt to discourage all but the most serious students of the subject. Yet there is nothing pretentious or pedantic in Mises's writing. His sentences and vocabulary are as simple and clear as his profundity and closely woven logic will permit. Once his more abstract theoretical foundations have been laid his chapters are models of lucidity and vigor.

Outstanding among his many original contributions are his "circulation credit" theory of business cycles, which emphasizes the harm of cheap-money policies, and his demonstration that partial socialism is parasitic on capitalism and that a complete socialism would not even know how to solve the problem of economic calculation.

This book is in fact, as the publishers declare, the counterweight of Marx's Das Kapital, of Lord Keynes's General Theory, and of countless other books recommending socialization, collectivist planning, credit expansion, and similar panaceas. Mises recognizes inflationism under its most sophisticated disguises. He demonstrates repeatedly how statist interventions in the market economy bring about consequences which, even from the standpoint of those who originally advocated the interventions, are worse than the state of affairs they were designed to improve.

Human Action is, in short, at once the most uncompromising and the most rigorously reasoned statement of the case for capitalism that has yet appeared. If any single book can turn the ideological tide that has been running in recent years so heavily toward statism, socialism, and totalitarianism, Human Action is that book.

It should become the leading text of everyone who believes in freedom, in individualism, and in the ability of a free-market economy not only to outdistance any government-planned system in the production of goods and services for the masses, but to promote and safeguard, as no collectivist tyranny can ever do, those intellectual, cultural, and moral values upon which all civilization ultimately rests.