The Truth About Dubai 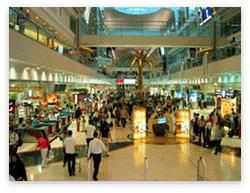 The uproar over Dubai Ports World's planned purchase of franchises at several American port facilities continues. Being owned by the United Arab Emirates (UAE) is enough to make the company a subject of demagoguery in Washington, DC. The nation's capital is a place where people seem unable to comprehend the profit motive. And Dubai Ports could not possibly build a profitable global ports operation if it had a reputation for lax security.

The instigators of the current furor, captive to anti-Arab stereotypes, seem entirely ignorant of reality in the city of Dubai, the second largest emirate within the UAE. As I discovered on a recent trip to Dubai, the city is the furthest thing one could imagine from being a hotbed of Islamic extremism. Dubai is rapidly evolving into the leading financial and commercial center in the Middle East.

Less than 10% of the city's economy depends on oil revenues, with the majority generated from international trade and tourism. A tolerant, cosmopolitan, and culturally diverse city, roughly 85% of its population is comprised of non-citizens. Most are workers from across South Asia and Southeast Asia. While Arabic is the official language, English is the language of business and finance. English-speaking tourists will find no difficulty conducting business in Dubai.

The city also caters to five million upscale tourists per year from places like Russia, Germany and France and across the Middle East. Dubai is a playground for the rich, with ultra-modern five-star beach hotels and sprawling duty-free shopping malls. Every high-end Western brand imaginable is on offer. Gold, silver, and diamond jewelry are Dubai's specialties. Dubai offers its travelers an indoor ski slope (in the desert!), world-class tennis, golf, and horse racing events, and the opportunity to buy property on man-made Persian Gulf islands formed into the shape of the world's continents. Already lined with dozens of modern skyscrapers, Dubai is currently experiencing a construction boom that includes plans for the tallest building in the world, the Burj Dubai (scheduled for completion in 2008).

The extravagant city is often compared to Las Vegas, but I found it to be more like the Singapore of the Middle East. Though tourism is vitally important to the city, its economy is built on a foundation of international trade. With its meager oil reserves dwindling, the tiny emirate has diversified its economy by building its duty-free port into the re-export center of the region. It also aspires to be the region's leading financial market, having recently built the Dubai International Financial Center to lure global financial firms with a Western-based commercial system conducted in US dollars.

Much of the political slandering of Dubai is based on a protectionist desire to prevent the free flow of capital across borders mixed with a stereotypical impression that the city is a murky bazaar of money laundering and arms trafficking. In fact, Dubai has long been a crossroads of trade, barter, and informal cash transfers. Historically it has weathered many efforts by colonial powers and foreign governments to control its economic destiny. This began in the 1800s when the British imposed an exclusive trade arrangement monopolizing its lucrative trade links with India. More recently, Dubai traders created black markets in gold, helping Indian expatriates to bypass India's ban on gold futures trading from 1962-2004. Dubai traders have also helped import consumer electronics and clothing into nearby Iran, helping people there sidestep US economic sanctions (which only apply to US corporations).

In a region of the world not known for economic freedom, market capitalism has deep roots. Dubai is a key center of hawala, an unregulated private system of payments and currency trading between the Middle East, South Asia, and Southeast Asia. Similar to a banking system of clearing checks, hawala brokers facilitate transactions and money transfers for a 1%-2% commission. For less money than a typical bank rate, the centuries-old payments system eases currency and gold transfers between Dubai's many migrant laborers and their families abroad.

Unfortunately, hawala is under pressure from the US government, which is trying to impose its own bank reporting and record keeping regulations throughout Dubai. The US regulatory efforts are a misguided attempt to prevent money laundering and the financing of terrorism. If informal cash transfers are regulated in Dubai, they will flee to other unregulated locales. Neither legitimate nor illegitimate informal payments can be eradicated by banking regulations. The restrictions will, however, crush the only available means for Dubai's many expatriate workers to send money to their families abroad. The regulated banking system is not a viable option for them. In India, for example, family members are likely to live in remote villages without the modern financial services institutions found in urban centers. They may be too uneducated or illiterate to utilize formal banking services, or too poor to afford the higher fees associated with highly regulated money transfer vehicles.

Most important, expatriate workers are likely to have fled areas of ethnic or religious strife, where minorities are subject to oppression and reprisals. Secrecy, anonymity, and security of financial transfers are critically important to such people, and perhaps essential to the survival of their families back home. Hawala makes it possible to work in Dubai and send money home securely. US-style financial disclosure regulations could destroy Dubai as a refuge for ethnic minorities in desperate need of employment outside of their home countries.

Instead of persecuting Dubai, the US government should be encouraging its embrace of globalization and social openness. It could also learn a thing or two from Dubai's remarkable example of decentralized power. Each of the seven emirates within the UAE retains a substantial degree of sovereignty and independence. Dubai has effectively opted out of OPEC oil production quotas despite the UAE's membership in the cartel. In an era of high oil prices, this kind of competition in the Arab world is welcome.

The UAE is in many respects the model Arab country. It is a staunch American ally that has apprehended several major al-Qaeda suspects. In diplomatic and economic terms, the UAE could not be friendlier to America. Critics have pointed out that two September 11 terrorists from the UAE moved money through Dubai. Yet several of the terrorists resided in New Jersey and Florida, moving money through these states as they completed their training.

If guilt by association is applied across the board, then Congress would have to scrutinize Saudi Prince Al-Waleed as the largest shareholder of Citigroup, a possible conduit of terror financing. After all, most of the September 11 hijackers were Saudi citizens. Tarring entire countries like the UAE with the "terrorist" brush is absurdly unfair, and blocking all Muslim investments in the United States would be impractical and self-defeating.

The national security issue is a red herring. In my own experience, security at Dubai's airport was rigorous. My baggage was searched thoroughly by hand. Interestingly, this search was faster and more thorough than the one I experienced upon entering or leaving the United States.

President Bush is correct, whatever his motives, to support Dubai Ports World's planned acquisition of some US port operations. Tragically, this and future foreign investments are threatened by the national security hysteria and anti-Arab atmosphere that Bush initially created. The net result may be less foreign investment in the United States as Middle Eastern investors take their petrodollars elsewhere.

J. Henderson is an investment banker in New York City. Send him mail. Comment on the blog.