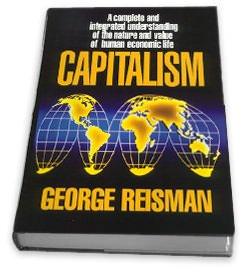 Professor Reisman centers his enormous book on a key insight: it is capitalists themselves who run the capitalist system.1 As I will show, this insight enables him to bring out a vital aspect of Austrian economics, essential to a grasp of that system of thought.

Yet, although Reisman was a student of Mises, and has the greatest admiration for him, Reisman also tells us that he wishes to combine Austrian views with the classical economics of Ricardo and his school. "Because of the profound influence of the classical economists on my teaching, it would be more appropriate to describe my views as 'Austro-classical' rather than as 'Austrian'" (p. 11, n. 2). Is this combination tenable?

The case that it is not can be put in this way: According to Mises, the consumers in a capitalist economy are sovereign. Their decisions to buy determine what goods will be produced. As Mises never tired of asserting, modern capitalism is a system of mass production for the masses. And the sway of consumer sovereignty is not limited to the goods that consumers purchase themselves — far from it.

We may locate more precisely the apparent contradiction between Reisman's system and Austrian economics. Our author takes pains to inform us

Can the rejection of Menger's doctrine of imputation be put any more clearly?

Professor Reisman holds that to embrace the view he repudiates is to adopt what he terms "a Platonic-Heraclitean view of the nature of entities" (p. 675, emphasis omitted). If one claims, say, that the price of bread includes the price of flour, then one must hold that bread can be both itself and flour at the same time. But to hold this is to claim that entities are the "creation of the human mind in the form of abstractions which can be put together and taken apart at will to form different entities" (p. 675).

However, our author does not reject consumer sovereignty, and he remains an Austrian in good standing. He explains: "When the Austrian theory of value declares that the value of consumers' goods determines the value of the means of producing them, it is always on the assumption … that the relationship between the value of the products and the value of the factors of production can be ignored" (p. 689). More simply put, Reisman readily acknowledges that consumers, by their spending, determine which consumer goods will be produced. Their decisions in turn bring about shifts in spending on factors of production. He denies, however, that consumers decide the balance between capital and consumer goods in the economy.

But does Reisman, in fact, remain true to Austrian economics? It might be claimed that he does not. What, according to Austrians, determines the balance between total spending on consumer and capital goods? Clearly, it is the rate of interest.

But to say this seems to reintroduce exactly what Reisman wishes to repudiate. Time preference determines the rate of interest; if so, then it appears that consumers, who determine the rate of time preference, do set the balance of spending in the last analysis. And if the consumers do not settle this, who does?

Here, at last, we reach the heart of Reisman's system. He acknowledges that the rate of interest determines the relative shares of capital and consumer goods, but he maintains that this rate depends on the rate of profit, itself determined by the producers' demand for consumption goods. Is this not, in effect, to say that the time-preference rate of businessmen, rather than consumers, principally sets the rate of interest?2

Reisman holds this view because, as he sees matters, business spending controls the economy. He wishes to show "the enormous role of [business] saving and productive expenditure in the generation of aggregate demand — a role which far exceeds that of consumption expenditure in size and … is more fundamental" (p. 683). Our author takes great pains to work out a new concept, Gross National Revenue, that reflects these realities better than the customary measures of national product.

Our author's difference from the "standard" Austrian position comes to this: On the usual view, time preference determines interest. On Reisman's modified Austrian view, "the connection between the rate of profit and time preference is not direct, but indirect" (p. 743). Time preference determines interest only through its effect on the rate of profit. This "give" in the system permits Reisman to deny the unlimited scope of consumer sovereignty. Reisman thus adopts a "weak" concept of imputation.

Even if I am right that Reisman remains within the Austrian ambit, why does all this matter? Because our author's innovation permits him to deal a deathblow to one version of Keynesianism.

In the Keynesian view, prosperity largely depends on the level of consumer spending. "With such an exaggerated view of the role of consumption expenditure as constituting virtually all spending, there is nothing left for the view of saving except to regard it as hoarding" (p. 683). For Reisman, prosperity depends mainly on business saving and spending, not the vagaries of consumers.

But one might object that Keynesianism easily makes a comeback. Another variant of that doctrine, perhaps truer to Lord Keynes himself, blames depressions on erratic investment governed by "animal spirits," and takes swings in consumer spending to be of only secondary significance. What good will it do Reisman as a defender of capitalism to ascribe autonomy to capitalists if their actions are characteristically erratic?

To this our author has a ready response: he maintains that capitalist investment in the free market easily sustains continued growth. In particular, there is no long-term tendency for the rate of return on capital to decline. If he is right, Keynesianism of this variety fails as well.

I should like to suggest a further advantage of Reisman's innovation, one not explicitly stated in the book. The rigid view of imputation that he opposes threatens to undermine Mises's socialist calculation argument.3 Suppose that spending on consumer goods directly determines all other economic magnitudes. Then, if a socialist economy could establish prices for consumer goods, Mises's argument would dissolve.

Here disaster looms. Mises posed the calculation argument as a difficulty about capital goods; he conceded that a socialist economy could set prices for consumer goods. But this concession, combined with extreme imputationism, solves the calculation problem for socialism. (This, incidentally, was Schumpeter's reason for dismissing Mises's argument.) Unless one adopts Reisman's view, or devises another alternative to the imputationist view, the socialist calculation argument must be abandoned.

Mises, with characteristic insight, fully grasped this difficulty. In a passage of Human Action that has not received the attention it deserves, Mises refers to

Professor Schumpeter's dictum according to which consumers in evaluating consumers' goods 'ipso facto also evaluate the means of production which enter into the production of these goods.' It is hardly possible to construe the market process in a more erroneous way. (Human Action, Scholar's Edition, p. 354)

Reisman shows himself ever alert to defend capitalism against objection, and I found especially impressive his demolition of Marx's argument that profit derives from exploiting labor. According to Marx,

Against Marx's argument, Reisman deploys an argument that I have not previously encountered. He contends that Marx's theory rests on a fundamental mistake. If, under capitalism, profits are deducted from wages, then wages must be the original source of income. But, our author contends, this is false: "In the precapitalist economy, only workers receive incomes, and there are no capitalists and no money capital. But all the incomes that the workers receive are profits and none are wages" (p. 479).

Profits come first, and therefore they cannot be explained by the prior existence of wages. A Marxist might respond, I suppose, by claiming that even if precapitalist income was entirely profit, matters alter once capitalism is in place. But this seems an unpromising line to pursue.

The book contains a few questionable points: The brief remarks on the history of economic thought neglect the contributions of writers before Adam Smith, most notably the Spanish scholastics (p. 1). "Louis Bodin" should be "Jean Bodin" (p. 6). And Murray Rothbard's views about the Cold War did not ever make him "an admirer of the Soviet Union" (p. l, n. 15, emphasis omitted).

Nevertheless, Professor Reisman has written one of the outstanding treatises of modern economics. It is immensely long: its double-columned pages make it, in my estimation, twice the length of Human Action. Tennyson's line "But I go on forever" will, I fear, sometimes come to the reader's mind; but time devoted to this masterly work is well spent.4