True Patriots Must Have Clogged Noses 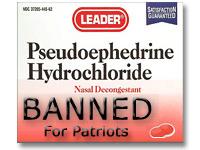 It begins with a runny nose, always in early December when the weather gets colder and nature emits strange particles. I'm speaking of the eternal menace of the winter cold, which, experience suggests, can be prevented from turning to flu or other yucky infections by keeping symptoms at bay.

Thus should the company that invented pseudoephedrine — a drug made from "yeast fermentation of dextrose in the presence of benzaldehyde," says Wikipedia — be heralded by one and all. I'm happy for those who need far-flung laser surgeries that such technologies exist, but, speaking from the point of view of self interest, the company that can make a tiny pill to unclog my nose earns my deepest gratitude.

And how we have all taken it for granted. We stock up on those little red pills — red like Christmas — all season long, so that days are bright and nights are restful. Oh there's also the liquid form, which has a flavor you come to love as much as the finest liqueur made by French monks. Why aren't the pills sold in packages of 100, 1,000, or 5,000? Well, in any case they should be. They are our seasonal friend, as much a part of the calendar as Thanksgiving.

And yet this year, matters are different.

I can vaguely recall last year that there was more hassle than ever getting these wonders of modern medicine, which, incidentally are made for us by our capitalistic friends in India and China. This year, manufacturers are touting a replacement drug called phenylephrine. Hey, I'm glad to give anything a try but this replacement was not brought about by market forces. The government last year cracked down on pseudoephedrine, and the manufacturers were compelled to come up with something else. So of course I'm suspicious.

"Hey, is this new stuff as good as the old pseudoephedrine?" I asked the pharmacist.

He wrinkled his nose and shook his head. "No, I don't think so."

"Ah ok, well, how can I get the real stuff?" I asked. He then requested my drivers' license and reached behind him and handed me one package.

"Umm, can I please have ten?" I asked, explaining that this process is a pain and so I might as well stock up.

"You mean I have to buy it, go outside and come back in, buy another, and so on until I reach ten?"

"No, you can't do that," he replied. "You can only buy one package per month."

Now, I've always thought about this drug the way we think of milk or oranges or socks. If any of these items started to be limited in supply by government decree, what's the reaction? A slight bit of panic. I immediately began thinking of workarounds. So this means that I have to remember to buy from April to October when I don't usually need the stuff so I can be sure to have it.

But won't one package a month be enough? Maybe. Probably. But what if I share it with co-workers, as I often do? What if I leave it in a coat pocket that is dry cleaned or a pants pocket that is washed? Or what if I want to keep one package at home and one at work? What about large families with kids in their early teens? What will they do?

It's not so much that I will certainly need more. It's just that one would like to opportunity to buy more if one so desires. There's nothing like a step toward prohibition to cause a run on a product!

Maybe now is the time to try one of those online drug places of uncertain locale? Well, a quick check shows that most require the same ID as the drug store. What do I have to do? Find a dealer on the street?

In any case, what is the big deal here? Is this all to make sure that Americans must live with stuffy noses a few days a month? Is that what we pay these birds in Washington to do for us?

A close investigation turns out to reveal what most people probably already know: you can use this drug to make another drug called methamphetamine, which is a stimulant that causes euphoria of some sort. I read online that it was invented in the 19th century, and has been mainly used for recreational purposes and also as a stimulant for soldiers in wartime (when drug-induced euphoria is certainly valuable).

So apparently some stupid kids were cooking pseudoephedrine and turning into methamphetamine. The government doesn't want people to experience euphoria on a regular basis and decided to do something to stop it. But does meth cause death? This "deadliest drug" has apparently killed a few hundred people in the last six years, so far as anyone can tell. Also, so far as anyone can tell, the use of the drug peaked decades ago, according to Jack Shafer. In 1975, 16.2 percent of teens said that they had taken amphetamines, where as only 3.4 percent said that in 2004.

What about the process of making meth from nose medicine? This site gives the recipe as follows:

750 pills containing pseudoephedrine, five lithium batteries, two cans of lantern fuel, a bottle of drain cleaner, a bottle of un-iodized salt, a 10-pound block of dry ice, and various lab supplies: mason jars, coolers, coffee filters, a hose. Depending on the proclivities of the cook, there are substitutes for many of these ingredients. Instead of coffee filters, for instance, some cooks prefer linens. One recipe recommends Martha Stewart brand bedding because of its tight weave and low cost.

What strikes me here is not the crazy fuss that is involved here but the need for 750 pills. That's far more than I apparently have the right to purchase.

As for how much of a national epidemic this is, I have no firm data. Every published discussion of this that I could find only refers to the existence of a problem — how much of a problem is hard to say. In any case, from my point of view, if someone wants to go to all the above effort to fry his brain with meth, that's his own business. A general principle of a free society is that people are free to do stupid things to themselves, and so the government doesn't and shouldn't treat people like children.

Where did the legislation that makes it so difficult for me to unclog my nose come from in the first place? The intrigue continues. It was passed on March 6, 2006 — as an amendment to the Patriot Act! It was this that required the drug store to collect information from my driver's license so that the government can have a complete database of all Americans with clogged noses. It was this act that said that I may not buy more than a certain amount per month. State governments followed up with their own laws.

Patriots had better not dispute it. All Patriots must learn to live with clogged noses. And please report all people who seem to be breathing effortlessly to the authorities.

Finally, there should be a limit on the numbers of Martha Stewart bed sheets that people can buy (see the above recipe for meth). Maybe one set per year. Those who want more are probably up to no good.)