The Trouble With Child Labor Laws 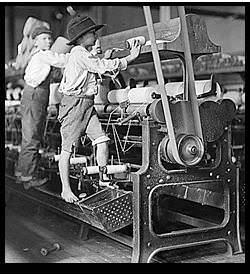 Let's say you want your computer fixed or your software explained. You can shell out big bucks to the Geek Squad, or you can ask — but you can't hire — a typical teenager, or even a preteen. Their experience with computers and the online world is vastly superior to that of most people over the age of 30. From the point of view of online technology, it is the young who rule. And yet they are professionally powerless: they are forbidden by law from earning wages from their expertise.

Might these folks have something to offer the workplace? And might the young benefit from a bit of early work experience, too? Perhaps — but we'll never know, thanks to antiquated federal, state, and local laws that make it a crime to hire a kid.

Pop culture accepts these laws as a normal part of national life, a means to forestall a Dickensian nightmare of sweat shops and the capitalist exploitation of children. It's time we rid ourselves of images of children tied to rug looms in the developing world. The kids I'm talking about are one of the most courted of all consumer sectors. Society wants them to consume, but law forbids them to produce.

You might be surprised to know that the laws against "child labor" do not date from the 18th century. Indeed, the national law against child labor didn't pass until the Great Depression — in 1938, with the Fair Labor Standards Act. It was the same law that gave us a minimum wage and defined what constitutes full-time and part-time work. It was a handy way to raise wages and lower the unemployment rate: simply define whole sectors of the potential workforce as unemployable.

By the time this legislation passed, however, it was mostly a symbol, a classic case of Washington chasing a trend in order to take credit for it. Youth labor was expected in the 17th and 18th centuries — even welcome, since remunerative work opportunities were newly present. But as prosperity grew with the advance of commerce, more kids left the workforce. By 1930, only 6.4 percent of kids between the ages of 10 and 15 were actually employed, and 3 out of 4 of those were in agriculture.1

In wealthier, urban, industrialized areas, child labor was largely gone, as more and more kids were being schooled. Cultural factors were important here, but the most important consideration was economic. More developed economies permit parents to "purchase" their children's education out of the family's surplus income — if only by foregoing what would otherwise be their earnings.

The law itself, then, forestalled no nightmare, nor did it impose one. In those days, there was rising confidence that education was the key to saving the youth of America. Stay in school, get a degree or two, and you would be fixed up for life. Of course, that was before academic standards slipped further and further, and schools themselves began to function as a national child-sitting service. Today, we are far more likely to recognize the contribution that disciplined work makes to the formation of character.

And yet we are stuck with these laws, which are incredibly complicated once you factor in all state and local variations. Kids under the age of 16 are forbidden to earn income in remunerative employment outside a family business. If dad is a blacksmith, you can learn to pound iron with the best of 'em. But if dad works for a law firm, you are out of luck.

From the outset, federal law made exceptions for kid movie stars and performers. Why? It probably has something to do with how Shirley Temple led box-office receipts from 1934–1938. She was one of the highest earning stars of the period.

If you are 14 or 15, you can ask your public school for a waiver and work a limited number of hours when school is not in session. And if you are in private school or home school, you must go ask your local Social Service Agency — not exactly the most welcoming bunch. The public school itself is also permitted to run work programs.

This point about approved labor is an interesting one, if you think about it. The government doesn't seem to mind so much if a kid spends all nonschool hours away from the home, family, and church, but it forbids them from engaging in private-sector work during the time when they would otherwise be in public schools drinking from the well of civic culture.

The legal exemption is also made for delivering newspapers, as if bicycles rather than cars were still the norm for this activity.

Here is another strange exemption: "youth working at home in the making of wreaths composed of natural holly, pine, cedar, or other evergreens (including the harvesting of the evergreens)." Perhaps the wreath lobby was more powerful during the Great Depression than in our own time?

Oh, and there is one final exemption, as incredible as this may be: federal law allows states to allow kids to work for a state or local government at any age, and there are no hourly restrictions. Virginia, for example, allows this.

The exceptions cut against the dominant theory of the laws that it is somehow evil to "commodify" the labor of kids. If it is wonderful to be a child movie star, congressional page, or home-based wreath maker, why it is wrong to be a teenage software fixer, a grocery bagger, or ice-cream scooper? It makes no sense.

Once you get past the exceptions, the bottom line is clear: full-time work in the private sector, for hours of their own choosing, is permitted only to those "children" who are 18 and older — by which time a child has already passed the age when he can be influenced toward a solid work ethic.

What is lost in the bargain? Kids no longer have the choice to work for money. Parents who believe that their children would benefit from the experience are at a loss. Consumers who would today benefit from our teens' technological knowhow have no commercial way to do so. They have been forcibly excluded from the matrix of exchange.

There is a social-cultural point, too. Employers will tell you that most kids coming out of college are radically unprepared for a regular job. It's not so much that they lack skills or that they can't be trained; it's that they don't understand what it means to serve others in a workplace setting. They resent being told what to do, tend not to follow through, and work by the clock instead of the task. In other words, they are not socialized into how the labor market works. Indeed, if we perceive a culture of sloth, irresponsibility, and entitlement among today's young, perhaps we ought to look here for a contributing factor.

The law is rarely questioned today. But it is a fact that child-labor laws didn't come about easily. It took more than a hundred years of wrangling.2The first advocates of keeping kids out of factories were women's labor unions, who didn't appreciate the low-wage competition. And true to form, labor unions have been reliable exclusionists ever since. Opposition did not consist of mining companies looking for cheap labor, but rather parents and clergy alarmed that a law against child labor would be a blow against freedom. They predicted that it would amount to the nationalization of children, which is to say that the government rather than the parents or the child would emerge as the final authority and locus of decision-making.

To give you a flavor of the opposition, consider this funny "Beatitude" read by Congressman Fritz G. Lanham of Texas on the US House floor in 1924, as a point of opposition to a child-labor ban then being considered:

Consider the Federal agent in the field; he toils not, nor does he spin; and yet I say unto you that even Solomon in all his populous household was not arrayed with powers like one of these.

Children, obey your agents from Washington, for this is right.

Honor thy father and thy mother, for the Government has created them but a little lower than the Federal agent. Love, honor, and disobey them.

Whatsoever thy hand findeth to do, tell it to thy father and mother and let them do it.

Six days shalt thou do all thy rest, and on the seventh day thy parents shall rest with thee.

Go to the bureau officer, thou sluggard; consider his ways and be idle.

Toil, thou farmer's wife; thou shalt have no servant in thy house, nor let thy children help thee.

Thy children shall rise up and call the Federal agent blessed.

In every way, the opponents were right. Child-labor laws were and are a blow against the freedom to work and a boost in government authority over the family. The political class thinks nothing of legislating on behalf of "the children," as if they are the first owners of all kids. Child-labor laws were the first big step in this direction, and the rest follows. If the state can dictate to parents and kids the terms under which teens can be paid, there is essentially nothing they cannot control. There is no sense in arguing about the details of the law. The critical question concerns the locus of decision-making: family or state? Private markets or the public sector?

In so many ways, child-labor laws are an anachronism. There is no sense of speaking of exploitation as if this were the early years of the industrial revolution. Kids as young as 10 can surely contribute their labors in some tasks in ways that would help them come to grips with the relationship between work and reward. They will better learn to respect private forms of social authority outside the home. They will come to understand that some things are expected of them in life. And after they finish college and enter the workforce, it won't come as such a shock the first time they are asked to do something that may not be their first choice.

We know the glorious lessons that are imparted from productive work. What lesson do we impart with child-labor laws? We establish early on who is in charge: not individuals, not parents, but the state. We tell the youth that they are better off being mall rats than fruitful workers. We tell them that they have nothing to offer society until they are 18 or so. We convey the impression that work is a form of exploitation from which they must be protected. We drive a huge social wedge between parents and children and lead kids to believe that they have nothing to learn from their parents' experience. We rob them of what might otherwise be the most valuable early experiences of their young adulthood.

In the end, the most compelling case for getting rid of child-labor laws comes down to one central issue: the freedom to make a choice. Those who think young teens should do nothing but languish in classrooms in the day and play Wii at night will be no worse off. But those who see that remunerative work is great experience for everyone will cheer to see this antique regulation toppled. Maybe then the kids of America can put their computer skills to use doing more than playing World of Warcraft.